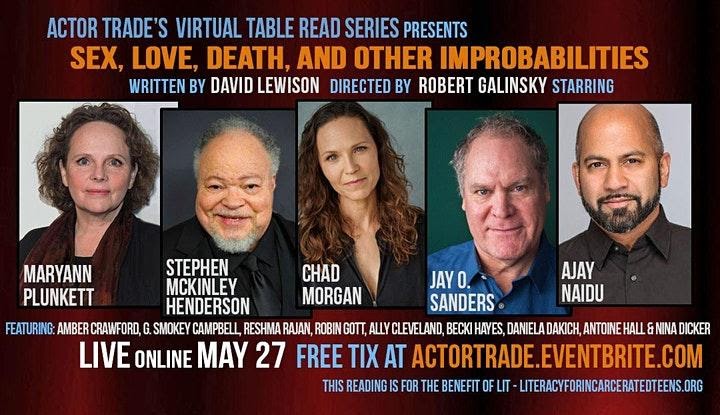 The Actor Trade Table Read Series features live table readings of stage plays and screenplays and is designed to bring working actors together for the pleasure of online audiences worldwide. Each “episode” of the series also highlights a charity and the work they are doing. The online event is FREE, but RSVPs are required at Eventbrite.

From raunchy bars to cheap motel rooms, from isolated apartments to a seedy movie theater, Sex, Love, Death, and Other Improbabilities follow characters who are in search of romance, or meaning, or even just a simple moment of human connection. Eight short tales show these women and men in their sometimes desperate, often fanciful, and frequently surprising encounters. Blending comedy and drama with touches of both tragedy and farce, these diverse stories of loves both lost and found resonate with quirky unexpectedness and with unexpected moments of redemption and reward…

Suzanna BowlingMay 16, 2022
Read More
Scroll for more
Tap
Used And Borrowed Time
What to Watch in The New Year: May 17