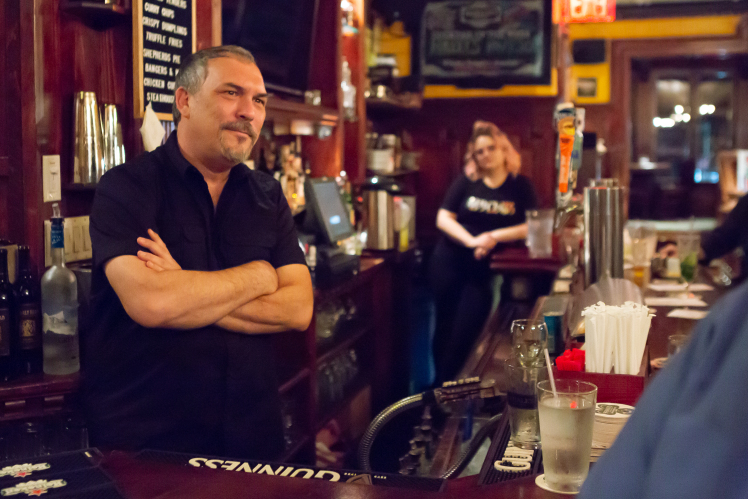 Ross
It’s a fun loud environment that you enter when attending the inventive new show upstairs in the McHales Bar just off of 8th Ave on 51st. It’s right across the street from two hit musicals on Broadway, Wicked and Once on this Island, but Overheard in Joe’s couldn’t be more different. Created and directed by Christian Kelty with a cast of six improv actors, this interactive barroom chat of a show showcases a rotating roster of special musical guests, with the iconic Michelle Shocked being featured the night I went.  I must admit that she is and was the biggest draw for me, the thing that made me definitively say yes to the press invite. And it’s her voice that ushers us into this interactive bar experience and it’s a voice of strong conviction and soulfulness drenched in the blues. It’s a gift that I have missed for years, and a great entrance into this collective chat on forgiveness, emotionality, and connection. Her voice and performance is strong and emotionally rich. I only wish she was featured more and more as I’d snap my fingers along with her any day of the week. I did wonder later on if that was a fierce bit of acting she put on in the end, because if it was, you had me completely in your power, making me feel uneasy and concerned. A feeling I had trouble shaking.
The man behind the bar, Christian Kelty has a great story sitting on ice back behind the draft beer fonts, a family history that leads this reinvention of a immersive form held dearly in his heart.  Pulled from his familial past, this is an ode to Josephine and her speak-easy, when speaking to one another was exactly that: easy and fun, and an integral part of the neighborhood bar experience.  My partner in crime that night was overjoyed to experience this talkback approach to theatre (I’m not sure I can call him a true theatrejunkie like myself, but I knew he’d love Michelle Shocked, and he always loves a good beer at a bar, so it just seemed natural to invite him). The cast of six improv actor/patrons; Andy Hilbrands, Jay Malsky, Mary-Alice McNab, Sarah Nowak, Adrian Sexton, and Adam Sullivan, help Kelty keep us on track; guiding us with a steady but softly applied hand to our backside. They keep the talk going through a thinly structured pathway of conversing on what it means to get in touch with our feelings and share our emotional selves with our neighbors. He tells us to pull up a bar stool, grab a drink, and share a story, or just sit back and listen. I’m not sure I’d call this theatre, but an immersive experience of what it means to be human. My guest that night told me after the show that some of his best nights out were much like this one, when organic conversation amongst bar patrons blossomed out of nowhere with strangers ending up as friends. At Joe’s, trust and betrayal are on the bar menu, and in many different forms. Friends are told to ask for forgiveness, and others are asked to come to terms with what is being revealed. Tantrums and truths fly wide and high. And although the dialogue sometimes feels forced or gets stalled, this talented crew of actors nudge it back on track and do their best to keep the drink-fueled conversation flowing. They have a nack for gently pulling most of us into the game using a pleasantly applied probing question here and there from the appealing Kelty. Half of me wanted to be addressed, as did my guest, but the other half wasn’t so sure.
I must admit that seeing the word ‘interactive’ printed anywhere near the word ‘theatre’ always makes me sweat a bit. I was hoping, as was the case one night at A Hunger Artist, the one man show I saw in the East Village last year, that when the actor on stage pointed his finger at me (true story), an older man one row in front of me insisted it was he who was pointed at, even as the solo stage artist argued against. Luckily for all he went up on stage and was infinitely better at the task laid out before him than I would have been, especially without my reading glasses. But here at Overheard, the questions posed were made with such a warm and inquisitive nature, that my heart rate never accelerated nor did my hands shake or my voice betray myself. I shared my thoughts, and much to my surprise, had the urge on and off throughout the 100 minute talk party to add my 2 or 3 cents to the proceedings. It’s not as easy as it sounds for this soul, but I was surprised by the inclination. And the show is all the better for that open warm feeling of caring and sharing.  It was a fun and memorable night, something unique and surprising, and even with the unsettling tantrum that happened as the show strutted its way to the end, one that I had a hard time shaking off, the speaking was good and easy at Joe’s, and a breath of some new air at 51st and 8th. I’ll have a second round, if you don’t mind.

Suzanna BowlingJune 18, 2022
Read More
Scroll for more
Tap
Desperate Measures and This Ones For The Girls Set for Performances on the Intrepid Sunday
BenDeLaCreme’s Rising Up Into Dante’s Inferno Down Below