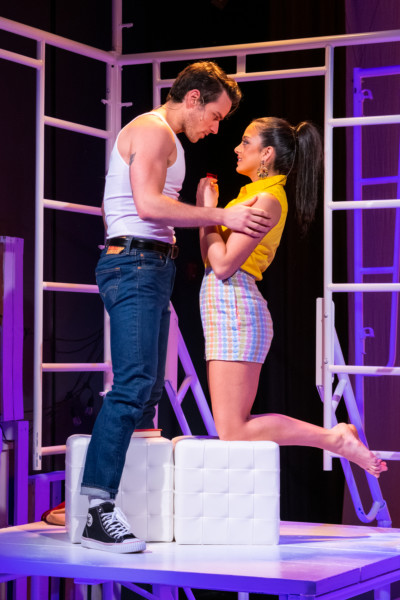 Thanks to a Brooklyn guy (Michael Notardonato) wanting to get into a Brooklyn girls pants (Ari Raskin), he tells her the story of how Romeo (Nikita Burshteyn) time traveled to 1960 and in Verona met a Brooklyn Girl on vacation named Bernadette (Anna Kostakis), who he believed is his Juliet. This foulmouthed mobster’s (Carlos Lopez ) daughter is crass, foul mouthed, self indulgent and beautiful. Ms. Kostakis has the “it” factor in spades, but more on that later.

This bada bing bada boom tale titled Romeo & Bernadette A Musical Tale of Verona and Brooklyn is like Moonstruck mixed with The Soprano’s and is laugh out loud funny thanks to Mark Saltzman’s book and lyrics. The most clever part of this whole piece is the songs are all adapted from classic Italian melodies and arranged with panache thanks to Steve Orich.

Director and choreographer Justin Ross Cohen breathes life into what could have been an absurdist idea and has made it fun, making over the top Italian stereotypes lovable thanks to his stellar cast that is fresh and uber talented.

As we follow Romeo (Nikita Burshteyn) to Bensonhurst, we meet two warring crime families, the Del Cantos and the Penzas. Romeo, protects Dino Del Canto (Notardonato) when Bernadette’s fiancé, Tito Titone (Zach Schanne) tries to take him out. Bernadette’s father explains “Non La Famigl” when he hears of the blunder, but Tito is hot headed and abusive to Bernadette. When the soft spoken, Shakespeare speaking Romeo hears this, he has Don Del Canto (Michael Marotta), who has taken him in like a son help him in his pursuit not knowing that Bernadette is the daughter of the rival family.

Bernadette’s mother, Camille, (Judy McLane), helps Romeo when she learns he is from Verona, as she is from Veronese descent. She sings the wonderful “Farewell, Verona,” and almost brings down the house. The opera singing Lips (Viet Vo) protects Bernadette and the Penza family. Bernadette’s best friend Donna (Ari Raskin), falls for Dino (Michael Notardonato) and in the end Romeo gets his Bernadette.

Troy Valjean Rucker’s wonderful voice makes this show a showcase for his talent, as he takes on several roles. Notardonato shines with his suave crooning style and stellar acting. This whole cast is really fabulous, but it is newcomer Anna Kostakis who just got off the bus and landed this role, that had me saying this is a girl to watch. Looking a little like Marisa Tomei, she has the “it factor in spades”.

The four-member band, led by music director Aaron Gandy, sounds flushed out and this cast can sing like the caneries.

The set designed by Walt Spangler uses white scaffolding and light up boxes that are rather ingenuous. Simple, yet highly effective. I loved Fabio Toblini and Joseph Shrope’s costumes for the women and Ken Billington’s lighting was sublime.