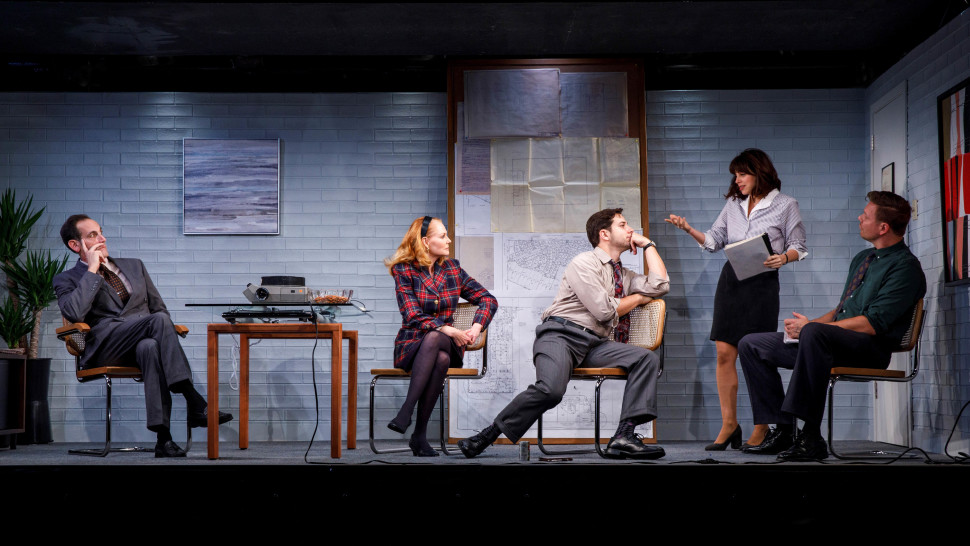 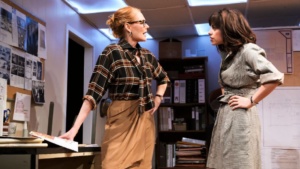 “They told me it wasn’t like this anymore. Why is it still like this?” states Eliza (Krysta Rodriguez) to a female co-worker, Janice (Marg Helgenberger). The problem here is Janice has adopted the “team player” attitude and doesn’t stir the pot in Theresa Rebeck’s, What We’re Up Against. About ten minutes into this play I realized I saw a fabulous production last year handled with aplomb by Life Force Arts, Inc. and director Lorca Perez. Everything I thought about that production holds true now. The workforce is still sexist and if you are talented in a man’s world, they will try to put you down. Here, the men down expensive scotch, curse up a storm, vomit vulgarities that would make Trump look saintly, and think calling women the “C” word is acceptable. 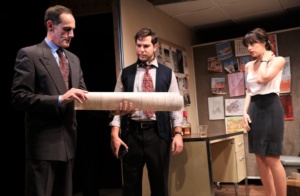 Hitting the architecture firm’s glass ceiling for five months, Eliza has confronted her supervisor, Stu (Damian Young). She has turned in plans for a 6-million-dollar strip-mall redesign, with a solution to an air duct problem that nobody can solve. She credits the plan to Weber (Skylar Astin) so that she can see just how sexist this firm is. Webber, who is lower on the totem pole, is a kiss ass described as the “golden boy”, and more importantly, he is a man in a man’s world. Webber is all talk, but no action and Eliza is sick of a man with less seniority getting all the breaks. When she reveals the deception, Stu is out for blood…Eliza’s. He complains to Ben (Jim Parrack) who is agreeable with the “no women” in the workplace clause. When Ben hears that Eliza has solved the problem, he wants to see those plans. Instead, Stu adds Janice to the team. When Eliza hears this, she storms in with threats of going above Stu to the head of the company, David, because she is his hire and he considers her “eight times smarter than the rest of the department”, and in truth she is. To placate Eliza, Stu gives her a low paying job Janice was to accomplish. When she does just that, the wolves are out for more of her blood. In a meeting, Janice throws Eliza under the bus, as does everyone except Ben. In the end, Eliza prevails, but at what cost to her soul? 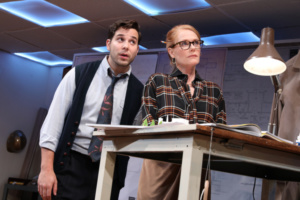 What We’re Up Against shows how sexism remains entrenched to the bowels, even in an upscale workplace. Men are not just the enemy; women turn like backstabbing vipers when their place is threatened. 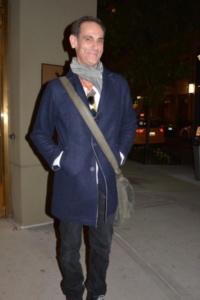 What is never explained is why Eliza doesn’t just go to David. There are a few twists and turns that could be cleaner. 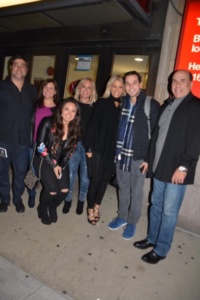 Skylar Astin and his family Photo by Rose Billings

Damian Young starts off with a banter that puts Mamet to shame and we understand every word. He has the biggest arc in the play. Krysta Rodriguez takes what could have been a role written for a shrew and makes her rabid with ferocity, but allows us to see the venerability underneath. Skylar Astin is the perfect kiss ass. Marg Helgenberger is wasted but does well, and Jim Parrack holds his own. 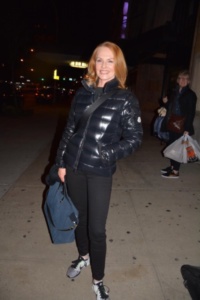 Adrienne Campbell-Holt doesn’t bring out the layers as much as Ms. Perez did, and I found myself comparing the two productions, with Life Force Arts, Inc. bringing a much more well-rounded production. 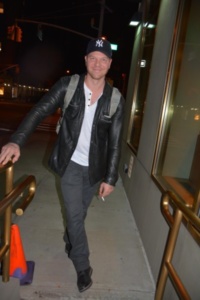 The bi-level set by Narelle Sissons gives us a parallel view. Telly Grimes’ costumes are disjointed and do not tell us what the time frame is, but Grant Yager’s lighting is well done. 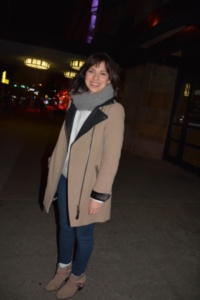 Written in 1992, Ms. Rebeck’s play is dark, timely, foulmouthed, juicy, and seems like it is placed in the 50’s, not now, but the truth is we have not come a long way baby. We delude ourselves if we think we have.

What We’re Up Against: The Women’s Project at McGinn/Cazale Theater, 2162 Broadway, until Nov. 26th.