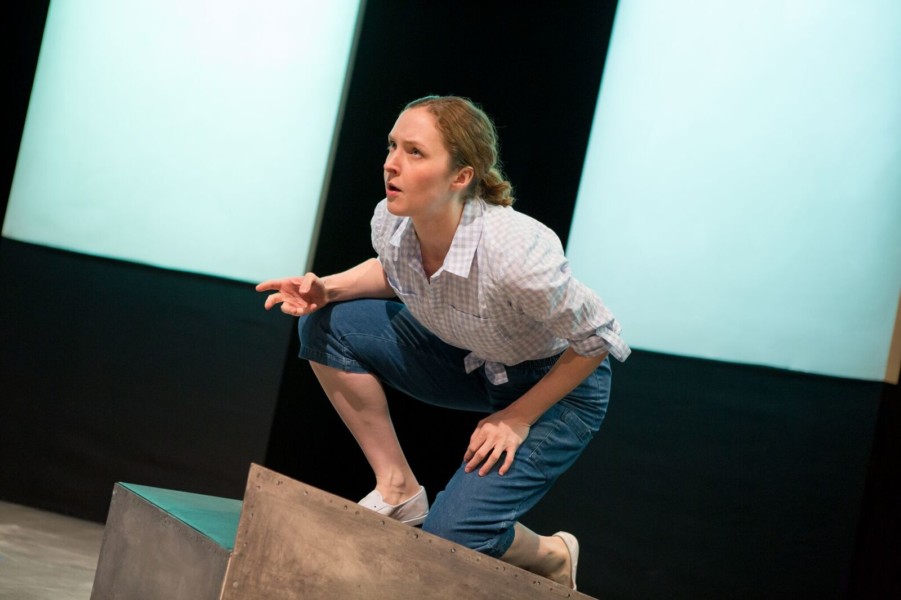 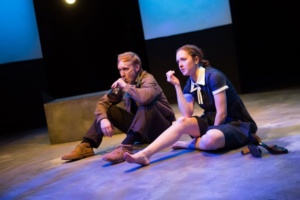 Laurel Ollstein’s new play they promised her the moon, produced by the Miranda Theatre Company, contains history that I had not known. Focusing on a privately run program to test women for spaceflight in the early 1960s, they promised her the moon, tells the story of Jerrie Cobb (the terrific Amanda Quaid). We first meet Cobb, as she is being put through an endurance test run by Randy Lovelace (a muffled Edmund Lewis), the NASA contractor who performed the tests on the official Mercury astronauts. We then go back into Jerrie’s life and meet a series of people who influenced her including her mother (a shrill, Polly Mckie) and her supporting, proud and loving father (a warm, John Leonard Thompson). When she meets the leading woman in American aviation in 1960, Jackie Cochran ( The equally wonderful Andrus Nichols), the play finally picks up. 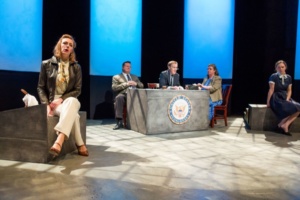 Cobb and eleven other women pass the physical testing equivalent to that being done by NASA, Ms. Cochran who did not meet the qualifications for testing, believed she had been deprived of a leadership role in the program. Although she and her husband funded the Pensacola testing for the 12 women, the Pensacola testing had not been authorized and the military would not move forward. As Cobb gets more and more press, Cochran annoyed at Cobb’s recognition  sabotages the women’s efforts.

For the next five years Cobb resentful of the backstabbing, flew missionary operations in the Amazon. The play ends when Cobb discovers Cochran’s death. 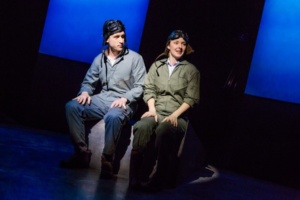 This really would have been a more interesting play, if the focus had been on the two women and not the early life and affair she was suppose to have had with Jack Ford (the comedic and romantic John Russell). If Cobb had this affair, I could not find it and knowing the time this is set, I don’t see how, if this was common knowledge, how she would have been allowed into the space program, knowing the moral and ethic code of the time.

Also the play ends when Jackie Cochran dies, which is August 9, 1980. Cobb, who had a strong Christian background is smugly content. Wouldn’t a better ending have been when Sally Ride went into space in 1983 saying “well we finally did it,” or in 1986 when Sharon Christa McAuliffe died trying to go to space, stating “I guess it wasn’t my time to go home.” Both of these would have been more appropriate, from what I have read.

The play did make me want to learn more and the show is well staged by Valentina Fratti. 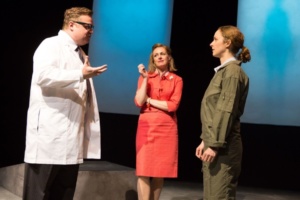 Women are not always on each other’s side and this play proves that point.

they promised her the moon: Miranda Theatre Company at Theatre at St. Clements,423 West 46th St, until May 27th.

A look at the future of women in science, technology, engineering and math (May 21 after the 3 p.m. performance_, featuring Melissa Lane, a senior scientist at the Planetary Science Institute, and Girls Who Code co-founding president Nicole Valencia.

― And a conversation about the challenges of portraying famous women (May 22 after the 7 p.m. performance), featuring Amanda Quaid, who plays Jerrie Cobb, and Andrus Nichols, who plays Jackie Cochran, a pilot and sponsor of the Mercury 13 program.