Things To Do in NYC: Ocean Wonders: Sharks! 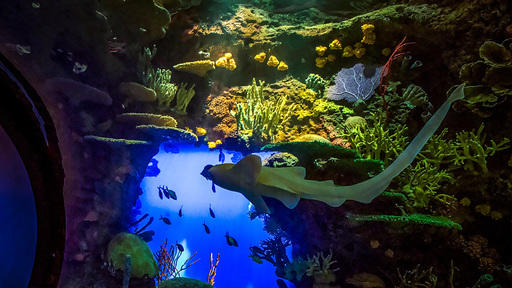 Things To Do in NYC: Ocean Wonders: Sharks!

The New York Aquarium was founded in 1896 in Castle Clinton in Battery Park, at the southern tip of Manhattan. In 1902, the New York Zoological Society (now Wildlife Conservation Society) assumed ownership of the aquarium. Although the location of the Aquarium has moved, first from Castle Clinton to the Bronx Zoo before moving to its current home on Coney Island in 1957, the WCS commitment to connecting New Yorkers to ocean wildlife at the Aquarium has never wavered.

Ocean Wonders: Sharks! is home to 18 different kinds of sharks and ray species. Go below the surface and meet the amazing animals, including sharks, rays, sea turtles, and more, that live right off the Coney Island Boardwalk.

There is also an exhibit called Spineless where Pacific octopus, moon jellies, zombie worms, and more. Weird and wonderful invertebrates may lack backbones, but they’re the backbone of our ocean. See them up-close and learn why.