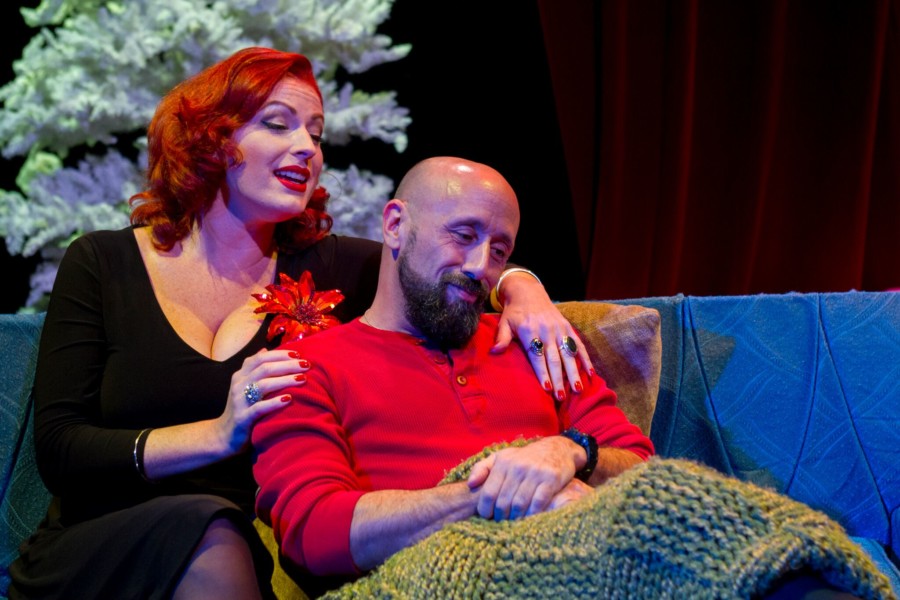 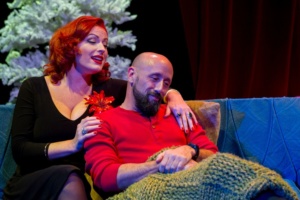 Add at the top of your holiday wish list, tickets to the delightfully snarky, This Way Outta Santaland (And Other Christmas Miracles). After eight seasons playing Crumpet the Elf in David Sedaris’ The Santaland Diaries, Mitchell Fain has crafted his own unique holiday tale, a semi-autobiographical cabaret for grownups only. This satirical account will melt your heart while splitting your sides. Tender one moment, then forked tongue the next, this naughty elf preens and projects for nearly 90 minutes of four-letter-word peppered, utterly captivating, raucous holiday happenings. Joined by powerhouse Meghan Murphy on vocals and Julie B. Nichols on piano, Fain is in rare form, walking down a memory lane paved with cobblestone and emotional landmines. You will find yourself doubled over in nonstop laughter from his multiple quips and cutting diatribes. 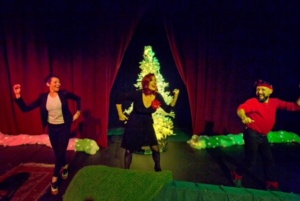 Self-described as the “Jewish Christmas Icon you see before you” Fain detailed the hard truths and frank story telling being born the gay son in a “family where we were all born without ambition.” Escaping to the songstresses of his childhood, the “Holy Trinity; Judy, Liza and Barbra” Fain’s rapid-fire delivery rips off the scabs of his many childhood truths much like ripping of a band-aid, complete with the requisite stings. Confiding in the audience his own journey of coming out to his personal Autie Mame, a flamboyant aunt who served the curious youth truths, along with a delicious smorgasbord of snacks, or a “plate of pickies” as he described it, this contemptuous, recollection of the day to day of his childhood, always told with tongue firmly planted in cheek, thoroughly engaged. 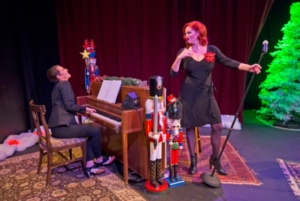 Directed by Jeremy Wechsler,  this one man showcase eclipses anything Santa could stuff in your stocking. The droll details will lift the spirit of any Windy City Grinch. Fain’s ability to turn the emotion of his life story on a dime proves once again this singular sensation is the most captivating of Christmas Elves. He spontaneously traded shoes, mid-performance, with real-life former roommate Murphy, strutting around the stage with ease in her stilettos. Quickly sharing they were both the same shoe-size, Fain also quipped he once spied her walking up the stairs to their shared apartment, quickly grabbed a paid of her highest heels, and as she opened the door to enter their abode, he stood, washing dishes in nothing but her stylist footwear and a smile. Oh the stories these two could share, and share they did. 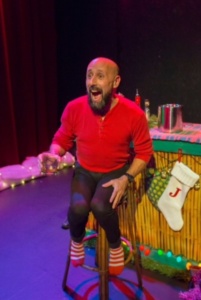 Be prepared, a master improviser, Fain interacted repeatedly with various members of the audience throughout the show. Adorned in candy cane striped socks and skinny jeans, our master of ceremonies cracked jokes, sang songs, including Have Yourself a Merry Little Christmas in the guises of Katherine Hepburn, Cher and Judy Garland, and worked continuously, fever-pitched, for the appreciation and applause of his faithful audience. As a backdrop, Courtney O’Neill’s living room set was adorned to the hilt with festive holiday regalia, including a magnificent tree and fireplace stockings. The “snow” falling outside of the mid-set window was a nice added touch.

If you are looking for an adult-themed escape from the overly commercial, family-forced merriment of the holiday season, point your sled (or cab, uber or lyft) in the direction of This Way Outta Santaland (And Other Christmas Miracles), pronto. Numerous naughty worded monologues will delight away any amount of real world holiday blues. As derisive as he is hysterical, Fain’s wicked delivery will bring a smile to any face, and I never say no to listening to Murphy’s brand of bawdy brilliance. Naughty has never proved so nice.
Theater Wit’s This Way Outta Santaland (And Other Christmas Miracles) is now playing through December 30, 2017
Related ItemsChicagoChristmastime TreatMeghan MurphyMitchell J. FainNewStephen BestTheatre WitThis Way Outta Santaland (And Other Xmas Miracles)
Out of Town