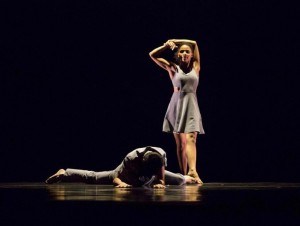 Celebrating its 16th annual incarnation of all things dance, Thodos Dance Chicago once again challenges its talented team to push the boundaries of movement to music. Titled, aptly enough, New Dances, this annual concept employs the existing company within Thodos Dance Chicago, then pushes carefully selected dancers to take their next evolutionary step, choreograph original pieces of their own. Selecting  music and movement, partnering with a team of costume designers and lighting technicians, they craft unique experiences in dance for a Windy City audience to appreciate. To assist with the nurturing process, each newly crowned choreographer is gifted a three-month development period to work on bringing their distinctive visions to robust life. There were nine pieces total on display this season. While each had moments of poignancy, there were two exceptional vignettes which really stood out from the rest.  I will get to those in a moment. The event began with Founder and Artistic Director, Melissa Thodos, unveiling the brand new 25th anniversary logo for Thodos Dance Chicago. She next introduced distinguished alumni, including Brock Clawson, who spoke of his time as a former Artistic Associate/Choreographer with the troupe. He reflected on his “passion for dance” and the “fundamental training” he received while there. His time spent at Thodos clearly engendered a solid foundation which has aided him in becoming a distinguished choreographer in his own right, working with the Joffrey Ballet and choreographing the remarkable The Who’s Tommy at the Paramount Theatre and most recently, the well-received Company at the Writers Theatre.  After personally baring witness to pieces of Clawson’s current work, Tommy blew me away, it was enlightening to learn he honed his talents locally. 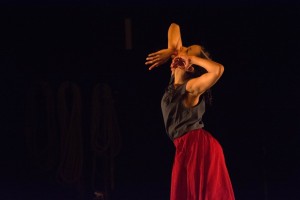 Of the nine segments of work on display, the fifth and the final pieces were the most prominent of the evening.  Show A Little Taste, choreographed by Hattie Haggard and set to a series of musical snippets, including the familiar John Williams “Cantina Band” theme from movie, Star Wars, proved clever, attention grabbing and was by far the funniest vignette in the showcase. A team of ten dancers were clad in black aprons over androgynous costumes, designed by Moriah Lee Turner. With the principal dancer in a chef’s hat, a lip-syncing master of ceremonies, as it were, the rest of the crew were frantically stirring bowls of powder and purposely tossing  flour through the air and onto the stage from their collective apron’s pockets. While the music slowed and sped up pace, so did the dancers’ movements. Goofy, with a hint of romance, flamboyant and overly exaggerated gesturing helped to make this piece stand out from the rest.  Fabulously frenetic, Haggard absolutely delivered. The final piece of the showcase, Mambo Clap Wozam Slap, with its sexy choreography from Tenley Dorrill, stood out as well. Ten dancers in a colorful fury of hot blooded movement was the passionate ending the show deserved. Combining elements of soul, funk, and jazz music with zealous and sensual salsa and samba movements, the biggest audience reaction occurred as this piece was brought to life before our eyes. Free, liberated, suggestive and brazen, what a remarkable and sizzling finale. 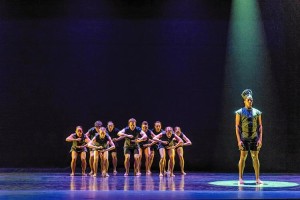 The remaining pieces had fleeting moments of promise and potential.  Briana Robinson’s Uncovering featured a series furious, energetic arm movements as an evolving quartet of dancers represented the juxtaposition of strength and fragility. Alex Gordon’s Residue took a seemingly aquatic approach, with grey and salmon color costuming crafted by Katherine Goldberg, when partnered with the graceful arm and leg movements of the troupe, gave the impression of watching exotic fish cavorting in a stage wide tank. The strength resonating from Shannon Alvis’ Sunrise with 6 dancers, split into three sensual couples, sharing ever-evolving stage focus, was palpable. This piece had both impressively lyrical  lifts and robust leg extensions. Present Voices from choreographers John Cartwright and Danielle Gennaoui was a departure. Starting with a bold flicker of light, simulating a gun firing, the remainder of the ambitious piece had authoritative and athletic dancers actually speaking in short phrases or grunts of heavy breathing while the piece unfolded. The frantic aftermath purposely disjointed. On The Greener Side, fashioned by Brennen Renteria, featured dancers sporting red, orange and coveted green visors to demonstrate the grass is not always greener on the other side. The resulting imagery reticent of fast food service works scurrying about the stage, like ducks in a shooting gallery. The remaining two numbers, Abby Ellison’s Everywhere But Here and R.O.C.B. helmed by Jessica Miller Tomlinson, took extraordinarily traditional approaches to modern dance.  If this production were to be remounted in its entirety, I would drop one of these last two. Neither proved distinctive enough to warrant the double inclusion, both had such similar flavored pedestrian approaches.

Overall, New Dances is an invigorating and celebratory night, blending up-and –coming talent with melody to create stunningly visual compositions. Cultivated in the City of the Big Shoulders, Thodos Dance Chicago has proven itself a solid launching pad for tomorrow’s innovators, bringing to life the next generation of dance talent, crafting contemporary and (hopefully) powerful works. This new generation being nurtured, sculpted and guided toward a future in the performing arts industry. Like last year, my biggest complaint is the fleeting performance schedule. There are just two opportunities to catch New Dances. This diverse group of emerging talents’ from Thodos Dance Chicago New Dances 2016 craves to be seen.