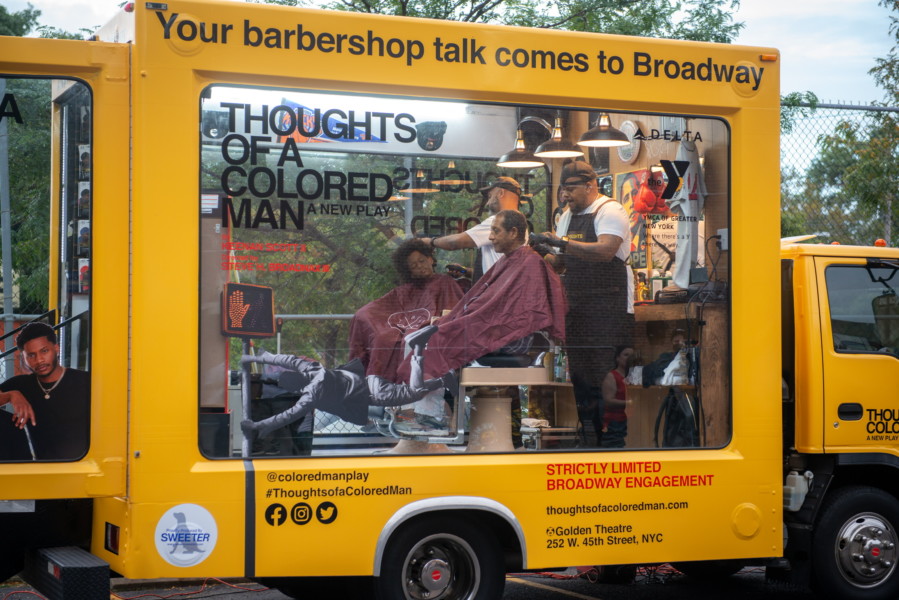 In partnership with the YMCA of Greater New York, Thoughts of a Colored Man hosted a Youth and Community event at the Castle Hill YMCA in the Bronx and the North Brooklyn YMCA where there was a Mobile Barbershop ready to treat community members to free haircuts. Community members were also treated to a BBQ food truck, merchandise from the play, and free tickets to see Thoughts of a Colored Man on Broadway.

Cast members Tristan Mack Wilds, Luke James, Esau Pritchett and Bjorn Patty joined playwright Keenan Scott II and producer Brian Moreland at the Brooklyn YMCA event.  They spoke to the crowd, checked in on the barbers an took a lot of selfies.

Producer Brian Moreland said, “Thoughts of a Colored Man is a show based upon love for family, and community. Like the YMCA, Broadway is a community open for all, and we are thrilled to bring a little Broadway and whole lot of heart to Brooklyn and the Bronx!”

Inspired by the conversations that freely flow within Thoughts of a Colored Man, cast members TBD mixed and mingled with local community members in attendance. Playwright Keenan Scott II joined in on the fun and was given a quick cut inside of the Mobile Barbershop. Scott, in his excitement surrounding the event, decided to give community members a sneak peek of the show and performed a scene.

“It’s a powerful moment when children first see themselves represented and reflected in a Broadway show,” said Marjorie Jean Jacques, Executive Director of the North Brooklyn YMCA. “That’s why the North Brooklyn and Castle Hill YMCAs are so proud to be partnering with Thoughts of a Colored Man and Delta Air Lines to bring the Barbershops and Broadway experience to the Bronx and Brooklyn. Not only do the arts promote social emotional learning, they also provide mirrors and windows to the world for children, which is even more critical as our communities emerge from the pandemic.

Thoughts of a Colored Man will mark the Broadway debuts of both Scott and Broadnax. Scott’s new play The Migration LP is in development at New York Stage & Film and Broadnax most recently directed Katori Hall’s new play The Hot Wing King which received the 2021 Pulitzer Prize for Drama.

Thoughts of a Colored Man had its critically acclaimed world premiere at Syracuse Stage under the artistic direction of Robert Hupp in fall of 2019 with a subsequent run later that year at Baltimore Center Stage (Stephanie Ybarra, Artistic Director).

As the sun rises on a single day in the pulsing heart of Brooklyn, seven Black men are about to discover the extraordinary – together. By Keenan Scott II, one of today’s boldest new voices, Thoughts of a Colored Man blends spoken word, slam poetry, rhythm, and humor into a daringly universal new play. Welcome to the vibrant inner life of being Black, proud, and thriving in the 21st century.

This richly theatrical mosaic shines brilliant light onto these men, a tight-knit brotherhood, revealing their most triumphant selves. Their vibrant and vulnerable experiences and feelings reverberate far beyond the barbershops and basketball courts of their community. They reveal the deeply human hopes, joys, sorrows, fears, and dreams of all men, all people.

For nearly 170 years, the YMCA of Greater New York has been helping all New Yorkers reach their full potential. As New York City’s leading nonprofit community service and wellness organization, the Y empowers everyone, no matter who they are or where they’re from, by providing access and opportunities for all to learn, grow, and thrive. We provide a place to play, to be healthy, and to give back. We give parents childcare, young adults job training, seniors a way to connect, and children a safe place to go. By bringing people together from different backgrounds, perspectives, and generations, the Y improves overall health and well-being, ignites youth empowerment, and connects and supports diverse communities across New York City.  Follow us on Facebook, Twitter, and Instagram at @ymcanyc.