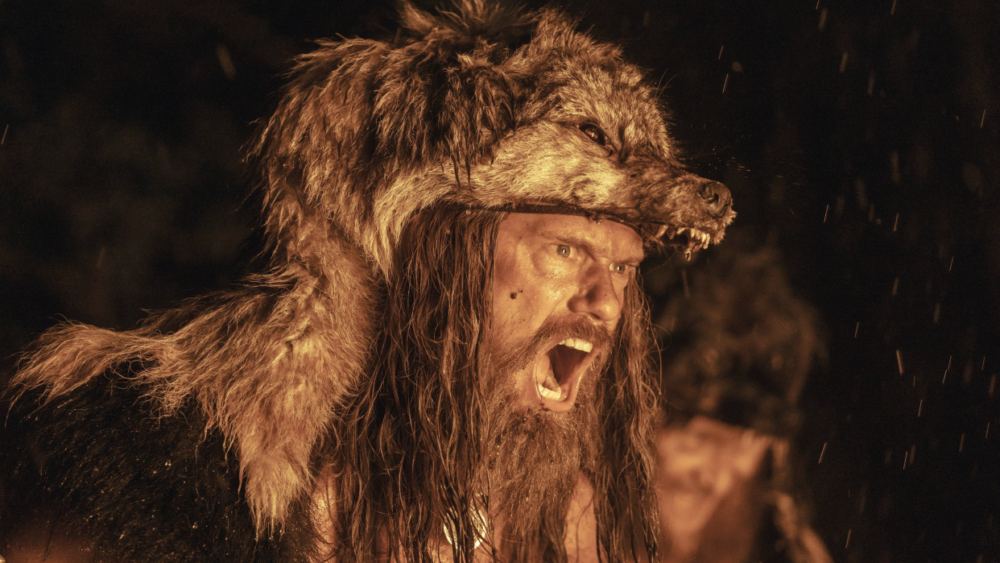 While Iceland might have inspired “The Northman,” Ireland provided much of the actual landscape pictured in director Robert Eggers’ decidedly eccentric third release. There was a further connection to Eire, as well. Nearly a thousand years ago, Vikings had invaded the island so their brutal culture had an impact on the inhabitants back then who were brutal enough on their own. Nonetheless, Iceland’s dramatic atmospherics of volcanoes and a dark, brooding environment became a unique character in this film.

Skarsgård had been wanting to make a Viking film for a while. Born in Stockholm on August 25th, 1976, the Swedish actor began at seven but quit at 13. After serving in the Swedish military, Skarsgård landed in the American comedy “Zoolander.” In 2008, he joined the miniseries “Generation Kill” but his real breakthrough came when he portrayed vampire Eric Northman in the television series “True Blood” (2008–2014). After appearing in such films as 2011’s “Melancholia,” “Battleship” and “The Legend of Tarzan,” Skarsgård starred in the drama series “Big Little Lies” (2017–2019). That earned him a Primetime Emmy Award, a Golden Globe Award, a Critics’ Choice Television Award and a Screen Actors Guild Award. From 2019 to 2022, he appeared in the films “Long Shot” and “Godzilla vs. Kong.” He also played Randall Flagg in the miniseries “The Stand” (2020–2021) and guest-starred in the series “Succession.”

After the two met to discuss possible collaborations, the pair decided to make the film Eggers’ third project. Eggers began his career as a New York theatre designer and director before transitioning into film work. Born July 7, 1983, the film director, screenwriter, and production designer became known for his acclaimed supernatural horror films, 2015’s “The Witch” (which starred Anya Taylor-Joy) and 2019’s “The Lighthouse.”

Much of the cast joined in 2019 and filming took place throughout Ireland between August and December 2020 on a $70–90 million budget. Its world premiere was in Stockholm’s Rigoletto Cinema on March 28, 2022 and began a global theatrical release schedule throughout April culminating in the United States on April 22. Having already grossed over $23 million worldwide, it received critical acclaim, with praise aimed at its direction, production values, and the performances.

Nonetheless, for all the vaunted visual eccentricities found in Egger’s earlier two films, this taut feature provides a mixed bag of hyper-dramatic moments, with almost parodic touches of a Marvel Superhero film and some weird mystical flourishes. While Egger’s visual intensity drives the movie, it lacks the richer character development and plot elements that would have made it much more than just an artistic Conan the Barbarian-like savage tale. 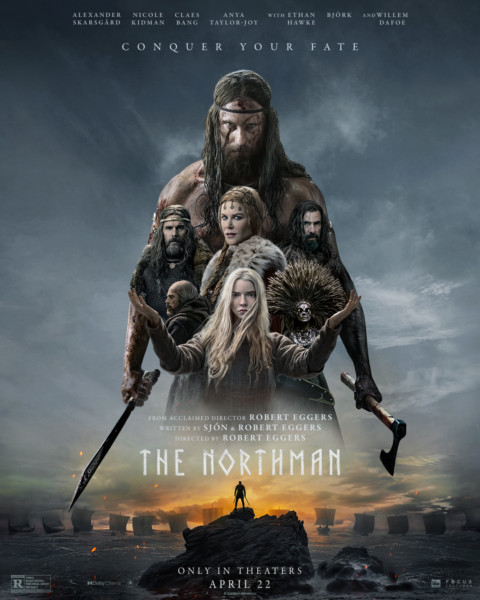 Set in A.D. 895, “The Northman” follows Viking prince Amleth on a quest to avenge his murdered father, King Aurvandill War-Raven (Hawke). After having returned from his overseas conquests, the king reunites with Queen Gudrún (Kidman) and the prince — his son and heir — upon return to his kingdom on the island of Hrafnsey. The two participate in a spiritual ceremony overseen by Aurvandill’s jester, Heimir (Dafoe). The next morning, Aurvandill’s brother Fjölnir (Bang) and his masked warriors ambush and assassinate the king. After seeing his village massacred and his mother taken away screaming by his uncle, the young Amleth flees by boat swearing revenge for his slaughtered parent, to save his mother and kill Fjölnir. 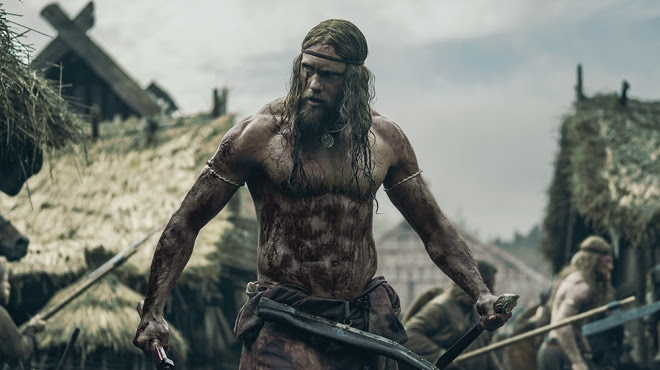 Life is hard, cold and unembellished by much art or pleasantries except for orgiastic rituals and torturous tests of strength and endurance amidst the sheer force of 10th century Iceland. Like “The Last Samurai” or “Dances With Wolves,” this film offers a unique look into the native life of a Viking. Unfortunately, that cultural exploration is underplayed in exchange for mystical machinations and intensely bloody battles.

After the assassination, 10 years pass and Amleth has been raised as an old Norse “berserker,” attacking settlements throughout Europe — even as far away as the land of Rus. The now-biff battler sneaks aboard a slave ship heading to Iceland. Posing as a slave, he encounters Slavic Olga (Taylor-Joy), who claims to be a sorceress now enslaved. Upon arrival, everyone is taken to the farm that’s now Fjölnir’s, having lost his kingdom years ago. There it is revealed that beautiful Gudrún, now Fjölnir’s wife, has borne him a son, Gunnar (Elliot Rose).

Through various plot twists (Amleth learns that his mother hated her first husband since she was a captured slave whom he raped), Amleth and Olga (now pregnant with his twins) keep working towards Fjölnir’s demise, killing off his tribe and bloodline. Ultimately, Amleth frees the slaves, who kill most of Fjölnir’s men, while Gudrún and then, Gunnar, are stabbed to death. Fjölnir discovers the bodies and schedules a final battle with Amleth at the Gates of Hel — the volcano Hekla. At the lava-spewing peak, they thrash at each other in a fierce sword fight. Fjölnir is decapitated, but Amleth is fatally stabbed through the heart at the same time. As he dies, Amleth has a future vision of Olga embracing their twin children. He seemingly ascends to Valhalla while shedding his first tear since his father’s murder.

All is well and good, passionate and powerful. But so much of what might have been an insightful exploration of Viking life — especially while the young prince was growing up under their tutelage — is sacrificed for battle, blood and gore. I’m glad to have gone off to the North but I was left a bit cold from the arduous experience.

Suzanna BowlingJune 26, 2022
Read More
Scroll for more
Tap
Cabaret, Talks and Concerts For May
Events in May Have to Do With Flowers, Festivals, Art and Biking