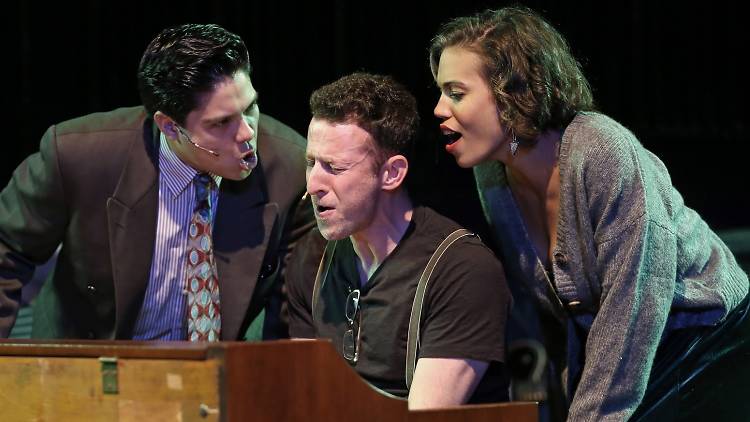 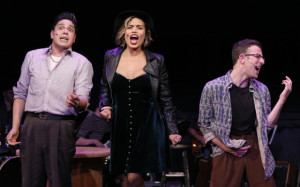 The revival of Tick, Tick…Boom!” by the Keen Company is energetic, well sung and a slice of time captured by the late Johnathan Larsen. The show which was written before Rent never had a life until playwright David Auburn, changed this one man show to a three person show about a songwriter turning 30. 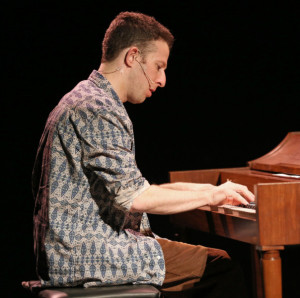 We are back to 1990. Jonathan (Nick Blaemire) is about to turn 30 and the clock in his head is like a sonic boom.  He hasn’t had a hit show, he works as a waiter, his career is on hold and his girlfriend Susan (Ciara Renée) wants to start a family and move away from New York.  His best friend, Michael (George Salazar), gave up acting to work on Madison Avenue. He has money to spend on a Beemer, expensive ties and  life that makes Johnathan’s look scrappy. Johnathan  has banked his world on his new rock musical, “Superbia.” He plans to take Broadway and Sondheim by storm.The next morning it is Jonathan’s thirtieth birthday Susan, is leaving to start a new life without him. She gives him a thousand sheets of blank manuscript paper. They agree to write. Michael encourages him to write and  Stephen Sondheim calls to meet and discuss “Superbia.” Johnathan realizes he is surrounded by friends and that his talents are finally being recognized. The tick tick booms are softer now. 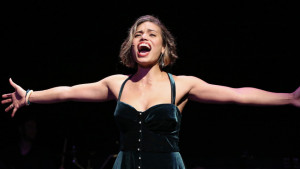 Mr. Blaemire looks like Larson, he brings comedy and empathy for the character. He is filling big shoes as the role was previously played by Raul Esparza and Lin Manuel Miranda. Ms. Renée in a fabulous green dress brings style, a great voice and flare. Mr. Salazar is a stand-up guy very reminiscent of Oliver Platt. The thing missing here like Holiday Inn is chemistry and a sense of urgency for time running out. The stakes never seem high enough,

Jonathan Silverstein’s obviously loves this material, but his direction is all over the place. The vocal arrangements, and orchestrations by Stephen Ormus are so well done, thanks to musical director Joey Chancey, who brings out the best in this material. I never realized what a fabulous song “Louder Than Words.”

For a musical journey Tick, Tick…Boom!” is the show to see.