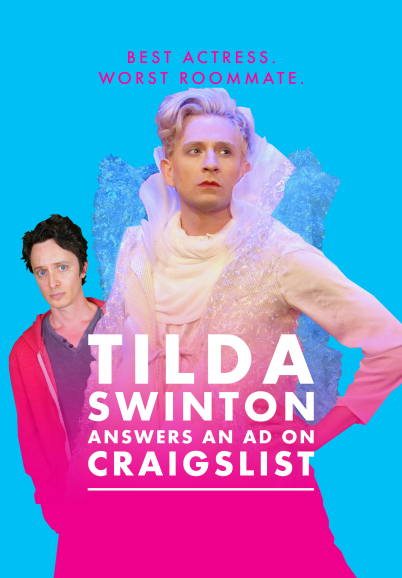 Tilda Swinton Answers An Ad on Craig’s List and Snap, The Job’s a Game

Tilda Swinton Answers An Ad on Craig’s List and Snap, The Job’s a Game 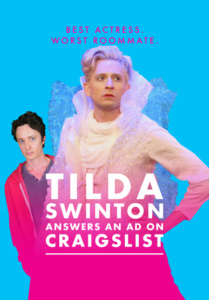 I’ve only been to the Laura Beechman Theatre on 42nd Street and 9th one other time, and that was for a private cabaret birthday party, so I can’t really count on that to inform me of anything. But I can tell you this: that I was not really prepared for on that cold wintery night in Hell’s Kitchen. It felt like I had entered into a fun, handsome-gay-man-filled cabaret bar, and not just in the way that one feels on numerous occasions at the theatre when a play like Angels in America or Boys in the Band is on stage (PS: I can’t wait for these two!). For this production of Tilda Swinton Answers An Ad on Craigslist, the audience reminded me of the crowd that might gather at a weekly drag show, something like Mona Foot’s Star Search (and I’m totally aging myself now just by naming that night, as she hasn’t set foot in the Barracuda Bar in ages). I slowly figured out that this theatre, the small intimate cabaret lounge downstairs from the West Bank Cafe, was the home of numerous drag themed shows that nightly graced the stage like LeScandal, Distorted Dizney, and Battle of the Bitches! starring Jackie Beat and Sherry Vine, and this was their core and adoring audience of regulars. They had all gathered to see this absurd and very funny comedy that I was told may be more to my liking after seeing the foul-mouthed comedy, Koalas are Dicks in the East Village a few months ago.

And I have to say, the man spoke the truth.  Koalas are Dicks is a stupid fratboy dirty-mouthed version of the movie, “Ted” (a film that I had never seen, nor do I want to) starring a talking TV star Koala that definitely had a substance-abuse problem and a very bad attitude. Neither of these tales, made up of adolescent humor and ridiculousness are my cup of tea, nor was I their intended audience, but this one, Tilda Swinton…(for short) was a bit more up my alley. It’s ridiculous, most definitely, but in the best way possible; (almost) smart as a whip, crackling with often silly jokes but inventive set-ups, anchored with solidly thoughtful and ludicrous comical performances by a cast of seriously funny actors, that know that the biggest laughs come from something deeper than a dirty stupid joke. Most of the time.

Cutie pants Bryon Lane, the smart and funny playwright of Tilda Swinton…, stars as sad-sack Walt, who finds himself sitting alone in an apartment that once was home to him and his now ex-boyfriend Bobby, played with oblivious sexy but obnoxious charm by the very good Mark Jude Sullivan (Pan Am).  His food delivery is all wrong, just like his life that is collapsing down around him, and the only thing left for him to do is to end it all… just after he gets off the phone with Wanda, a wonderful Jayne Entwistle (“Feud“), about the disgusting pickles on his just-arrived burger.

A bottle of pills await him, as he shuffles around feeling sorry for himself, and then with a screech of “Hello? Hello? Doorbell sounds! Knocking sounds! Boredom, confusion, grinding of teeth!” in flows Tilda Fucking Swinton, played to the max by the terrific Tom Lenk (“Buffy the Vampire Slayer“, Broadway’s Rock of Ages); wise beyond her 56 years of age, with shocking, bleached-blonde spiky short hair and wearing an all white ensemble with a stunning, flowing coat that pops with every turn on her heel. She’s carrying a giant fluffy designer bag that is just like that ‘fabulous solver of all problems that could possibly exist in the world for any Jane or Michael’. She is the legendary Mary Poppins. But she is no Julie Andrews (or even the 2018’s version, Emily Blunt), Swinton is the off-centered Mary Poppins channeled by the iconic Oscar-winning actress, fiercely talented and much admired by an eclectic audience hungry for her particular brand of brave and often strange performances. This is Walt’s Mary Poppins (Not the Walt of Disney’s), the one that has answered an ad placed on Craigslist for a roommate, and although unbeknownst to Walt, she has arrived to claim her space. So with an iconic ‘snap’ and a swift slap of some not-very-common sense, Swinton is here to clean this mess up, hilariously, but not with a pretty song or magic trick, but with some hard-ass truths and ridiculous method acting-styled examination and dissection of his sad pathetic life.  Swinton has decided that she is going to play Walt in her next big movie. “I’m impressed by your glumness, irritability, profound worthlessness. The only thing that would make you a better character for me to study is if you were suicidal.” This gender bending portrayal of the type she is known for, is going to give her that second Oscar, so she may rise above the ranks of those other ‘Single Oscar Winning’ Actresses (Yes, we are looking at you Monique) and join the ranks of the Two. A much deserved honor, one that she can’t quite believe hasn’t happened already. So, in the immortal words of Poppins; “In every job that must be done, there is an element of fun. You find the fun and snap! the job’s a game“.

And what fun this game is. All the other characters that make up Walt’s little aimless and isolated world swing by the apartment, each for their own reasons, unaware that the grande dame Swinton will be there to put them into their place with a comic jab and twist. Entwistle and Sullivan are both on hand to play numerous roles that flit in and out of that busy apartment, each expanding Swinton’s study of Walt, and making more and more sense of his predicament.  It’s a smart and sassy interrogation that is hysterically and surprisingly cathartic, and even when it starts to feel repetitive and possibly over the top ridiculous, the sense of fun and adventure never quite seems to go too far away.

As directed by Tom DeTrinis, Tilda Swinton…, a show that was originally produced at the magnificent Celebration Theatre in Los Angeles by DeTrinis, Jay Marcus, Nathan Frizzell and Lenk, is just the kind of fun you’d like to have on a cold winter Sunday night in Hell’s Kitchen.  And they even serve food and drinks, for you and for the hungry and very thirsty star as well.  So kick back, order a drink, and enjoy the ride. This is no Shakespeare, or even an inspired “Orlando“, but you’ll be touched both in your heart and your funny bone. It’s just a spoonful of sugar to help the medicine (of life) go down in a most delightful way.

Genevieve Rafter KeddyMay 10, 2022
Read More
Scroll for more
Tap
A Conversation about Designing for a New Generation
The Low Road Tries Valiantly To Hit the High