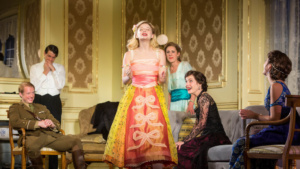 J.B. Priestley’s 1937 play, Time and The Conways, has a lot to teach if only we can grasp the simplicity of its message. We first meet Mrs. Conway (Elizabeth McGovern, Downton Abbey) and her four daughters and two sons in northern England in 1919. It is Kay’s (Charlotte Parry) twenty-first birthday and a celebration that The Great War has ended. With the future seeming so bright, how could this night foretell the future? Kay dreams of being a serious novelist, despite her family’s mockery. Hazel (Anna Camp) intends to marry wealthily and travel. Carol (Anna Baryshnikov) wants to be on the stage, but Madge (Brooke Bloom) is a socialist in a wealthy family. As for the boys; Alan (Gabriel Ebert) is content being mundane, but Robin (Matthew James Thomas), who has just returned from the war, is the golden child and believes everything he will do will be successful. Their father is gone due to a drowning and their mother demands center stage, all the while doting on her children to the point of claustrophobia. 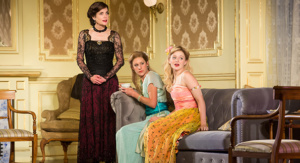 At the party, we also meet Gerald (Alfredo Narciso), the family solicitor, who Madge has a secret crush on but who is madly in love with Joan (Cara Ricketts) whose heart belongs to his brother, Robin, and Ernest (Steven Boyer), a young, ambitious entrepreneur of a lower social class, who has set his sights on Hazel, much to her displeasure. Right near the end of the party, Kay has a vision. 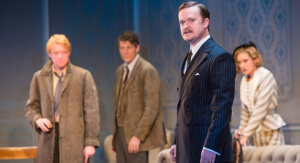 Act Two plunges us into 1937 and the same room, only things are not the same. The Conways have gathered due to a summons from their mother. All their lives have failed in different ways. Carol is dead. Kay is a journalist, but she covers “hack” stories and not the novel she dreamed of writing. Hazel is now married to Ernest, who is wealthy, but a sadist and has never traveled. Madge is a bitter schoolmarm and Robin married Joan, but has become an alcoholic and has left her. Mrs. Conway has spent all their fortunes and they are broke. Only Alan has remained the same. As they all depart, Alan tells Kay that the secret of life is to understand its true reality, that time is linear. If we can see time as eternally present, that at any given moment we are seeing only “a cross-section of ourselves”, then we can transcend our suffering and find no need to hurt or have conflict with other people.

Act Three brings us back to 1919, to see how the downfall of the Conways happened. As the night unfolds, so does the hurt that will end up festering to destruction. Snobbery, social arrogance, and unrequited love become the seeds that erupt and eventually take down all in their path. Mrs. Conway claims to be able to foretell their future, but it is Kay who has seen this unfold. Remembering her vision, she asks Alan to promise that he will tell her something in the future.

Charlotte Parry is wonderful as Kay, showing us the subtle qualities of youth into someone seeing the future, which may not be so bright. I look forward to seeing more of her work. I was also impressed by Stephen Boyer (Hand to God) and Gabriel Ebert (Matilda), both playing against type and landing solid and mesmerizing performances. Elizabeth McGovern may be the star of this production, but I felt her performance was the weakest, lacking in demonstrative actions that would make us understand just how manipulative this woman is.

I did love Rebecca Taichman’s direction, which I found layered on so many levels, thanks to Neil Patel’s set. I do wish we all wore the lovely creations by Paloma Young and that style would come back into fashion. Simply glorious.

Maybe because this is how I look at life, but I found this play simplistically beautiful and I appreciated what it was trying to impart.

Suzanna BowlingJune 22, 2022
Read More
Scroll for more
Tap
Charm Reminds Us All On How To Behave
The Gospel According to Thomas Jefferson, Charles Dickens and Count Leo Tolstoy: Discord – Open That Door!