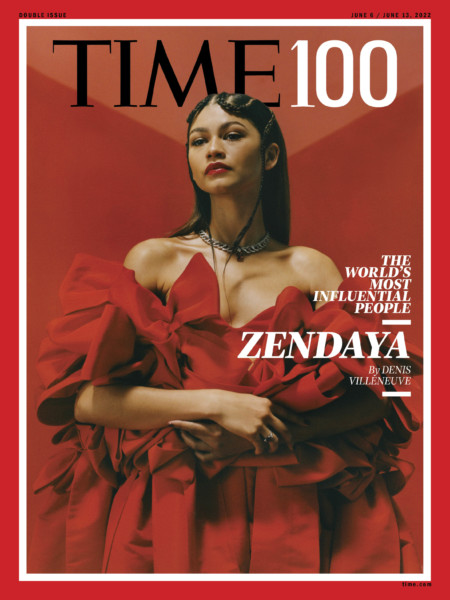 TIME reveals the 2022 TIME100, its annual list of the 100 most influential people in the world. The issue has 5 worldwide covers, each highlighting a member of the TIME100: actor Zendaya, Apple CEO Tim Cook, recording artist Mary J. Blige, Prime Minister Mia Mottley, and actor Simu Liu. 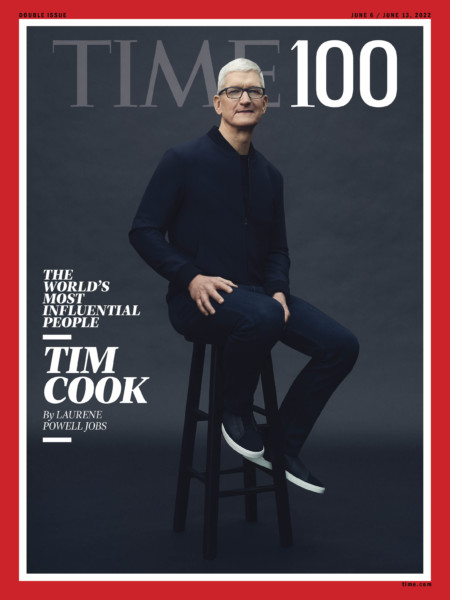 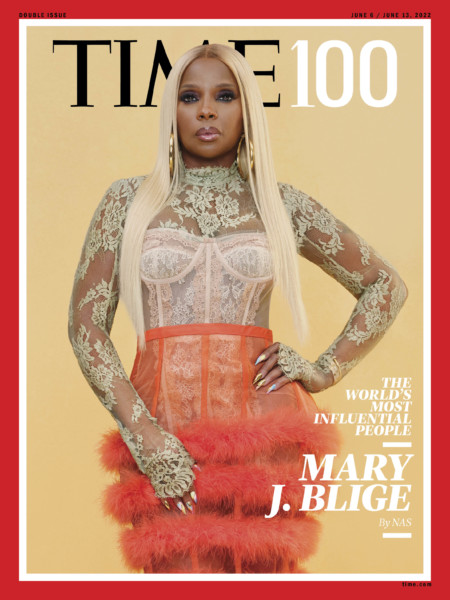 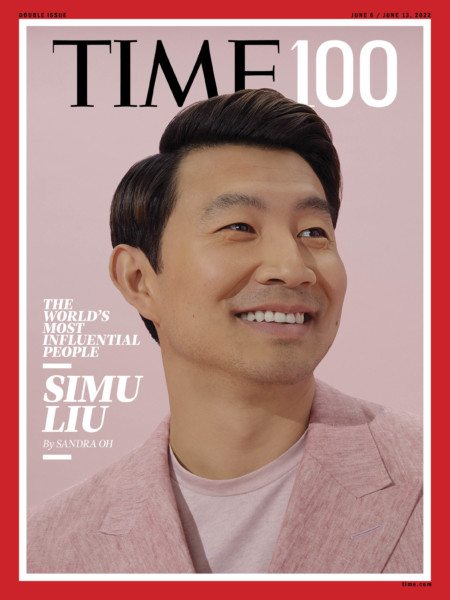 Of the 2022 TIME100 list, TIME editor in chief and CEO Edward Felsenthal writes, “Our hope is that the TIME100 list is not simply a recognition of influence but a study in how influence can be wielded… If crisis is going to unite us, we must find within ourselves that same empathy. The spectrum of leaders on this list, wielding influence in so many ways, is a reminder that we all have the option to use our power for good.” https://time.com/6179626/how-we-chose-time100-2022/ 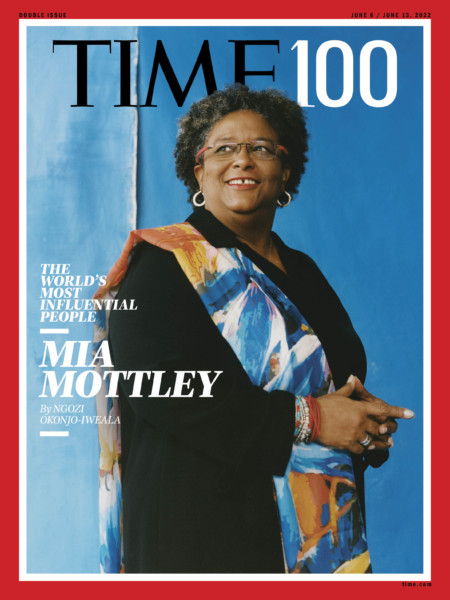 Nas on Mary J. Blige: “Mary came up the way we all did. She was a voice for us, but she wasn’t like other R&B artists at the time. She became a household name early because she was a hip-hop artist who also sang. The industry needed someone like that. The streets wanted that. Pop culture wanted that…… And when Mary came onstage at the Super Bowl halftime show this year, she got one of the loudest responses…She carved out a lane for herself, and now she can feed the people more than just music…. She became who she’s supposed to be.”

Laurene Powell Jobs on Tim Cook: “Apple is Tim Cook’s life’s work, and in this work, Tim displays mastery. Tim has demonstrated more range in his leadership of one of the world’s largest companies than any contemporary CEO. …Tim’s job demands not only business wisdom but also philosophical wisdom. The intense pressure of setting and executing Apple’s progression with deep precision, and of taking responsibility for the company’s effects on society, is almost unimaginable. Yet Tim does it with compassion and discipline, turning to nature to replenish his spirit.”

Denis Villeneuve on Zendaya: “She is an autonomous creative force herself. A cultural icon in the making. A person driven by pure inspiration, empathy, and respect for her craft, who uses authenticity as a new superpower. She seems fearless, her roots run deep, and I love that she still laughs like a kid. Zendaya is the future. And there is nothing more comforting to me. This is only the beginning.”

Sandra Oh on Simu Liu: “Simu has been working hard to get through closed doors, and now he wants to hold those doors open for others. You see him doing that through the way he speaks out against hateful violence, his openness about his own experiences of isolation and discrimination, his professional choices. He’s our superhero.”

Ngozi Okonjo-Iweala on Mia Mottley: “There are some who stand tall and stand out no matter where they are from—whether a large, densely populated country or a small island nation. Prime Minister Mia Mottley of Barbados is one such person. Bold, fearless, and possessing a great intellect and wit, the Prime Minister is a brilliant politician who knows how to shake things up… She is an embodiment of our conscience, reminding us all to treat our planet, and therefore one another, with love, dignity, and care.”

Joe Biden on Volodymyr Zelensky: “In President Zelensky, the people of Ukraine have a leader worthy of their bravery and resilience, as citizens across the country… fight for their homes and their freedom… The nations of the free world, inspired by the example of President Zelensky, are more united, more determined, and more purposeful than at any point in recent memory. With the support of the U.S. and our allies and partners, he has left his mark on history and proved to the world that Ukraine will long endure and its people will ultimately realize the democratic future they have long desired.”

Bill Clinton on Joe Biden: “On the global stage, President Biden has unified our democratic allies across Europe and around the world to isolate Russia and provide military and humanitarian assistance to the brave people of Ukraine, while restoring U.S. leadership on key issues including climate change, democracy, and human rights. We still face stern tasks, including taming inflation without causing a recession, and combatting violent crime. The usual sound bites and answers that dominate the news won’t help. But a get-the-job-done leader who cares more about the people than the polls, more about winning the future than rewriting history, will. That’s who Joe Biden is. And why I’m glad he’s on the job.”

Matthew McConaughey on Channing Tatum: “Unafraid to fear, confident enough to be the brunt of the joke, and playful enough to take the dare, Channing calls the youth in all of us out to play.Innocent sometimes, naive never, he’s a nine-lives sleight-of-hand magic trick by design and on purpose.He doesn’t handle his business in the game of Hollywood, he plays his game in the business of Hollywood.”

Cynthia Nixon on Sarah Jessica Parker: “She isn’t tall, but she is a giant—as a performer, producer, and businesswoman. And she is, quite simply, beloved. We love her glamour, her vulnerability, her fearless oh-so-skilled physical comedy, her sexiness, and her sweetness. But most of all, we love the essence of who she is… Because while superficial things about my friend have changed, when I look at Sarah Jessica, I see that same one-of-a-kind, diamond-in-the-rough 12-year-old. And I always will.”

Kara Swisher on Joe Rogan: “I’m probably the very last person you might pick to assess the power and meaning of Joe Rogan. While we both do long podcasts, we’re quite different in terms of origins (journalist vs. comic), tone (persistently tough vs. indefatigably curious), and content (just the facts vs. just asking questions—including to obvious charlatans)… Rogan has pioneered and plowed the fields like no other. To say he is big is an understatement… But he’s also gotten into a lot of trouble this year for resurfaced racial slurs he made—and apologized for—and being a place where COVID deniers get a very easy ride. It’s complicated, of course, but there’s no question that Rogan’s success is pretty simple: the former Fear Factor host has become the nation’s earworm.”

Ryan Seacrest on Kris Jenner: “When I was first introduced to Kris Jenner, she possessed everything you would envy in a person: charisma, confidence, and warmth… .I saw her fearlessness firsthand as she insisted the show include not only the family’s high points, but all its vulnerabilities as well. Since then, Kris has become the undisputed matriarch of reality television and is destined to be ranked among the top marketing minds in history… As the stabilizing core of an empire, she continually navigates the unexpected challenges of life and business with empathy, transparency, and endurance.”

Michelle Obama on Oprah Winfrey: Whether she’s talking to pop stars, Presidents, schoolgirls, scholars—or she’s asking you about your life over a glass of wine in the living room—Oprah has always had that uncanny ability to open us up, to hear beyond our words, and to uncover a higher truth, to be vulnerable with us in a way that allows us to be vulnerable back…. When Oprah connects with something—a person, a book, a song, an idea—she makes sure to shine her light on it. She validates it. She anoints it… That’s why no matter where you  go, everyone knows her name. And all of it makes me wonder: maybe her success isn’t rooted in the fact that she found a common denominator that unites us all. Maybe Oprah  is our common denominator.”

Elle King on Miranda Lambert: “Not a lot of people will take your hand, nudge you right into the spotlight, and share it with you…But that’s exactly what Miranda Lambert did in 2019, when she asked me to be a part of her Roadside Bars & Pink Guitars Tour, during which she brought along a new generation of artists to share her stage. It was Miranda’s idea to bring us all together—she wanted powerful female voices to front the whole thing. That’s her vibe: she’s all about making everybody feel welcome. And there is not one inauthentic hair on her head.”

Reese Witherspoon on Zoë Kravitz: “Zoë Kravitz defies definition. She contains multitudes and stands fully formed in her beauty, her intelligence, her grace, her humor, her strength. Part maverick, part savant, mostly just … cool…Working with Zoë on Big Little Lies, I discovered her hidden talent: her humor. She made me laugh during endless night shoots and always pushed the comedic tension between our characters onscreen.”

Jack Harlow on Pete Davidson: “Pete’s appeal to the world has everything to do with his authenticity. He doesn’t try to hide the person that he is. It’s a classic recipe for success and connection. I would consider myself truthful, but being around Pete makes me want to continue to reach even further for the realest version of myself. We don’t have another one of him. He’s daring, thoughtful, and simply hilarious. And he’s only 28. An icon with so much more left to accomplish.”

LeBron James on Quinta Brunson: “That’s the real beauty of Quinta’s brilliance. Using humor and nuance to connect people over everyday realities in order to improve them—for students, teachers, creators, and everyone who comes after her. Because it’s all about opening doors. Breaking down barriers. And doing it with love, kindness, and compassion. While still being an absolute boss like QB.”

Steve Ballmer on Andy Jassy: “Moving computing into the cloud is one of the great functional transformations of technology in my lifetime. Andy Jassy, who led Amazon Web Services (AWS) since its inception in 2003, was a great leader in that transformation. With AWS, he built one of the world’s most successful businesses…Hats off to him for what he’s done at Amazon over the last two decades and what he will accomplish going forward—even if I’m rooting for Microsoft when the two companies compete.”

Elizabeth Alexander, poet and president of the Mellon Foundation

Sun Chunlan, Vice Premier of the People’s Republic of China

The 16th annual TIME100 Gala, celebrating TIME’s list of the world’s most influential people, will take place on June 8, 2022. The event will feature performances by Mary J. Bligeand Miranda Lambert, as well as honorary tributes from members of this year’s list, remarks from TIME Editor-in-Chief and CEO Edward Felsenthal, and more.

Both events will take place at the Frederick P. Rose Hall, home of Jazz at Lincoln Center in New York City.