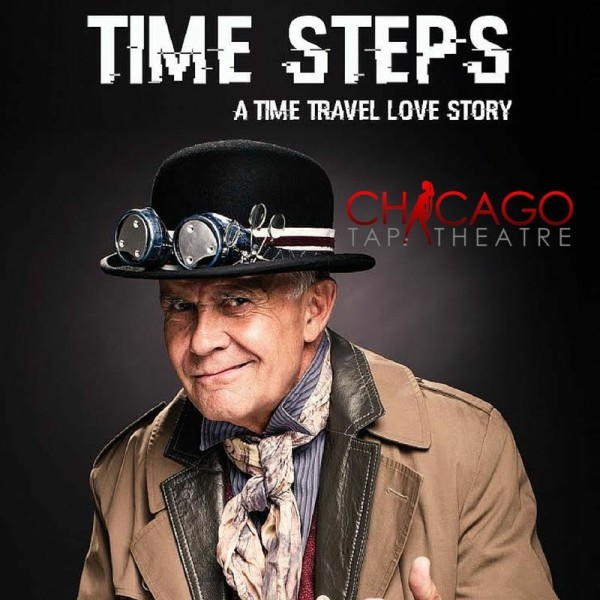 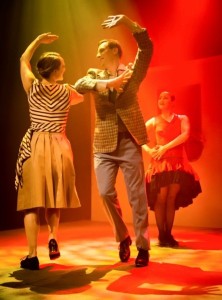 I have often said I simply adore a great tap-dance number. The recent, triumphant return of Broadway in Chicago’s tour, 42nd Street, proved that to be irresistibly true. With this said, it was with great anticipation and eagerness that I attended the new Chicago Tap Theatre’s production Time Steps. Billed as a blend of love, romance and tragedy, this showcase was regrettably a mixture of bright lights, basic tap, sci-fi aspirations, and little else. The individual fragments on display here never congealed to a compelling and cohesive presentation. Written and narrated by Marc Kelly Smith, frenetically directed by Billy Siegenfeld, scored by Kurt Schweitz, and choreographed by Mark Yonally, this unrequited love story collapsed under the strain of its own divergent parts. 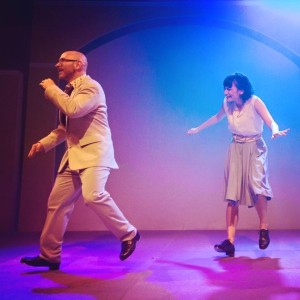 We initiated our 75 minute journey meeting Old-Time Salesman (Marc Kelly Smith) who offered up credits for purchase to take you anywhere and anytime. Drawn in the shadow of the dystopian Clockwork Orange sociopath Alex, the Salesman has the only dialog of the piece. “Ours is a low budget production” he jested. This is the “state of the arts under a Republican Congress.”  He quickly introduced us to the son of a millionaire, Argile Ribbet (Mark Yonally) on a pursuit to reconnect with his life long love, Carla (Jennifer Pfaff Yonally) afflicted with some mysterious illness. The main disconnect between these two performers and characters, and subsequently the story, was a serious lack of palpable onstage chemistry. While tap may not be the first dance style one may consider to use to express the grace of great passion and desire, these two each danced so closed off from one another, purposely miniscule on a medium sized stage, they were quickly lost within the ensemble which included Aimee Chase, Sarah Owens, Andi Bissen, Kelsey Schlabaugh, Jamie Salas, Aric Barrow and Jessica Williams. Carla continually running away from Argile, both metaphorically and physically, made me believe a more apt title for this production would have been, She’s Just Not That Into You, The Dance. Thank goodness for the secondary couple, Natalie (Kristen Uttich) and Sergio (Isaac Stauffer) who showed great flirtation, affection, passion, silliness and really superb, clean lines, with their lovely arm extensions and tap precision, consistently throughout their ancillary pieces. 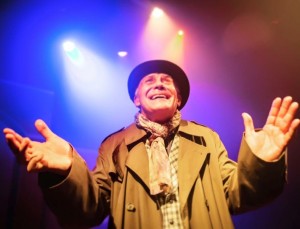 As the showcase continued, we collectively traveled through multiple time periods and various countries, best delineated by clever lighting techniques and background projection design by Dustin Derry and costume design from Emma Cullimore The most energetically choreographed and satisfying numbers were the party scene “Carnival! Carnival! The Seven Deadly Sins” and “The Casino Roulette.” From the free flowing disco inspired ensemble rave to the crescendo style tapping done to mimic the twirling ball of the roulette wheel, both were visually nice touches, but not enough to unify a haphazardly linked program, punctuated by singular components far better than the entirety. By the time we left “Barcelona” and Carla’s “Terminal Revelation Prognosis” began, Times Steps sincerely lost its steam. Without any audience connection to the two primary characters, an ending that was supposed to generate great sadness and empathy only marked relief we had reached the conclusion. 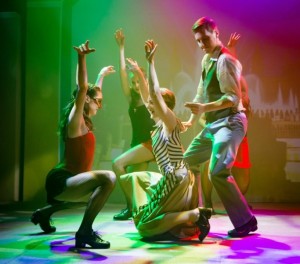 Overly ambitious in its desire to combine love, romance and tragedy with a time traveling story, Times Steps never clicked. The fleeting moments of cleverly scripted quips, eye popping lighting design, and a great supporting couple in Uttich and Stauffer, were betrayed by an underdeveloped and unrealized storyline. The few bonuses on display were not enough to make this production of Time Steps a must see. To put it bluntly, Time Steps tapped out. 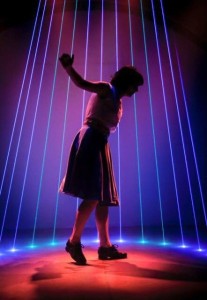