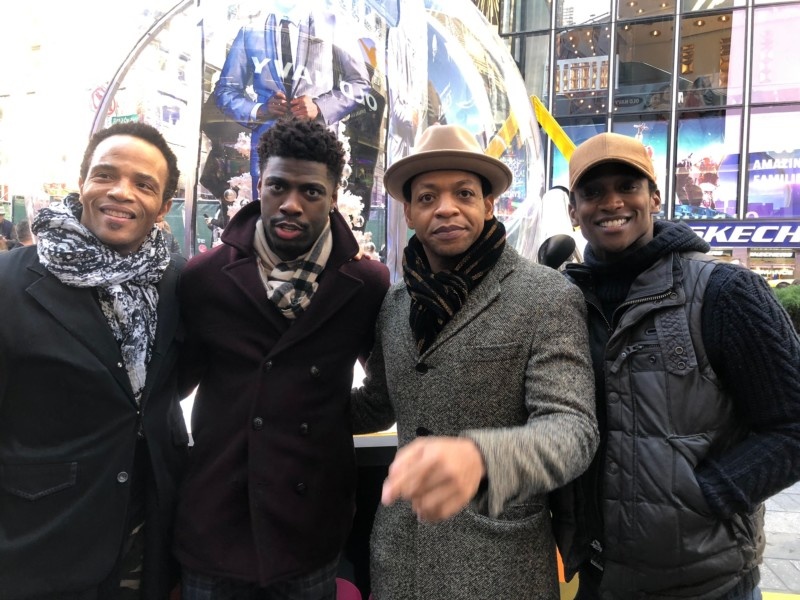 This holiday season the Times Square Alliance celebrates the creativity of Broadway designers and the power of live theater with these “Show Globes.”  They feature designs inspired by some of the most-loved musicals on Broadway and invite passersby to admire the imagination and talent that give life to every show. The four “Show Globes” are inspired by the designs of Ain’t Too Proud – The Life and Times of The Temptations, Dear Evan Hansen, The Lion King, and Wicked.

The Times Square Alliance partnered with Serino Coyne, a live entertainment advertising and marketing agency, on the curation and development of the 2019 “Show Globes” exhibition.

Details about the inspiration for each “Show Globe” as well as designer credits can be found here:

Inspired by the legendary group’s signature dance moves and cool style, the Ain’t Too Proud – The Life and Times of The Temptations “Show Globe” features the Classic Five Temptations all wrapped for the holidays.

Robert Brill – Scenic Designer, Ain’t Too Proud – The Life and Times of The Temptations

On-site for the unveil, cast members:

Dear Evan Hansen, the Tony Award-winning Best Musical, presents a “Show Globe” inspired by the show’s universal message of acceptance. The globe features a tableau set in the show’s orchard finale, complete with song titles from the Tony and Grammy-winning score.

On-site for the unveil, cast members and designer:

Inspired by The Lion King’s amazing sets, colorful costumes, and inventive puppetry, this Show Globe depicts the breathtaking “Circle of Life” scene, featuring the sun rising on Rafiki surrounded by the animals of the Pridelands. Rafiki is a wax figure provided courtesy of Madame Tussaud’s. Pride rock, the giraffe and bird kites are all mini-replicas of the actual elements from the show.

On-site for the unveil, cast member and designers:

On-site for the unveil, designer and cast members: