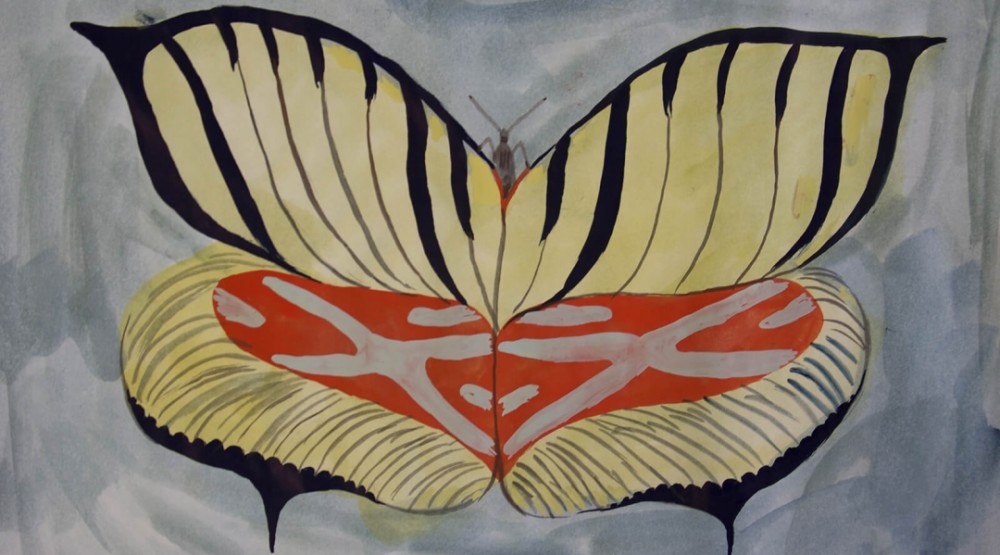 Allison Schulnik uses painting, ceramics, and, traditional animation to choreograph compositions that embody a spirit of the macabre and a tragicomic perspective on love, death, and farce.

Schulnik’s animated film Moth (2019), presented as the Midnight Moment for January 2020, ushers in the new year with symbols of birth, renewal and change. A hand-painted moth flutters in stop-motion, transforming from a fully-formed insect, to a nascent cocoon, to fantastical, sometimes ominous creatures. Schulnik began this work after a moth hit her studio window, painting frames for the film almost daily for 14 months as she was pregnant with and gave birth to her first child. The work reflects on the cycles of life and the bodily and emotional metamorphosis of motherhood.

Moth is presented in partnership with MASS MoCA on the occasion of its group exhibition Suffering From Realness, curated by Denise Markonish, which is on view through January 2020 and features the original, full-length version of the work.

Allison Schulnik (b. 1978 , San Diego, California) is a multimedia artist whose solo exhibitions include the Wadsworth Atheneum Museum of Art, Hartford, CT; Laguna Art Museum, Laguna Beach, CA; Oklahoma City Museum of Art, OK; Nerman Museum of Contemporary Art, Overland Park, KS; ZieherSmith, New York, NY; and Galeria Javier Lopez & Fer Frances, Madrid. She has been making animated films since she was 17. Her films have been included in internationally renowned festivals and museums including the Hammer Museum, Los Angeles, LACMA, Annecy International Animated Film Festival and Animafest Zagreb. She received “Best Experimental Animation” at the Ottawa International Animation Festival 2014 and Special Jury Prize at SXSW Film 2011. Her works were compared to “the comic-grotesque visionary James Ensor” by The New York Times. Her work is in the permanent collections of over a dozen institutions including LACMA and Museum des Beaux Arts, Montreal. She lives and works in Sky Valley, CA. allisonschulnik.com

MASS MoCA is one of the world’s liveliest centers for making and enjoying today’s most evocative art. With vast galleries and a stunning collection of indoor and outdoor performing arts venues, MASS MoCA is able to embrace all forms of art: music, sculpture, dance, film, painting, photography, theatre, and boundary-crossing works of art that defy easy classification. Through innovative collaborations, MASS MoCA helps artists and their supporters create and show important new work, bringing to our visitors bold visual and performing art in all stages of production, while also creating a stimulating center of creativity and commerce that brings life and economic vibrancy to its hometown. massmoca.org

Welcome To The Plastic Bag Store