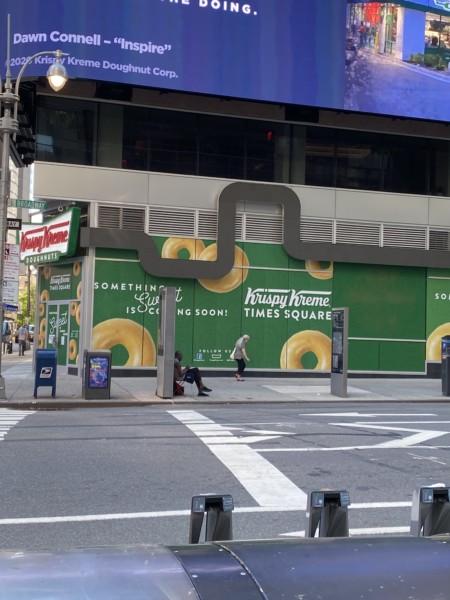 NBC is planning a primetime Broadway special in October. Casts from top Broadway shows will perform. Dates and time have not been announced, but like th Tony’s the shows are expected to pony up the cash to participate. Rehearsals, costume fittings due to weight and salary stand at the forefront.

New York Daily News has closed its newsroom, but has shifted to remote workplaces. The Publishing Company announced that it was closing its newsroom, along with four other newspapers across the nation.

Krispy Kreme’s new flagship store on 48th Street Krispy Kreme which was slated to open in May, plans to open September 15th. Look for a glaze waterfall and a production line capable of making close to 380 dozen doughnuts per hour. There will also be a 24-hour walk-up window, where customers can order boxes of doughnuts for takeout.

A special edition doughnut called a Big Apple Doughnut will be offered exclusively at this location. With its own special packaging the donut is inspired by the candy apples sold at Coney Island. Dipped in candied green apple red icing, a red delicious flavored Kreme filling, finished with a royal icing green leaf and a lightly salted pretzel stick for the stem.

Popeyes Louisiana Kitchen is celebrating their one-year anniversary of the fried chicken sandwich, early. The party started August 19, a year after Popeyes’ chicken sandwich took off on Twitter. Popeyes has sold 203 million chicken sandwiches to date.

As I walked through Times Square, it seemed as if I was in a “Twilight Zone” episode. It was 6pm on a Wednesday and I could count the people that were sharing this experience with me.

Next stop was restaurant row and my heart broke as Joe Allen’s was boarded up.

Yet as I walked down 46th street, it seemed like I turned the corner, left New York and entered a European street. Diners were laughing, drinking, conversing and supping.

On of the saddest parts of this pandemic is the overwhelmingly amounts of graffiti. This was one one block.

If you own a bike in New York City, make sure it is secure. Bike thefts are up according to Nextdoor and Rebbit. I see a lot of posts making it seem that unless you have a lock that is exceptional, your bike may not be there if you leave for more than a few minutes. The crime escalates if you have an electric bike. These $1300 – $1600 luxury items are on high demand.