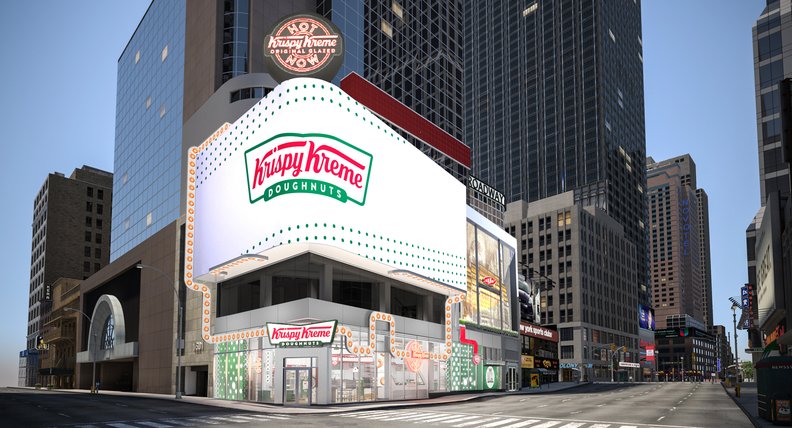 Krispy Kreme is coming back. The flagship store will be at 1601 Broadway, in May. Before that you’ll have to head to 994 Sixth Ave.

The protesting was in full force yesterday as 10 men and 20 women, of an anti-ICE coalition called Close the Camps NYC were arrested for disorderly conduct. Not bad considering there were nearly 500 demonstrators on the steps of the New York Public Library at 42nd Street and Fifth Avenue around 3 p.m. They then came to the offices at Thomson Reuters in Times Square. The group demanded the permanent closure of immigrant detention centers and were targeting Thomson Reuters, to help as they have lucrative contracts with the government to allegedly provide immigrant tracking data. They want the company to stop profiteering from concentration camps, immigrant raids, and immigrant detentions.

It’s not in Times Square, but the Lunar New Year is here as lions and dragons, as well as fan dancers, floats, giant puppets and community performers march through Chinatown on February 17 Starting at Mott & Canal streets and ending at Sara D. Roosevelt Park from 1-4:30 p.m.

At Bryant Park’s Winter Village ice bumper cars are still here. They have been extended through Sunday, Feb. 24, they’re $15 for 10 minutes of driving time. Available Mon-Wed from noon-5 p.m. Thurs-Sun from 2-8 p.m., wintervillage.org

A pop-ups called the Color Factory, extended their SoHo run through Feb. 28. This collaborative interactive exhibit debuted in San Francisco in August 2017. In August 2018, it opened in New York City in SoHo’s Hudson Square neighborhood. 20,000 square feet of participatory installations of colors we’ve collected around the city, some of our favorite artists, creatives, designers and makers are teaming up with us to tell their unique color stories and engage all of your senses in unexpected ways. $38, colorfactory.co