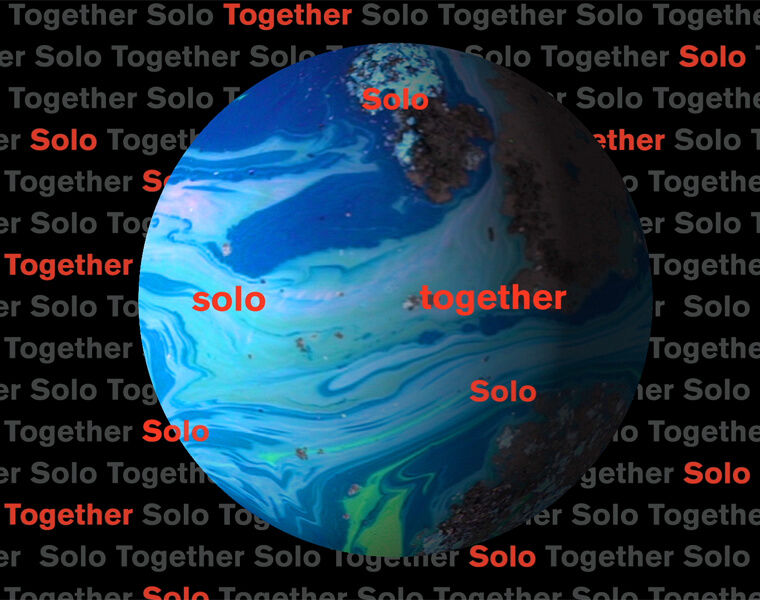 While images of an empty Times Square have become emblematic of how swiftly public life has shifted amidst this global crisis, the streets of New York City are not in fact empty. Hundreds of thousands of New Yorkers head to work each day to sustain our city, from healthcare professionals, city workers, sanitation staff, grocery store and bodega employees, delivery people, and more.

Radiating out from the screens of Times Square to the digital billboards above Lincoln Tunnel and nearly 1800 LinkNYC kiosks across all five boroughs, the initiative turns our city’s digital displays into platforms of public service and appreciation through the lens of established and emerging graphic designers and visual artists from around the world.

The initial phase, launched on April 17, 2020, featured work by over two dozen celebrated designers from around the world, all rallied by Poster House and PRINT Magazine. Phase two, began May 15, 2020, highlights the work of emerging and established visual artists and is led by For Freedoms, an artist collective dedicated to creative civic engagement, discourse, and direct action.

A rotating display of designs will be on view in Times Square on an ongoing basis at the 15, 30, and 45- minute marks throughout each day. The digital spaces for this citywide initiative have been generously donated by 20 Times Square and Maefield Development, American Eagle, Branded Cities, Morgan Stanley, Silvercast Lincoln Tunnel, and LinkNYC.

Ian Schrager’s The Times Square Edition which opened last year in partnership with Marriott International, will close August 13th due to financial issues caused by the pandemic.

The hotel’s developer Maefield Development came into default with Marriott International, according to the report.

The 452-room hotel was already in financial difficulty, as well as Schrager’s  other hotels including the Herzog and de Meuron-designed Public.

EMT Kyle Short, 26, and paramedic Meagan Herlilhy, 25, picked the balcony of the Hard Rock Cafe to say “I do” in front of the world.

The pair were chosen among thousands of couples to have their ceremony aired as part of a week-long segment for GMA showcasing love among the pandemic.

A week prior to this Amanda Stuart, a Texas nurse had to cancel her wedding due to the coronavirus pandemic, so she drop everything to fly to New York City to help on the front lines of the battle. Her bond with the other out-of-town nurses, became an wedding to remember.

The nurses worked 21 straight 12-hour shifts and by the end of their shifts were despondent. Throwing a wedding put a spark into their lives.

Stuart, who is originally from Arkansas, met her husband, Ronnie Dooley, in 2011 when she was his dad’s ICU nurse at St. Michael’s hospital in Texarkana.

Freedom for darknet market founder and “Silk Road” founder Ross Ulbricht is on a billboard all over Times Square. Ulbricht was found guilty in 2013 of seven charges including drug trafficking, money laundering, computer hacking, criminal enterprise, and aiding and abetting the distribution of narcotics over the internet, and sentenced to two life sentences with no parole. “

“Silk Road” was an online black market and the first modern darknet market, best known as a platform for selling illegal drugs, human trafficking, child exploitation and so much more.

Even though Ulbricht is serving his 7th year in prison, he has still been contributing to the cryptocurrency community and publishes his writings online. The billboard, is scheduled to remain in Times Square for several months.

Suzanna BowlingApril 22, 2022
Read More
Scroll for more
Tap
My View: Get Your Tickets Before It Sells Out….Best Seats Available Now
The Glorious Corner