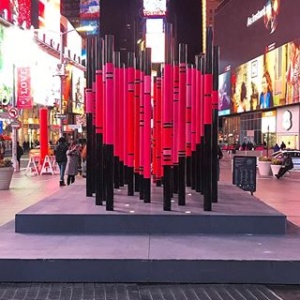 Valentine’s Day in Times Square saw four couples getting married, three getting engaged and countless others renewing their vows. The marriages took place in front of  We Were Strangers Once Too, which is on display until March 5. The sculpture is made of thirty-three metal rods that rise up on a platform in Duffy Square. Each is covered with red or pink bands and the name of a country. The numbers below each country indicate where the more than three million immigrants who live in the city came from. 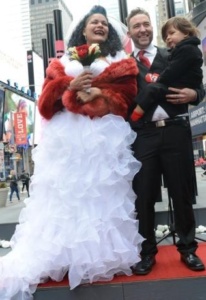 Stephanie Torres, 40, a Coney Island snake charmer and Tim Porter, 32, a welder who specializes in set design, married at 11 a.m. Torres-Porter who is Puerto Rican won a contest as a result of an essay that explained how her romance epitomized the melting pot nature of The Crossroads of the World. He husband is  of German and Irish descent. The couple already has a two soon to be three year-old son Gunner. Porter finally married Ms. Torres after her sister, Rebecca Tighe, 26, was struck by a tow truck and killed while crossing a street in Massapequa Park, L.I., the week before Thanksgiving. Torres stated before her wedding “That tragedy reminded me that I can’t wait forever.” 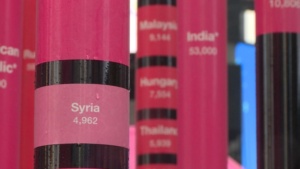 Hollis Kam, a human resource director for the Times Square Alliance, officiated. Mr. Kam became a Universal Life Church reverend in 2008. His vows  asked the forces of the universe to allow the pair to “live in perfect harmony,” “be eternally happy” and to “always be the best of friends.”

This year’s Valentine’s Day extravaganza was the fourth year of weddings and proposals, the sixth year of vow renewals and the ninth year of the heart sculpture, which will be on display until March 5. 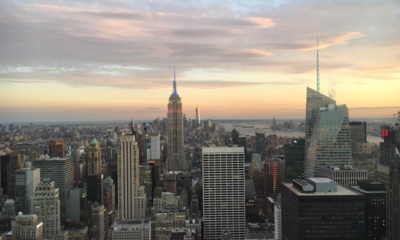