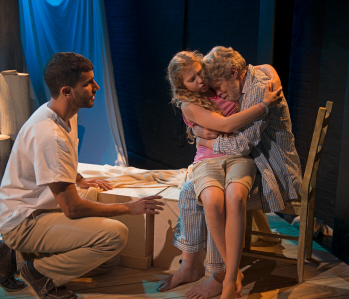 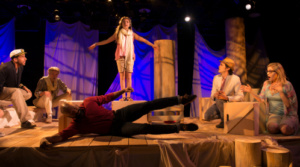 After 8 years, Pulitzer Prize and Tony nominated Tina Howe, has penned a new piece about climate change and Alzheimer’s called Singing Beach. Produced by Theater 167 at HERE, this absurdist play leaves the audience feeling as if the hurricane spoken of onstage is headed straight for them. 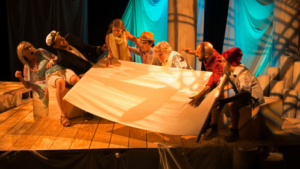 We follow a family in crisis at their beachfront home as a Category 4 hurricane threatens the coast. 10-year-old Piper (Elodie Lucinda Morss) is smarter than her years. When her 12-year-old obnoxious brother, Tyler (Jackson Demott Hill), tells her that her beloved grandfather, the poet Ashton Sleeper (Tuck Milligan), is being put out to pasture by her step-dad (John P. Keller), Piper is determined to fight back, even when her novelist mother, Merrie (Erin Beirnard), cannot find the guts. 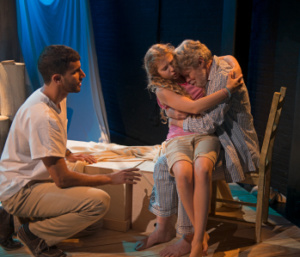 Remembering the stories of how her grandparents traveled on ocean liners, Piper whittles a little wooden boat, the S.S. Pegasus. In the surreal moments, she and her grandfather escape on the ship as her brother turns into a stowaway ice skater, her mother a beloved science teacher, and her grandfather’s caregiver (Naren Weiss) the Captain, while her favorite TV crime-show star (Devin E. Haqq) shows up just for fun. In the end, reality sets in or has it as the hurricane sweeps those who want to out to sea.

Mr. Milligan, Ms. Beirnard and Mr. Weiss are all standouts in their roles. Miss Morss is just too inexperienced to carry on a lead, and lacks emotional depth that makes us care for this child’s plight. Our hearts should break for this little girl’s separation from her beloved grandfather and they don’t.

Ari Laura Kreith’s direction is a little too frantic and doesn’t really build to a climax. She also has directed things that make no sense, such as the knife and not realizing that the dialogue states some puzzling things.

Everything about this script seems more like a shipwreck than a fantastical dream. Ms. Howe just never lets us know how high the stakes are, and they are high. We are at a crisis of losing our planet and ourselves and the stakes just don’t get much higher than that.

I am a huge fan of Ms. Howe’s Painting Churches, Coastal Disturbances and Pride’s Crossing, but Singing Beach just leaves me high and dry.

Theatre Has Lost a Great Playwright As Sam Shepard Passes Away
NY Summerfest: Caught Dreaming – A Descent into Madness