Tis The Season: As The Tabernacle Choir Gifts $100,000 Donation to The Actors Fund Via Brian Stokes Mitchell 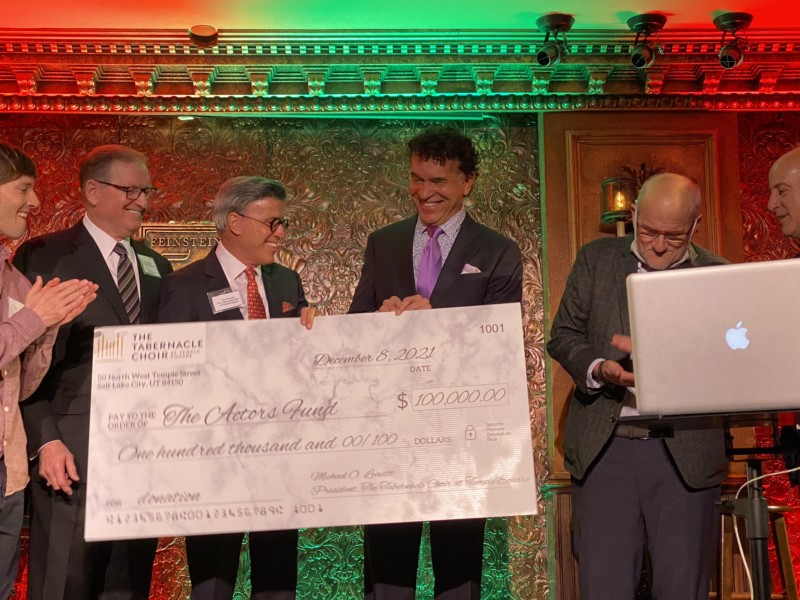 Tis The Season: As The Tabernacle Choir Gifts $100,000 Donation to The Actors Fund Via Brian Stokes Mitchell

Brian Stokes Mitchell, during a luncheon at Feinstein’s/54 Below sang John Bucchino’s “Grateful” to thank The Tabernacle Choir for their donation of a $100,000 to the Actors Fund. Gary Porter, second counselor in the Tabernacle Choir at Temple Square presidency and senior vice president of Deseret Management Corp was there to do the honors.

The choir’s donation will help many. Stokes stated “These spaces have been very, very rough this year and very, very lonely for people. So many people left and a lot of people have gone bankrupt. We’ve lost a lot of people that could not take it. Some died by suicide or from the coronavirus. Too many to mention.”

The Actors Fund provides aid ranging from counseling to paying utility bills, health insurance costs and more. It is offering $5,000 grants to encourage theater professionals to return to New York City. This year, the fund has provided $24 million to 17,000 people.

The donation said Porter, was a way to thank all the performers who have come to Salt Lake City to perform in the Tabernacle Choir’s annual Christmas concerts over the last 20 years.

In December 2020, the choir canceled its Christmas concert because of health guidelines and prohibited mass gatherings. PBS and BYUtv aired the 2019 concert as scheduled. But without a 2020 concert what would be broadcast on PBS.org this year? The solution was a 20th anniversary retrospective.

Mitchell is hosting the choir’s two-hour special “20 Years of Christmas with The Tabernacle Choir,” which premieres Monday at 6 p.m. MST on PBS, PBS.org and the PBS video app. BYUtv will broadcast the special beginning Dec. 16.

The special will include more than 60 songs, carols and stories from over 40 guest artists and narrators who have starred in the Christmas tradition since it began in 2000. (See the list of performers below.)

The two-hour special includes Broadway songs sung in past concerts by Alfie Boe, Angela Lansbury and Kelli O’Hara, as well as performances by other Broadway stars like Kristin Chenoweth and Audra McDonald.

Lansbury’s rendition of “Not While I’m Around” from Sweeney Todd, which won the 1979 Tony Award for Best Musical, is especially poignant because the music and lyrics were written by legendary composer and lyricist Stephen Sondheim, who died November 26.

“The fact there is a Sondheim song in the concert is a very lovely tribute,” said Ruthie Fierberg, an entertainment journalist who moderated Wednesday’s luncheon panel discussion between Mitchell and Choir musical director Mack Wilberg.

The choir’s $100,000 donation re above and beyond whatever is being raised this month for the Actors Fund in the Giving Machines operated by The Church of Jesus Christ of Latter-day Saints in New York’s Rockefeller Center, Porter said.

Mitchell’s video’s singing “The Impossible Dream” to New York’s essential workers from his apartment window during the pandemic went viral. “Artists are essential workers of another kind. We get to heal people’s hearts and their souls and their minds and their spirits and lift them when they’re down. Artists got me through this pandemic as well, and that’s why it was so important that we’re able to take care of artists.”

Wednesday’s donation came days after the Tabernacle Choir and Orchestra at Temple Square reached No. 1 on Billboard’s Classical Traditional chart for the 15th time with their newest album, “Christmas Best,” a compilation of music from the past 15 Christmas concerts.