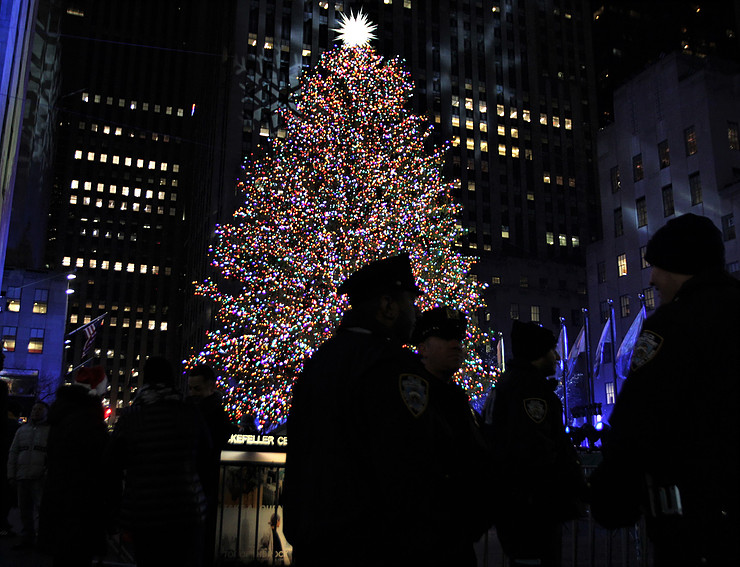 The Greatest Time of Year in The Greatest City in The World kicked into high gear last evening with the lighting of the 87th Annual Rockefeller Center Christmas, a star studded spectacular three hour event filled with performances, both live and pre-recorded, from the top names in entertainment from Broadway, TV, Movies, and Music culminating with NYC Mayor Bill DeBlasio and a cast of dignitaries flipping the symbolic switch to light the massive 77 foot spruce. This years event, like many I cover here for T2COnline, was, as I mentioned above, “Star Studded” which creates a dilemma for myself as the photographer covering this show – What celebrity photo do I lead with, do I start with the headliner, do post in chronological order, do I just lead with my best photo of the night? What if Ne-Yo gets upset that Lea Michele photo went first? Does Billy Porter see my coverage and think,”hmmmm he didn’t lead my photo, what? he lead with Idina Menzel?” Normally I just lead with my favorite photo of the evening. Last evening however my lead photo came after the show, after all the celebrities had moved indoors at 30 Rock to the after parties and the crowds were heading home or back to their hotels. Today’s lead photo features members of the NYPD standing watch as the crowds head home. Just wanted to say Thank You to all of the brave women & men of the NYPD for making large scale public events such as this possible, safe and secure for all to enjoy. If you see a member of the NYPD this holiday season feel free to walk up and Thank them for their service. God Bless The NYPD.

This year’s tree comes from the home of Carol Schultz in the village of Florida in Orange County, NY. The tree was cut down on November 7th and arrived in New York City on November 9th, where it was raised into place. A small army of workers spent the next few weeks placing more than 50,000 multi-colored, energy efficient LED lights, strung on five miles of wire to decorate the 12-ton, 77 foot-tall, 46-foot wide Norway Spruce. The tree is topped off with a 900 pound Swarovski Star made up of 70 spikes covered in 3 million crystals. Mrs. Schultz relayed how she had purchased the tree as tiny sapling in 1959 and placed it on the coffee table in her family home. The following spring she planted the tree in her yard where her children, grand children and great grand children enjoyed decorating it an playing in its branches as small children.

Lea Michele performed several numbers including new Christmas songs that the crowd loved. Lea has been very busy lately as she filmed a new Christmas movie, Same Time, Next Christmas, that airs for the first time tonight at 9:00 pm on ABC. She will be preforming a special Christmas concert for three nights only featuring music from the new Album of the same name, Christmas in New York. If I’m lucky I may get to cover that show for Broadway readers and maybe even get a short video interview with the amazingly beautiful and talented and busy, Lea Michele. Hey Christmas wishes right. To purchase tickets click here

One of the highlights of last evening for me were two adorable children that I had the chance to meet, and their wonderful parents. What is Christmas if not seen through the wide eyes of a child that believes in the true spirit of Christmas. For me that amazement has always been one of the best parts of the season. These two were so cute that I had to ask their parents if it would be ok to interview them. Too Cute. Brellen and Sophie are brother and sister ages 6 & 4. I didn’t get a contact from their folks but I gave them my info so I hope that they get to see this. This is certain to brighten your week. Enjoy.

So I try to not get start struck and remember the golden rule “Of them Not with them” But each year I seem to get lucky with one mega start or two. By that I mean they chat with you while working their way through the photo line, they are friendly. they say “Yes”, when you ask if you can get a quick selfie. Some stars say no thanks and I respect that. But I love when you meet the mega starts and they are down to earth and friendly. Thanks for the pic Billy Porter. I got the chance to tell Mr. Porter that all of the photographers love when he arrives at an event as we all can’t wait to see what style he has come up with for the night. Fashion Icon. Photo by Brian Hester

NYC Mayor Bill DeBlasio and members of the Tishman Speyer team look up and observe the beauty that is the Rockefeller Center Christmas shortly after they hit the symbolic switch to turn on the lights. As any true New Yorker knows, the switch they hit doesn’t actually light the tree That would require a union electrician, most likely one of my IBEW sisters or brother, I’m guessing Local 3. Safety first.

All in all a fantastic evening was had be all in attendance with an amazing show combined with the lighting of The World’s Most Famous Christmas Tree. The Best Season of The Year in The Greatest City in The World. Enjoy a few additional photos in the gallery below.

Suzanna BowlingJanuary 31, 2023
Read More
Scroll for more
Tap
Luba Mason Brings a Fearless Heart and a Life of Memories to Feinstein’s/ 54 Below
Oh What a Night Seth Rudetsky’s Broadway Series With Megan Hilty and Jessie Mueller