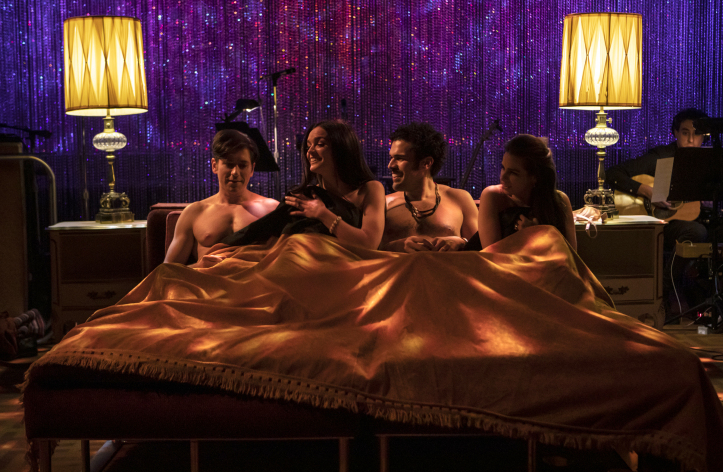 “Bob, what’s going on?” It feels like a soft rock smokey step back into a time when the sexual liberation was igniting a conversation that was heating up bedrooms and therapy offices across the land. Key parties and being free was the new frontier of liberation and self expression, and the 1969 film, “Bob & Carol & Ted & Alice” written by Paul Mazursky and Larry Tucker that starred Natalie Wood, Elliott Gould, Dyan Cannon and Robert Culp visually sent the country spinning with its scandalous movie poster of the four of them naked in one bed asking the viewer to “consider the possibilities“. So I guess some people did, many years later, by creating a smooth sounding musical version that borders on cute and charming, rather than transformationally scandalous or alarming. Not that the movie, in the end, was anything all that revolutionary as it ends in pretty much the same way The New Group‘s new musical, Bob & Carol & Ted & Alice, now playing through March 22 at The Pershing Square Signature Center, does, with a bit of an awkward shrug and a rose colored giggle suggesting ‘I thought we could do this, but I guess we can’t‘ idea.

With a ‘by the book’ book by Jonathan Marc Sherman (Things We Want; Clive), Bob & Carol & Ted & Alice drive out with the wind in their hair into the land of awakening. There is hope for a bit of personality armour dismantling, all backed by the gentle harmonious music and orchestrations by Duncan Sheik (Spring Awakening) with passively engaging lyrics by Sheik and Amanda Green (Female Troubles). The musical, staging by Kelly Devine (Broadway’s Diana; Come From Away), with music supervision, vocal arrangements and additional orchestrations by Jason Hart (ATC’s The Secret Life of Bees) and music coordination by Antoine Silverman, coasts forward as coolie as the opening drive-away scene of the very appropriately dressed fashionable pair, namely Bob, engagingly portrayed by Joél Pérez (TNG’s Sweet Charity), and Carol, compellingly played by the gorgeous Jennifer Damiano (Broadway’s Next to Normal). The period perfect shades are stylishly on, and the cigarettes blaze as they drive relaxingly out to some sort of retreat Institute. Bob is doing research for a film, but Carol wants to enliven their intimate world with self expression and enlightenment. The setup pulls us, particularly well due to the fashionable sexy leads, thanks to some fine work by costume designer Jeff Mahshie (Broadway’s Kiss Me, Kate), but the excitement comes when band leader, the incomparable Suzanne Vega (Alley Theater’s Lover, Beloved: An Evening With Carson McCullers) chimes in with her silky psychotherapeutic vibe, coaxing the two to find their inner loving self and expand their horizons.  She’s the lead therapist guru, guiding the journey to new altitudes and attitudes as if we haphazardly wandered into a smoky cabaret that stars Vega as our empathetic host. It’s in her voice “cruising into to outer space” where I found the interest to stayed tuned in, and to give myself over to the vibe she is selling.

As directed simply and a bit too casually by Scott Elliott (TNG’s The True), the group dynamics of the sexual revolution cut through the thin veneer and play out with each spark leading to a well tuned sweet song.  “We talk alot about Love, but don’t feel it too much” is the idea, but they sing most delicately about it all into corded old-school microphones as if it’s not all that complicated. Ted, charmingly portrayed by a fun and very game Michael Zegen (Amazon’s “The Marvelous Mrs. Maisel“), and Alice, well crafted by the sexy Ana Nogueira (EST’s Bump), finally get to come front and center after playing backup singers for a bit too long.

They deal out the cards onto the table and into the laps of their partners, hoping to surprise and challenge their senses. Grabbing hold of a few instruments with grace and a simple joy, the four friends come together for drinks and sexual reveals. The game for broadening one’s sensual horizons in on. The four look great and sing beautifully, playing with the risque and sizzling sauciness, without getting dirty in any way shape or form. I keep waiting for the weight and heaviness of their actions to set in, but the ride doesn’t swerve in that direction. The speed bumps are small but well played on a smartly crafted but somewhat basic set by Derek McLane (Broadway’s Moulin Rouge!), with straight forward lighting by Jeff Croiter (TNG’s Cyrano) and a smooth sound by Jessica Paz (Broadway’s Hadestown). The straight hetero road to that infamous Las Vegas hotel room is finely paced with expertise and a clear nostalgic vision, but the drive is somehow lacking, as the internal exploration is played more for sweet laughs and the gentle conflicts of a sitcom variety, with each clash easily being taken care of.

It’s fun enough though, with the music gentle and period appropriate soft fun. “What world needs now, is Love sweet Love“, and Vega’s delivery is as joyfully engaging as one could hope. We see the last scene coming, and we wonder which road this new musical will take. The movie rides that same pathway to a similar sort of climax. “Bob & Carol & Ted & Alice”, the film presented itself as daring, and maybe it was in the late 1960’s, but in the end the four don’t actually go through with the act, realizing that maybe they aren’t as liberated or daring as they thought or hoped to be.  The same could be said of this whole musical. It teases us with sex and sexiness, and gives us a giggle and some shy sweet awkward glances at one another, but they slide their clothes back on sheepishly, wandering out looking for Tony Bennett. The wilder Las Vegas world flashes its neon lights behind them leaving the foursome dismissing the enlightenment and sexual revolution easily and casually. Don’t get fooled by the poster, but also don’t dismiss the sweet smooth fun that exists inside Bob & Carol & Ted & Alice’s pleasurable and titillating attempt to be wild and liberated. It’s a breezy good ride coasting along the edge of a new attitude, and with Suzanne Vega on the radio singing her heart out gloriously, what’s not to like?