To Steve From Liz Callaway With Love a Masterclass of Memories To Steve From Liz Callaway With Love a Masterclass of Memories

Deciding to check out the Broadwayworld live stream from Feinstein’s/54 Below I scheduled the marvelous Liz Callaway. Ms Callaway made her Broadway debut in Stephen Sondheim’s Merrily We Roll. His music was the songbook of her life. This began her long-term professional relationship with Sondheim. Her newest cabaret To Steve With Love: Liz Callaway Celebrates Sondheim at Feinstein’s/54 Below, makes complete sense, because she was a part of his world and he hers. Her first exposure was at the age of nine seeing the original Broadway production of Company. Liz grew up, singing Sondheim and we in turn watched her. So it was appropriate that she started the night off with  reworked lyrics to Company.

Callaway has performed in a number of live concerts. She appeared with Sondheim on Inside the Actors Studio, played the role of Young Sally in the Lincoln Center concert production of Follies opposite Barbara Cook. Follies was recorded live and  filmed as a documentary. She also performed in “A Stephen Sondheim Evening”. Her regional and international credits include Dot in Sunday in the Park with George and the European premiere of Sondheim on Sondheim at London’s Royal Festival Hall, plus many other non Sondheim pieces. 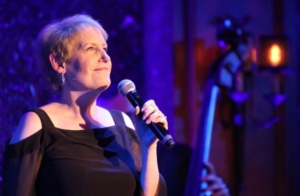 It was delightful having her sing her solos from Merrily We Roll “yesterday is done, see the pretty countryside” and “how did you get there from here, Mr. Shepard?” 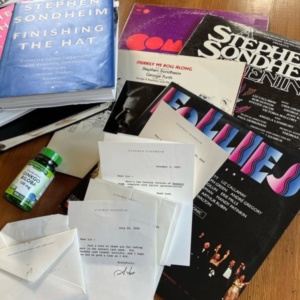 Liz’s stories made us feel closer to the legendary composer, who’s death feels like a piece of your history has been erased. These stories are heartfelt and personal. She even met her musical director Alex Rybeck, during the run of Merrily.

Liz voice is pure and her wonderful song material included; “I Remember” and “Take Me to the World,” from Evening Primrose, “What More Do I Need?” from Saturday Night, “What Do We Do? We Fly?” from Do I Hear a Waltz?, “In Buddy’s Eyes” and “Broadway Baby,” from Follies and “Loving You” from Passion. 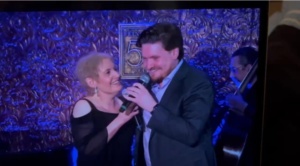 Seeing Ms. Callaway interpret “The Miller’s Son” from A Little Night Music was truly a delight. Then she sang “Move On,” a duet from Sunday in the Park with George with her son, Nick Callaway Foster. It was touching to here this done as mother to son.

My favorite Callaway song came next, Lauren Mayer’s demented version of “Another Hundred People” from Company. If you have never heard this, it is a must.

The next section was infused with warmth with “Send in the Clowns” from A Little Night Music, “Our Time” from Merrily and“With So Little to Be Sure Of” from Anyone Can Whistle ended the evening with perfectly controlled vocals that let her voice soar, caress and soothe a weary audience who needed to hear the lyric.

Liz’s director was husband Dan Foster, who offered an intimate and sincere night of reflection, and truth. 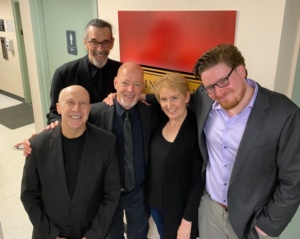 Supporting Liz and creating a magical night were Rybeck on piano, Ritt Henn on bass, and Ron Tierno on drums.

This was a magical night of remembrance and song.

Thank-you Broadwayworld.com for bringing such fabulous artists into our homes.

To Steve With Love: Liz Callaway Celebrates Sondheim at Feinstein’s/54 Below. Closed