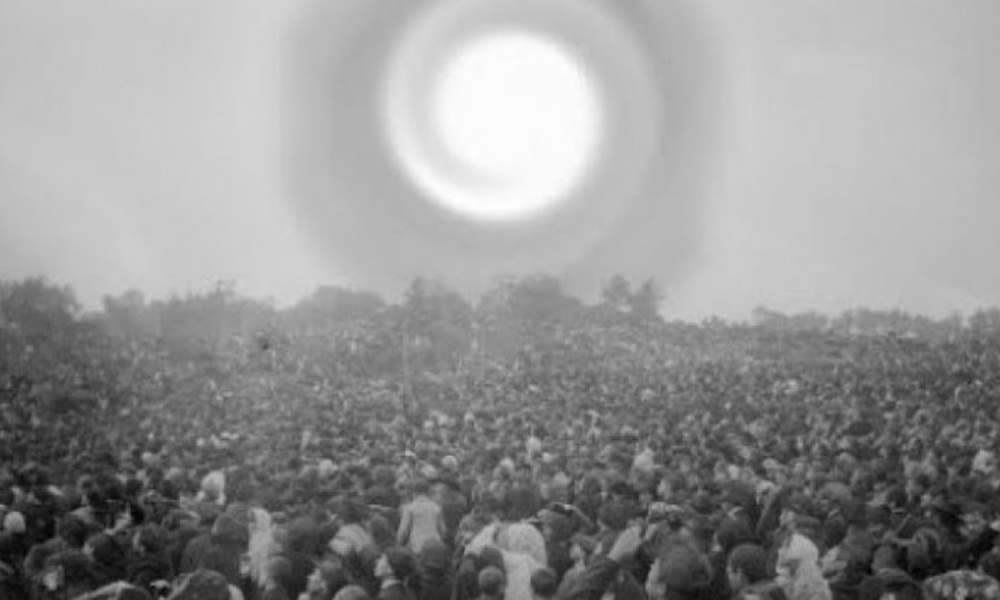 The Miracle of the Sun, also known as the Miracle of Fátima, was a series of events reported to have occurred miraculously on October 13 1917, attended by a large crowd who had gathered in Fátima, Portugal, in response to a prophecy made by three shepherd children, Lúcia Santos and Francisco and Jacinta Marto. The prophecy was that the Virgin Mary (referred to as Our Lady of Fátima), would appear and perform miracles on that date. Newspapers published testimony from witnesses who said that they had seen extraordinary solar activity, such as the Sun appearing to “dance” or zig-zag in the sky, careen towards the Earth, or emit multicolored light and radiant colors. According to these reports, the event lasted approximately ten minutes. Visions and prophecies were also given.

The local bishop opened a canonical investigation of the event in November 1917, to review witness accounts and assess whether the alleged private revelations from Mary were compatible with Catholic theology. Bishop José da Silva declared the miracle “worthy of belief.”

The Three Secrets of Fátima are a series of apocalyptic visions and prophecies. The three children claimed to have been visited by the Virgin Mary six times between May and October 1917.

According to Lucia, around noon on 13 July 1917, the Virgin Mary entrusted the children with three secrets. Two of the secrets were revealed in 1941 in a document written by Lúcia, at the request of José Alves Correia da Silva, Bishop of Leiria, to assist with the publication of a new edition of a book on Jacinta. When asked by the Bishop in 1943 to reveal the third secret, Lúcia struggled for a short period, being “not yet convinced that God had clearly authorized her to act”. However, in October 1943 the Bishop ordered her to put it in writing. Lúcia then wrote the secret down and sealed it in an envelope not to be opened until 1960, when “it will appear clearer”. The text of the third secret was officially released by Pope John Paul II in 2000, although some claim that it was not the entire secret revealed by Lúcia.

In 1952 Warner put out “The Miracle of Our Lady of Fatima” and it was well received.

The Shrine of Fátima is preparing to receive thousands of faithful for the International Anniversary Pilgrimage and is expecting the biggest turnout since the beginning of the Covid-19 pandemic. An international mass, with prayers for the sick are to be expected.

Maybe this year we should pray for this country, the decisions our people make and put God back into our lives.