As I walked out of the theatre, I heard the same statement repeated over and over: “I liked the play, but I haven’t a clue what it was about.” Even the director, Jack O’Brien (LCT, The Coast of Utopia) said that when he saw the London National Theatre production of Stoppard’s 2015 play, he said, “Although it was a good evening, I didn’t understand it.”

Having been a huge Tom Stoppard fan since Travesties, The Hard Problemasks where does consciousness lie. Is it through thought and emotion or are we like a computer? Now me, I can answer this question without even thinking twice… the soul. This, however, never gets brought up. In all honesty, the question is never answered, even though we spend what seems like two hours (90 minutes) trying to figure it out. 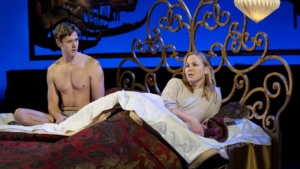 We follow Hilary (Adelaide Clemens), a psychology student wanting to win a slot at the prestigious Krohl Institute, a neuroscience research facility underwritten by hedge fund billionaire Jerry Krohl (Jon Tenney). She gets help from her colleague and casual sex partner, Spike (Chris O’Shea). After sex, he walks in on her praying for forgiveness. At the interview, she runs into her high school friend, Julia (Nina Grollman). Her lover, Ursula (Tara Summers), gives her a tip and she wins the slot to work with Leo (Robert Petkoff) instead of computer genius Amal (Eshan Bajpay). Instead, Mr. Krohl takes on Amal. 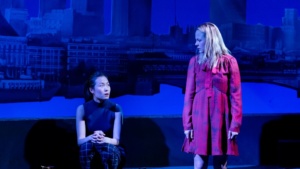 Leo’s department – which focuses on neuroscience – is failing, while the computer department that Spike now belongs to is being given more and more space and funding. Hillary is given an assistant, Bo (Karoline Xu), who dates Amal but is crushing on Hillary. Bo and Hillary finally make a break through and publish an article but it turns out Bo faked the research. 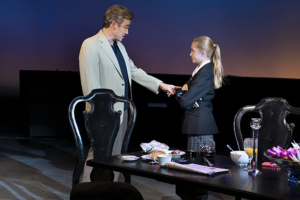 In the meantime, Krohl has a daughter, Cathy (Katie Beth Hall), who is adopted. Her parentage ads to the dilemma.

Stoppard tries to engage us intellectually, but this play is so emotionally distant. The situations feel contrived and more importantly, we figure them out in a nano-second. Sadly, the payoff never comes.

The performances are first-rate with Adelaide Clemens truly interesting to watch. Mr. Tenney plays sophisticated evil well, as does Mr. O’Shea. We wonder why Hilary would ever sleep with him. He must be really good in bed.

O’Brien’s direction adds nothing to the text. David Rockwell’s set, Catherine Zuber’s costumes – which easily come on and off – Japhy Weideman’s lights, and Bob James’s original piano music gives us the world in which we all are searching.

Maybe if The Hard Problem got spiritual, we would have understood its meaning.

Suzanna BowlingMay 17, 2022
Read More
Scroll for more
Tap
Free To The Public Conversations on Broadway: Darren Criss
Noura: A Play and a Woman Each in Search of an Identity