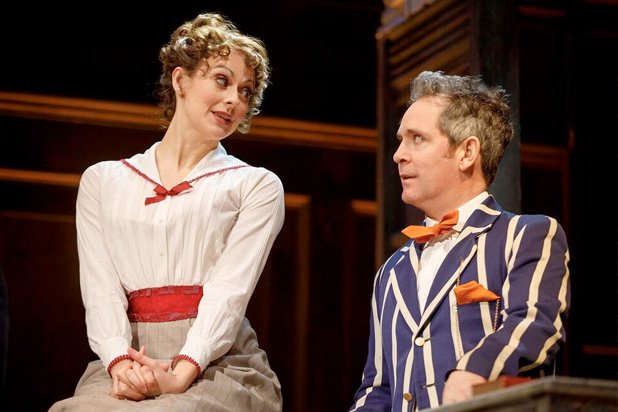 “It may be nonsense, but at least it is clever nonsense” 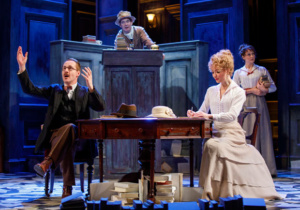 Tom Stoppard’s 1974 Tony Award-winning play Travesties is being given a spectacular revival at the Roundabout’s American Airlines Theatre. This rollercoaster ride is an energetic, well-acted, joyous mayhem of delight. For those who don’t know this show, Travesties takes on the characters of Oscar Wilde’s The Importance of Being Earnest and humorously drops layers of history around them. 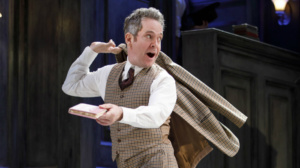 Here Henry Carr (Tom Hollander), a character based on the British consular officer who in 1917 Zurich sued James Joyce (Peter McDonald), the Irish author, over a pair of trousers and tickets for an amateur production of “Earnest”, recalls his life. Joyce was in Zurich writing “Ulysses,” then titled “Elasticated Bloomers.” Dadaist poet Tristan Tzara (Seth Numrich) and Vladimir Lenin (Dan Butler) in his younger days are also in residence. Rounding out the cast is the librarian and Carr’s wife who also plays Cecily (Sara Topham) and Joyce’s scribe who also plays Gwendolen (Scarlett Strallen). 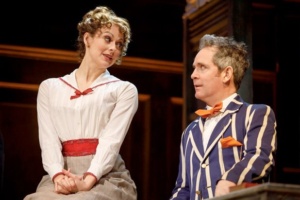 I would not be shocked if Hollander takes home the Tony for this role. His portrayal as both the older and younger versions of himself is a lesson in style and wit.

Patrick Marber’s direction is sublime and I could see him directing all those screwball comedies of the 30’s.

Stoppard twists actors’ tongues, but the arguments between Carr, Joyce, Tzara, and Lenin about the purpose of art is still relevant today.

Suzanna BowlingAugust 9, 2022
Read More
Scroll for more
Tap
An Uninspiring Saint Joan
Harry Potter and the Cursed Child is Magic on Broadway and Perfectly Made for Boys and Their Fathers