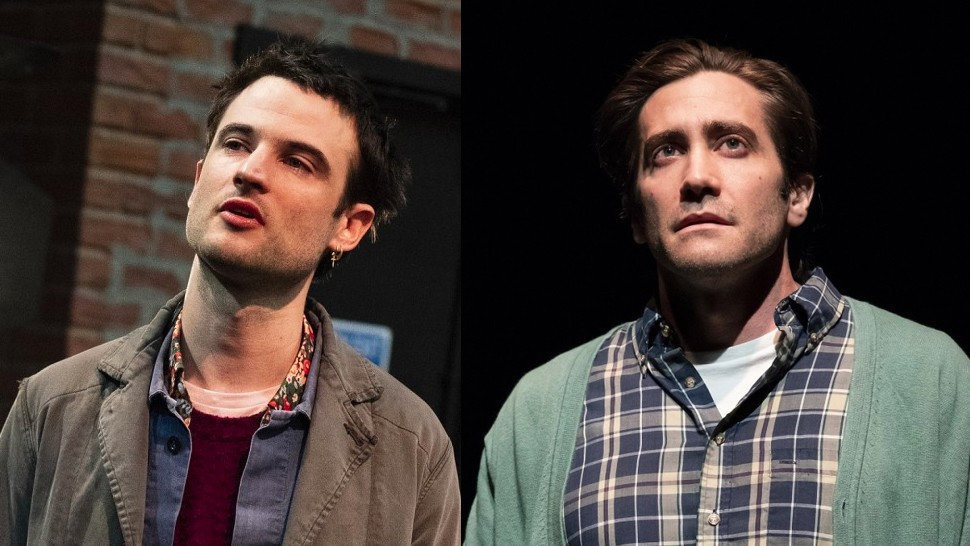 The balance of life and death and how life can turn on a dime is on double bill at The Public Theatre. Simon Stephens Sea Wall starring Tom Sturridge begins the evening and Nick Payne’s A Life starring Jake Gyllenhaal finishes up this contemplative evening.

You enter as you see two levels of solid brick walls, a piano, and a backstage dresser designed by Laura Jelinek. There are three film lights where the actors control Peter Kaczorowski’s lighting design, which is minimalistic. Carrie Cracknell has directed these pieces so that they are real-life conversations. They are two distinctly different people trying to cope with life’s curve balls.

First up is Alex (Sturridge), a gentle Brit that people like. He is a photographer, but there is something not quite right here. As we hear his story, we start to understand the reason for the displacement. Alex is married to a woman, Helen, whom he loves beyond reason, and he is best friends with his father-in-law who dives and owns a house by the French seaside. Alex loves the circumstances and everything about his daughter.

When his father-in-law takes him diving and shows him the sea wall and how it drops without warning, it is a metaphor for how life can strike a devastating blow and all you know can be ripped away.

When his daughter is 8, everything Alex knows is torn from him like a movie. Before this, he keeps saying I know you can see this big hole in me.

Stephens play, in a strange sense, is like opening a series of Pandora’s boxes that never really tells us what is inside. We are meant to guess, examine, and question. Alex keeps telling us “the worse thing he ever did”, but never tells us. Maybe because the worse thing is to say nothing.

Sturridge’s performance is aching and we long to put our arms around him and tell him it will be ok, even though it may never be. Like Alex, we do not cry, we ponder and are left with wounds of our own devastation.

In Payne’s A Life, Abe (Gyllenhaal) has a little bit more comedy, but in a sense, it is more distancing. Abe’s girlfriend is pregnant and about to give birth, and at the same time, Abe’s father is dying. When his father first starts showing symptoms, Abe is nonchalant. As the father’s disease progresses, Abe becomes more emotionally involved. It is the same thing with his girlfriend’s pregnancy: blasé until a crisis and even then does he ever really care?

Abe states that he is not ready to be a father, he is a son. It isn’t until he feeds his newborn lavender oil that he starts to say her name over and over instead of calling the doctor.

There are some great lines, with the best being his reaction to seeing a sonogram after he thinks his girlfriend has miscarried. He compares his daughter to “an X-ray of a pile of tiny kitten bones.”

This material works because Gyllenhaal is likable by way of his persona and his disconnection to moments as they are happening seem more sad than self-absorbed. I don’t necessarily think this would be the case in another actors’ hands. Abe has some pretty blatant flaws, but then again, don’t we all.

Both actors are flawless and are a joy to watch onstage, no matter what the material is. Sturridge and Gyllenhaal understand how to be present in the moment and take us on a subtle journey through the human psyche.

I loved the direction of Cracknell to bring back Alex as Abe is playing “Imagine”. Yes, Imagine a world where death didn’t devastate us in ways that can break our heart.