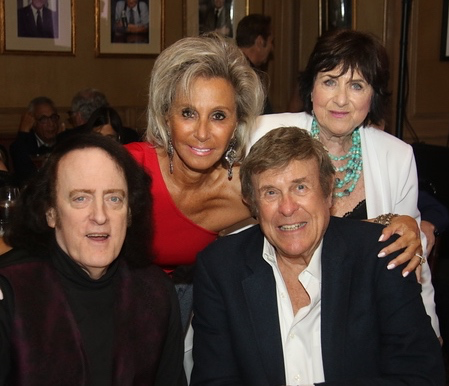 The Friars Club has been a private club catering to the entertainment industry since 1904. Known for famous roast and a club house for great singers and comedians, Rock N Roll has finally entered the the club with a sold out evening staring Tommy James ( Tommy James and the Shondells) and Rock and Roll Hall of Fame guitarist Gene Cornish of The Rascals.

Joining in the fun was Mike Greenblatt talking about his new book “Woodstock”. Introducing the Rockers was everyone’s cousin; Cousin Brucie (Bruce Morrow) from Sirius Radio. As soon as he entered the Club he was mobbed by adoring members and. some of the guest had pictures of themselves with Cousin Brucie from years ago and were anxious to share it with him.

Tommy and Gene  playing guitars had the  room singing along  to “Good Lovin”. The audience shouted out for request. Tommy accommodated the request with his hits; “My Baby Does the Hanky Panky”,”Crimson and Clover”.

Mike Greenblatt, who was at Woodstock as a young man, told funny stories of what it was like to be there that famous week-end.After the show Tommy(Me The Mob and the Music), Gene (Good Lovin) and Mike(Woodstock) greeted and signed their books.