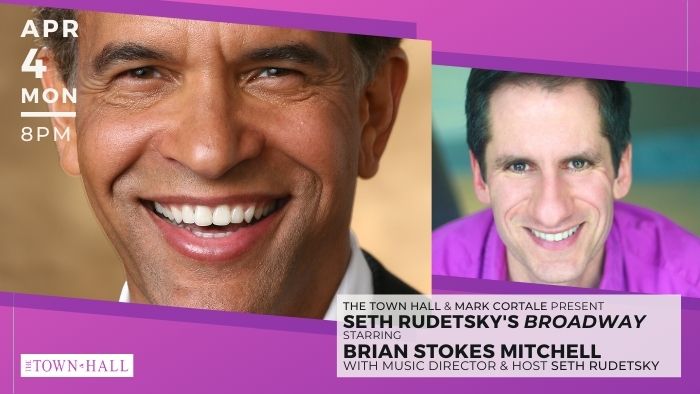 Suzanna Bowling
The Town Hall & Mark Cortale continue with the latest installment of the internationally acclaimed concert series Seth Rudetsky’s Broadway, hosted and music directed by Sirius/XM Radio star Seth Rudetsky at The Town Hall (123 W. 43rd Street).
On Monday, April 4 at 8pm, Seth welcomes Broadway star Brian Stokes Mitchell.
Dubbed “the last leading man” by The New York Times, two-time Tony Award-winner Brian Stokes Mitchell continues to enjoy a 40-year career that spans Broadway, television, film, and concert appearances. He received Tony, Drama Desk, and Outer Critics Circle awards for his star turn in Kiss Me, Kate. Stokes also has Tony-nominated performances in Man of La Mancha, August Wilson’s King Hedley II, and Ragtime, and he was recently inducted into the Theatre Hall of Fame. Other notable Broadway shows include Kiss of the Spider Woman, Jelly’s Last Jam, and Women on the Verge of a Nervous Breakdown. In 2016, Stokes made a long-awaited return to Broadway in Shuffle Along and received his most recent Tony Award that year for his work as Chairman of the Board of the Actor’s Fund. An extremely versatile singer, he has performed nationally at venues spanning jazz, opera, pops, country, and musical theater worlds including two performances at the White House. Stokes has appeared on more than 20 albums and his musical creativity as a vocalist has been extended to include producer, arranger, and orchestrator on all 3 of his solo albums, including his new release, Plays With Music.
The format of each concert is a seamless mix of intimate behind-the-scenes stories prompted by Rudetsky’s funny, insightful and revealing questions – and the music from the star’s stellar Broadway career.
Seth Rudesky is the afternoon host on Sirius/XM Satellite Radio’s On Broadway as well as the host of Seth Speaks on Sirius/XM Stars. As an author, he penned My Awesome/Awful Popularity Plan and the sequel The Rise And Fall Of A Theater Geek (Random House) as well as three volumes of Seth’s Broadway Diary featuring inside scoops and hilarious stories from all of the stars he’s worked with. He co-wrote and co-starred in Disaster! (NY TIMES “critics pick”) which also premiered to rave reviews in London. In June 2016, he and his husband, James Wesley, co-produced a recording of “What The World Needs Now” with stars like Idina Menzel, Lin-Manuel Miranda, Carole King, Audra McDonald which went to number one on iTunes and raised more than $100,000 for the Orlando shooting victims (and is still raising money. Buy it!). Seth and James have a foundation called Your Kids Our Kids that presented Concert For America; a series around the country featuring stars like Barry Manilow, Keala Settle, Stephanie Mills, Vanessa Williams, Billy Porter, Randy Rainbow and Audra McDonald that raised money for 5 non-profits that have been working relentlessly since the 2016 presidential election. They also present Voices for The Voiceless, a yearly star-studded concert for You Gotta Believe which helps older foster children find families, even if they’ve aged out of the system. SiriusXM/Pandora also carries Seth’s first podcast series: Seth Rudetsky’s Back To School where he interviews stars about the ups and (hilarious) downs of their high school years. The first two seasons include Tina Fey, Bowen Yang, Allison Janney, Vanessa Willams and many more. When Broadway shut down, Seth and James started hosting / producing Stars In The House (StarsInTheHouse.com) …a twice-daily livestream that’s featured tons of Broadway stars as well as TV reunions like The West Wing, Scandal, Frasier and E.R. and has raised more than $1,000,000 for The Actors Fund. They also joined Marlo Thomas and co-produced new versions of “Free To Be You And Me” with Sara Bareilles and “Sisters And Brothers” with the Broadway Inspirational Voices with the profits going to NAACP Legal Defense Fund. You can find out more about Seth, and watch his signature “deconstructions” at SethRudetsky.com. If you want to hang out with Seth and James and a bunch of Broadway stars performing up a storm, come on one of their cruises! In April 2022 they journey from Barcelona to Venice, Italy, in June 2022 roundtrip from Southampton, England to Norway, and in October 2022 Transatlantic from New York to Southampton. More info atSethsBroadwayVacations.com.
Tickets for Seth Rudetsky’s Broadway with Tony® Award Winner Brian Stokes Mitchell are $52-$97. For tickets and information, please visit www.thetownhall.org or call 800-982-2787.
This series is raising funds for Sandy Hook Promise. For more info visit: www.sandyhookpromise.org
Related ItemsBrian Stokes MitchellBroadwayMark CortaleNewSeth RudeskySeth Rudetsky's BroadwayThe Town HallTony Award Winner
Broadway

Suzanna BowlingNovember 29, 2022
Read More
Scroll for more
Tap
First Look With The Cast of POTUS First Day of Rehearsals
An Evening with Barry Manilow and Bruce Sussman and Their New Musical Harmony