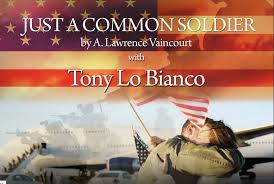 Now, more than ever, we must remember those who did and gave so much before. I speak to you from my heart. Just A Common Soldier, also known as A Soldier Died Today, is one of the most popular poems on the Internet. Written and published in 1987 by Canadian veteran and columnist A. Lawrence Vaincourt, it now appears in numerous anthologies, on thousands of websites and on July 4, 2008 it was carved into a marble monument at West Point, New York. This year marks the poem’s 25th anniversary. Please enjoy this tribute to the Soldiers, Sailors, Marines, and Airmen who have given so much for our country.