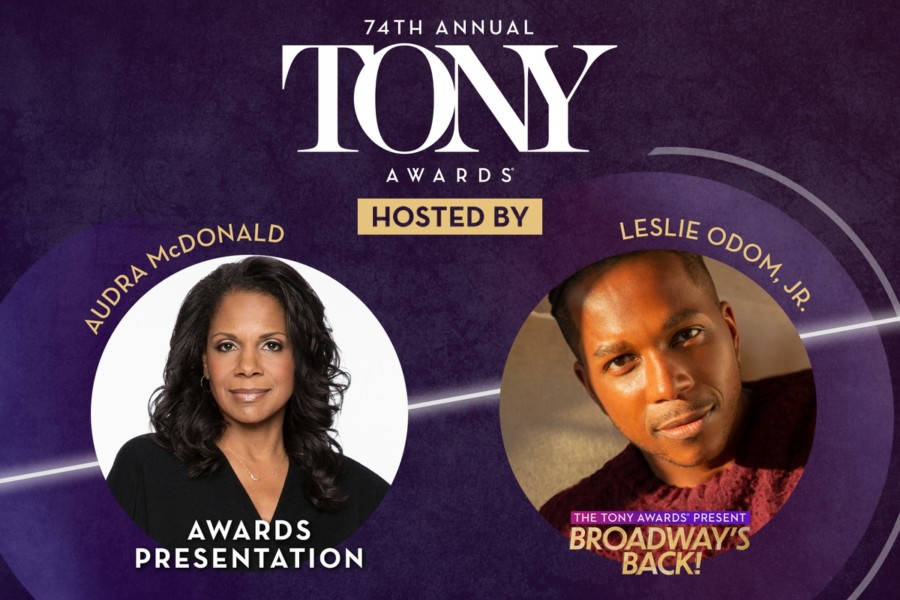 CBS and The Tony Awards announced today hosts for The Tony Awards® Present: Broadway’s Back!, live from the Winter Garden Theatre in New York City, Sunday, Sept. 26 on the CBS Television Network and available to stream live and on demand on the CBS app and Paramount+. The special will celebrate the return to live theatre and commemorate the 74th Annual Tony Awards® for the 2019-2020 season in a four-hour event across multiple platforms.

Tony and Grammy® award-winning, and two-time Academy Award nominated singer and actor Leslie Odom, Jr. will host THE TONY AWARDS® PRESENT: BROADWAY’S BACK! from 9:00-11:00 PM, ET/PT. The special will bring the excitement of Broadway to viewers through a live concert event featuring superstar Broadway entertainers and Tony Award winners re-uniting on stage to perform beloved classics and celebrate the joy and magic of live theatre. The re-opening of Broadway will be further celebrated with special performances from the three Tony-nominated Best Musical contenders, followed by the live presentation of three Tony Awards, including Best Play, Best Revival of a Play and Best Musical.

Earlier in the evening will be the live presentation of the American Theatre Wing’s 74th Annual Tony Awards® live at 7:00 PM, ET/4:00 PM, PT, streaming exclusively on Paramount+. Hosted by Tony, Grammy and Emmy Award-winning actor and singer Audra McDonald, the presentation will honor the outstanding shows, performances and artistry of the 2019-2020 Broadway season, which was brought to a halt by the COVID-19 pandemic.

“Broadway is a part of my DNA and I’m so thrilled to see it open back up again,” said Leslie Odom, Jr.  “There are so many talented artists going back to work and doing what they love for audiences who have missed these tremendous performances.  I’m very happy to host The Tony Awards Present: Broadway’s Back!”

“Leslie and Audra are two extraordinary talents, who have captivated audiences from the stage to the screen,” said Heather Hitchens, President and CEO of the American Theatre Wing and Charlotte St. Martin, President of The Broadway League.   “They are both beloved members of our Broadway community, and we know that fans will look to them for inspiration, comfort and pure joy, as we celebrate the 74th Annual Tony Awards, and the return of Broadway.”

“I’m elated that the Tony Awards are back! I am so glad that we’ve found a way to gather safely to honor and recognize all the incredible work that was done in the 2019-20 season,” said Audra McDonald.  “While we look back, my greatest hope is that this event marks the beginning of a new era for Broadway—one with renewed commitment to inclusivity and belonging as well as appreciation for the sacred experience of live theater.”

Leslie Odom, Jr.is a multifaceted, award-winning vocalist, songwriter, author and actor. With a career that spans all performance genres, he has received recognition with Tony and Grammy Awards as well as Emmy and, most recently, two Academy Award nominations for his excellence and achievements in Broadway, television, film, and music. Odom, an alumnus of Carnegie Mellon University, most recently starred in the critically acclaimed Amazon film adaptation of “One Night in Miami…,” in which he performed the songs of legendary singer Sam Cooke. His portrayal of the soul icon and musical performance of the original song “Speak Now” was met with widespread praise and critical acclaim, earning him multiple award nominations. Currently, he can be heard voicing the character of ‘Owen Tillerman’ in Season 2 of the Apple TV+ animated musical-comedy series “Central Park” and will next star in David Chase’s “Sopranos” prequel “Many Saints of Newark” that is set to be released in theatres on October 1st.

Audra McDonald is unparalleled in the breadth and versatility of her artistry as both a singer and an actor. The winner of a record-breaking six Tony Awards, two Grammy Awards and an Emmy, in 2015 she received a National Medal of Arts from President Barack Obama and was named one of Time magazine’s 100 most influential people. She won Tonys for her performances in “Carousel,” “Master Class,” “Ragtime,” “A Raisin in the Sun,” The Gershwins’ “Porgy and Bess” and “Lady Day at Emerson’s Bar & Grill,” which also served as the vehicle for her Olivier-nominated 2017 West End debut. On television, McDonald won an Emmy as the official host of PBS’s “Live From Lincoln Center;” she can currently be seen as Liz Lawrence in “The Good Fight” on Paramount+; and she stars in Spectrum’s pandemic-themed drama, “The Bite.” Her film credits include Disney’s live-action “Beauty and the Beast” and MGM’s 2021 Aretha Franklin biopic, “Respect.” A Juilliard-trained soprano, McDonald maintains a major career as a Grammy-winning recording and concert artist. Her latest solo album, Sing Happy, was recorded live with the New York Philharmonic for Decca Gold. A founding member of Black Theatre United, board member of Covenant House International, and prominent advocate for LGBTQAI+ rights, her favorite roles are those performed offstage, as an activist, wife to actor Will Swenson, and mother.

A limited number of tickets to attend The 74th Annual Tony Awards, on Sunday, September 26th at The Winter Garden Theatre will be available on Monday, September 13 at 3pm ET.  For more information please visit: tonyawards.com/tickets.