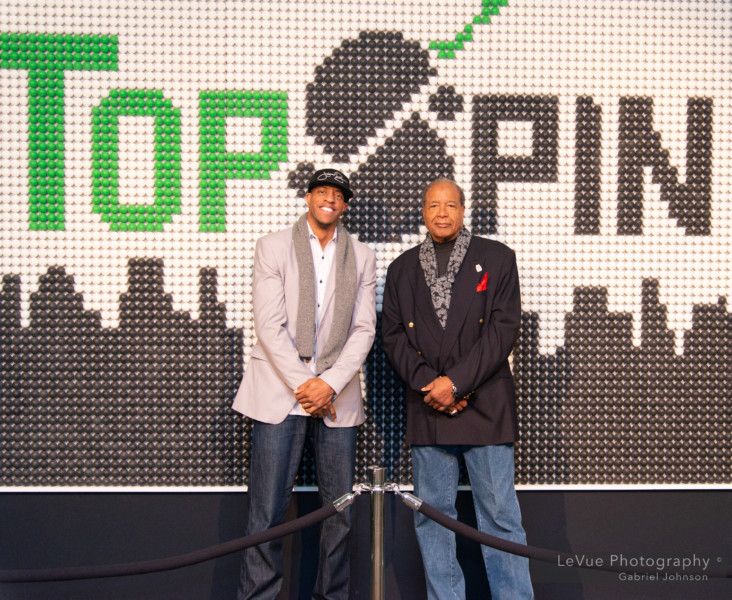 “The long-term goal for TopSpin is to give every child access to a well-rounded quality education,” said Peter Farnsworth, Founder of TopSpin Charity.  “We use the TopSpin event platform to raise funds and awareness in the sports and entertainment industry and deliver against this goal.”

Metropolitan Pavilion in Manhattan was the place to be seen with on hand glorious food samples, delicious sips and non-stop gaming fun. More than 20 of New York’s top restaurants offered unrivaled catering. The event also featured drinks by Coca-Cola and a dynamic cocktail program led by Hornitos, Maker’s Mark and other Beam Suntory spirits as well as Sipsmith.

Since 2009, TopSpin has raised more than $4 million for 25 educational nonprofits while also developing dynamic programmatic initiatives, such as the TopSpin Hoops Academy and a week-long camp program with Harlem Lacrosse.

TopSpin, a national philanthropic group, dedicated to empowering America’s youth through education, brought together more than 1,100 members of the sports, media and entertainment industries, including top sports executives and athletes from New York-based professional teams.

This year’s event featured elevated stadium courts for the Celebrity Tournament and the Professional Division. In addition several retired professional basketball players as well as numerous professional teams are expected to play in the celebrity tournament. Winners of the various tournaments received great gifts like a JBL Boombox.

TopSpin donated all proceeds secured in 2019 to four charities and to supporting TopSpin’s own programs aimed at increasing the educational opportunities for underserved youth:

·       A Better Chance – FM: A Better Chance recruits academically talented students of color from disadvantaged school districts and places them in an outstanding public school in Fayetteville-Manlius.

TopSpin Charity Host Committee is made up of leading industry executives, including: Mark Tatum of the NBA, Emilio Collins of Excel Sports, Will Funk and Jon Diament of Turner Sports, Charley Horsey and Bryan Duffy of MKTG, Deb Curtis of American Express, Jim Donofrio of NBC Sports, Lloyd Frischer and Jon Levine of CAA, JoAnn Neale of MLS, Frank Nakano of JPMorgan Chase, Ralph Santana of Harman, Ron Skotarczak of MSG, Charlie Turano of Heritage Works, Thayer Lavielle of Wasserman, Dan Mannix of CSM LeadDog, and Tandy O’Donoghue. TopSpin Charity is proud to be affiliated with numerous corporate supporters from across the sports and entertainment industry, including MKTG who has been producing the TopSpin event for the last seven years.