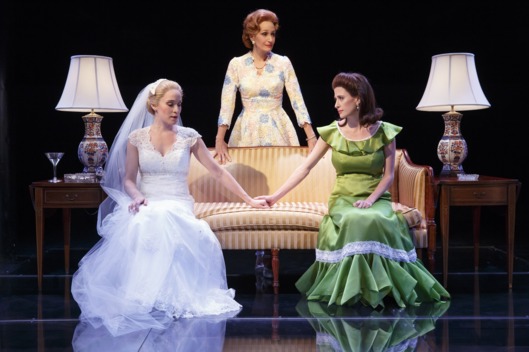 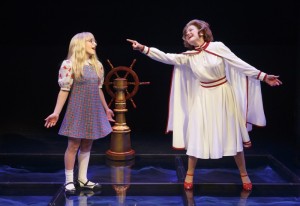 Michael John LaChiusa First Daughter Suite, at the Public Theater is not exactly what I’d call a musical. It is more like four mini opera’s tied together. It is esoteric, ambitious, uneven, emotionally moving especially the last two, phenomenally well sung and yet I don’t love it and I wish I did. Part of the reason is there is not one song that you can take out of context and sing. Some of the music sounds like Hello Again, Into The Woods and Floyd Collins. There are moments that it sweeps you away and then doesn’t deliver fully, so I was left feeling bereft. This piece is brave but I wanted so much more. I am a huge fan of Hello Again, Giant, See What You Want To See and Queen of the Mist. Sadly I had not seen or heard the first piece First Lady Suite.

In the first vignette Pat Nixon (Barbara Walsh) is dealing with Julie (Caissie Levy), who is annoyed at Tricia (Betsy Morgan) on her wedding that is threatening to be rained out. Tricia wants the day to be about her. Julie knows something is wrong with her father and Pat is speaking to her dead Quaker mother-in-law, Hannah Nixon (Theresa McCarthy).

The most out there piece is a 12-year-old Amy Carter (Carly Tamer) dreaming of braving the high seas on an Iran-bound presidential yacht (to rescue the hostage) in with her mother, Rosalynn (Rachel Bay Jones), and the former first lady Betty Ford (Alison Fraser) and her daughter, Susan (Ms. Morgan). 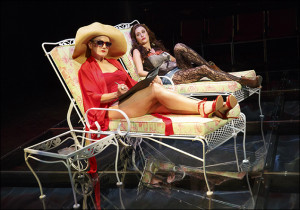 My favorite vignette was where Patti Davis (Ms. Levy) visits her mother, Nancy Reagan (Ms. Fraser), poolside at the home of the socialite Betsy Bloomingdale. Mrs. Reagan and her devoted Paraguayan maid, Anita Castelo (Isabel Santiago), stop her from speaking, but until they do watch out for this biting wonderful piece.

This cast is exquisite. Cassie Levy has made a fan out of me with this performance. She shows a range that pops and sings classical with the rest of them. Rachael Bay Jones proves not only can she sing, but boy can she act. Theresa McCarthy shimmers in her clear and pure soprano. Alison Fraser shows her comic side and wow can she kick. Mary Testa broke my heart with her performance. Carly Tamer has a major career ahead of her and I look forward to seeing where it goes. Betsy Wolf shines in dual roles and Ms. Walsh and Ms. Santigo make the most of their roles.

Kirsten Sanderson directs this not to easy piece with heart and lets us see the human inside the people who have shaped our world.

I thought this show could shake up the Tony race, but as much as I adore Michael John’s musical mind, this time I needed more greatness in me. 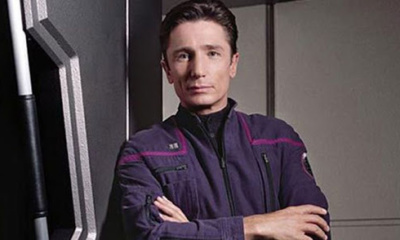 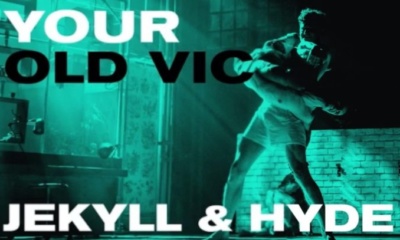 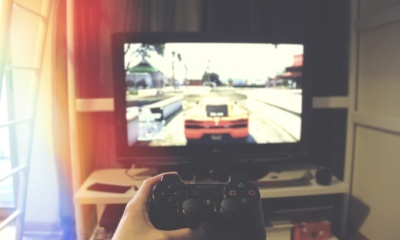 Why Do Players Enjoy Being Challenged By Games?

Suzanna BowlingAugust 12, 2020
Read More
Scroll for more
Tap
The Humans Now Visiting Family For Holiday Dinner is Drama
Dames At Sea There’s Something About You