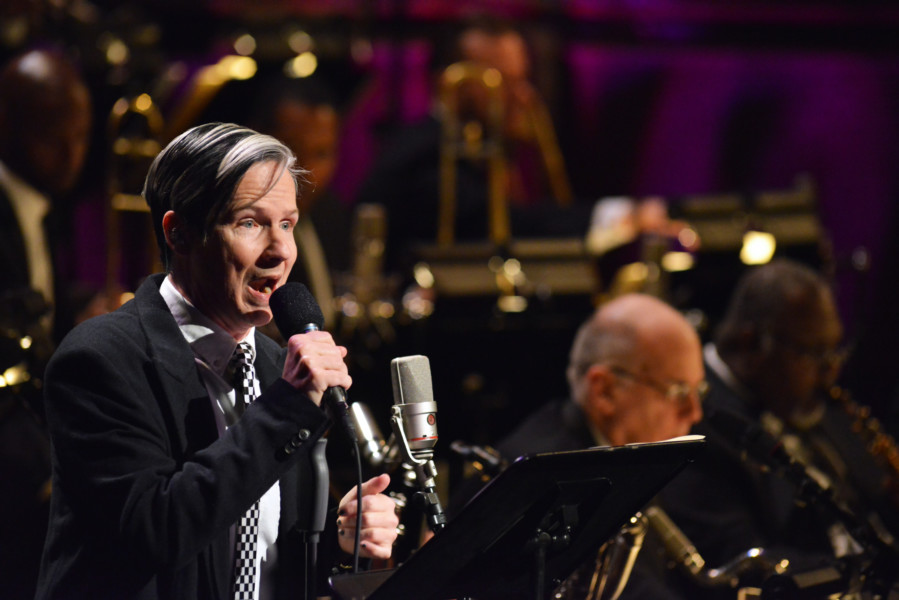 Jazz at Lincoln Center Orchestra saxophonist Ted Nash, a visionary composer at the top of his game. His creation for the JLCO, The Presidential Suite, earned him Grammy Awards for Best Large Ensemble Jazz Album and Best Instrumental Composition in 2017. The performance piece last was a world premiere of his new work, Transformation, featuring Wynton Marsalis and award–winning actor and personal friend Glenn Close.

This original work was inspired by pieces, curated by Close, exploring the idea of transformation in the tangible and intangible sense, from chaos to order, darkness to light, hatred to forgiveness.

Starting the night out with the text also by Ted Hughes Creation (from Tales from Ovid) delivered by Ms. Close and Wayne Brady led to Nijawwon Matthews being created and made into man.

Conrad Aiken’s Preludes for Memnon, XIX had Ms. Close showing off why she is so admired.

Eli Nash’s Dear Dad told of Nash’s transformation into a transgender man and the struggles and complications of being one’s self. This was a reading of the letter he wrote to his father, Ted Nash, coming out as a transgender man. Morgan Sullivan read this piece on the night I saw it.

Judith Clarke’s One Among Many read by Amy Irving was the most satisfying of the night both musically and lyrically.

John Cameron Mitchell and Bryan Weller’s piece had Mitchell performing about an addicted nun, a piece performed at an earlier date by Patti LuPone on a program he had called Anthem. Ted Nash did this arrangement of this piece for the big band so Cameron could come sing for us.

Nijawwon Matthews on I See What I Am, showed off his serpentine fluidity and was breathtakingly athletic.

Matthew Stevenson wrote and performed his own piece Rising out of Hatred which told of a white supremacist giving up his racism. Agin powerful pieces that offer hope to achieving acceptance.

Adriane Lenox wowed on Lullaby (from The Wild Iris), with the text by Louise Gluck and music by Brian Byrne arranged by Ted Nash. Her voice soared and hit some powerful notes to resinate into the hall.

Tony Kushner’s Perestroika: Act 5, Heaven I’m in Heaven (from Angels in America) bookended the piece with Ms. Close and Mr. Brady ending the evening with a prolific end.

Nash’s scoring was innately jazz infused with that big band music of the 21st century.

Transformation with Glenn Close and Ted Nash was commissioned by Jazz at Lincoln Center with the generous support of the Howard Gilman Foundation.

This project is supported, in part, by an award from the National Endowment for the Arts and by public funds from the New York City Department of Cultural Affairs in partnership with the City Council.

You can see Transformation with Glenn Close and Ted Nash tonight at Rose Hall, as well as Sunday Feb. 1st. To get tickets visit the Jazz At Lincoln Center website