Transformed by Irish Sean Nos Singing, Musician Clarissa Riddles/Purcell Redefines Her Style For All Her Audiences 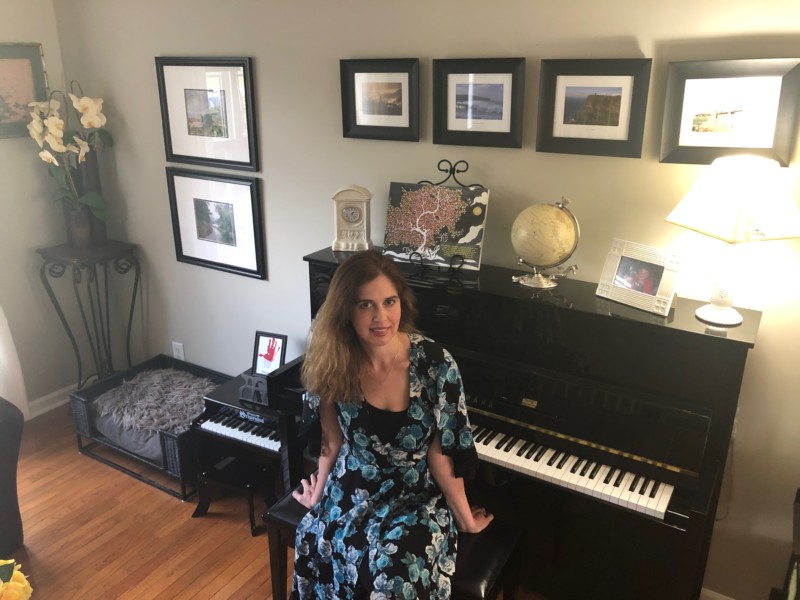 Transformed by Irish Sean Nos Singing, Musician Clarissa Riddles/Purcell Redefines Her Style For All Her Audiences

Sometimes, a musician comes across the computer screen which produces a profile not just because of the music but the backstory, too. That was certainly the case for singer/songwriter Clarissa Riddles (nee Purcell) who not only found her voice through jazz but traditional Irish music as well. 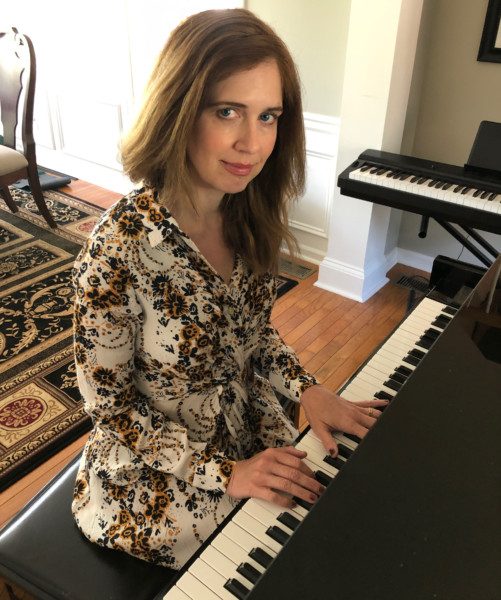 Based in Nashville, the classically trained pianist and vocalist wrote the songs on her latest record, “Be Still My Soul,” “as a tribute to God and the scripture which had brought her out of an intense personal struggle into a new life.”

That provocation was confirmed by Widerside Productions’ Matt Wilder — producer of this album: “When I first met Clarissa years ago, her talent was immediately clear. A gifted and diverse singer, songwriter and painter, who, like so many great artists, had a self-destructive streak and struggled with addiction. I believe dealing with internal turmoil is part of what drives many great artists to create.

Over the years we’ve both been through many life changes —  and in Clarissa’s case finding sobriety, getting married, having a child, and most of all, turning her life over to God as she understood him [to be]. I was thrilled when she approached me about making an album about redemption, recovery and faith.

“I recognized my own struggles in hers and in her surrender. These Celtic-flavored songs are like beautiful mystic upwellings rising from her soul as she was born into a new life. It’s healing music that envelopes and comforts you with grace, humility and beauty. A true work of art by a great artist I consider myself blessed to collaborate with.”

So upon listening to Clarissa’s melodically rich vocalizations of these recently released songs, a search into her past led to lots more releases and songs. From jazz-inflected compositions to her Irish-influenced recent productions, Riddles/Purcell is an artist-performer worth exploring.

The late 30-something grew up in Northern Virginia, near Washington DC, Fairfax, and the Annandale area. Now, the Nashville resident Purcell works part-time at the YMCA and is a full-time mother. Now that her daughter is turning eight and in school, she’s been able to commit more time to music. “I have always made money on the side with creative pursuits, little jobs, playing background music for restaurants, and selling artwork.

“Recently, I have been able to make a little extra by working for commercial music placements, advertising and some work for music library/sync licensing. But it’s been sporadic; hence the YMCA gig.” 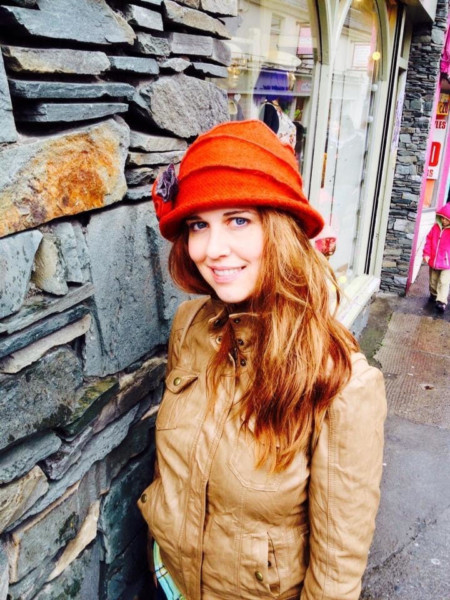 CR: I’ve done music my whole life, different genres, classical training, etc. I grew up in a musical family. We were exposed to mostly classical music. My dad was a well known baritone singer and entertainer who could play and sing almost any request from the great American songbook. My mom had a beautiful voice and sang in the church choir along with us kids.

I spent a lot of time from junior high onward making up songs and accompanying myself in the singer/songwriter fashion. My first love with songwriting was in the folk tradition. A return to that with this latest album, while being something novel, was a familiar ground with the simple melody and poetic lyrics I often wrote in my younger days. I went on to study jazz piano at University of Tennessee under the tutelage of renowned pianist and composer Donald Brown who had played with Art Blakey’s Jazz Messengers. He encouraged me to pursue composing and we often traded ideas and tunes.

Q: You’re just building your new identity now — where do you see it going?

CR: With this latest album, I feel like I have stumbled upon what I was really meant to do, both artistically and from a spiritual perspective. I just wanted to clarify that. When I first conceived this album project, it was after being inspired by the music section in the movie “Brooklyn,” where Iarla o Lionaird sang a Sean-nos song, which was a kind of hauntingly beautiful melody and lilting in the voice that I had never heard before. It absolutely blew me away. It really thrilled my soul, and it had been such a long time since I had felt inspired by music that way.

Then I discovered another Sean nos singer on the Irish John Murray show. I ended up learning this same Gaelic folk song that she performed, and later e-met Saileog Ni Cheannabhain, the gifted singer on the show who introduced many to the distinctly Irish tradition of Sean-nos singing. Later, I had the opportunity to take a few lessons from her during the Covid lockdowns via Skype.

It was then that I was inspired to make an album that was a return to the early American hymn tradition, incorporating these lilting variations in the melody line (also known as ornamentation in sean-nos). The result is an amalgamation of American and Irish singer/songwriter tradition.

I had arrived at a crossroads in some personal struggles and in my addiction — and what appeared to be an end-of-the-road financial crisis. These hymns are meant to be an intimate, personal tribute to God, as he walked me through a series of struggles and helped me to overcome my suffering with his grace.

I also had the generous help of an old friend and talented producer, Matt Wilder, who had been around to see me when I hit rock bottom. He had worked with me back then, when my drinking problem kept getting in the way. When he saw how seriously I was committed to recovery, I was able to record these songs at his studio on a tight budget, after closing, just singing and playing piano together by myself for all the takes. He then selected my best live takes.

We would later add Grammy award-winning fiddle player Jenee Fleenor and London Symphony musician/composer John Mock to the recordings. We are planning on hiring a backing band for future performances.

I obviously want to grow my audience and reach out to as many people as possible. In such a divided world we live in now I would like to restore some belief that there is something bigger out there that will bring us peace and serenity. I hope my songs focus on something other than politics. My hope is that this music will help “restore us to sanity” — myself included.

Q: Is your music Irish with American influences or American with Irish influences?

CR: I am an American with Irish highlights. Yes, my husband is from Dublin, but I grew up in northern Virginia. My heritage is largely Irish/Scottish/and English according to my family tree.

Of late I see my main influence is Sean nos Celtic and spiritual music. I was not exposed to much American pop music  growing up so I think my main influence is 1940/1950 blues, jazz and old school jazz standards of the Frank Sinatra era. Plus Ella Fitzgerald, Lena Horne, Billie Holliday, Peggy Lee and Etta James to mention just a few.

Growing up we had season tickets to Kennedy Center, and I was exposed to opera, symphonic music and performed in Handel’s Messiah along with family members at Columbia Baptist Church.

So old church hymns like “Amazing Grace,” classic composers of the Romantic era such as Chopin, and Rachmaninov and singers such as Eva Cassidy and Barbara Streisand were influences as well.

But my many visits to Ireland had a transformative impact on my music going forward. The wistful beauty of the landscape, the romance of the storytelling tradition in Ireland’s music were all very inspiring.

And meeting Chris had a similar impact on me as well. Chris came to the USA in 1990 but his feet are still planted firmly on Irish soil. All his family are there and he would bring me to seisuns in Kerry, Clare and Galway. A favorite stop off in Ireland is Gus O’ Connor’s pub in Doolin.

I was very drawn to the Sean-nos’ style of singing and love listening to local Irish musicians, The Cranberries, Enya, Saileog O Cheannabhain, Iarla O Lionaird and the traditional Irish group ‘Danu From County Kerry.

Q: How did you two meet?

CR: I met Chris later on after college at a small party with close friends. We hit it off right away. We have been visiting his large Irish family in Dublin ever since 2011.

It was there in places like Doolin, Dingle and the West coast of Ireland that I learned about Irish seisuns. With my jazz background of improvisation, I was able to incorporate this beautiful, highly-ornamented singing style into my new album, “Be Still My Soul.” It is a bit of a challenge when recording to not change up the phrasing on each take though.

Purcell is my married name, Riddles is my maiden name. I use Clarissa Purcell for the ‘Be Still’ album and all my recent music with the ‘Celtic Spiritual’ influence. I use Clarissa Riddles on all my Jazz compositions.

This project was a new genre for me but I come from a very musical background, having sung and played piano since I was young. I grew up singing and playing church hymns. I started doing original music around 12 years of age. And then I majored in jazz piano in college.

Q: After having done this record, what plans do you have in the immediate and with your overall career.

CR: My future plans include finishing an album of love songs with producer Matt Wilder and the completed production of 10 more songs of this same kind that we’re already in the process of finishing — along with some favorite old American hymns.