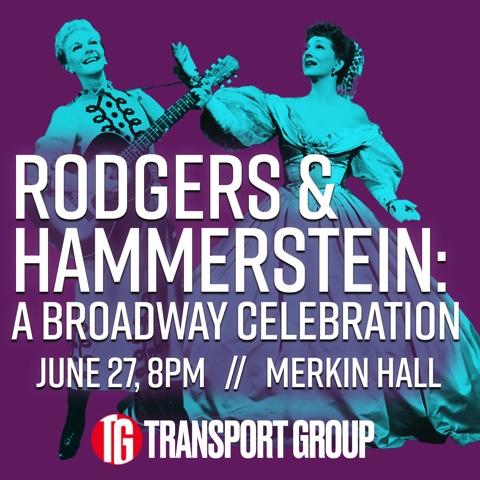 Transport Group presents Rodgers & Hammerstein: A Broadway Celebration will be the next installment in The Anne L. Bernstein Concert Series.  The evening will feature a cast of Broadway stars backed by a 24-piece orchestra performing the original orchestrations of selections from Oklahoma!, Carousel, South Pacific, The King and I, The Sound of Music, Cinderella, and more. Transport Group’s concert series features favorite musical theatre scores presented with the original full-scale orchestrations sung by Broadway stars, and behind-the-scenes theatre lore of the original productions and creative teams.

Baayork Lee, original Broadway cast member of A Chorus Line and The King and I, and Paolo Montalban, co-star of ABC’s film adaptation of Cinderella, seen on Broadway in The King and I, will co-host the evening.

Along with the musical performances, the show will feature backstage stories and lore about the original productions, featuring special guests connected to the original stars and creators. Jack Cummings III, Transport Group’s artistic director, will direct. The evening, written by Hannah Oren, will also feature musical direction by Joey Chancey.

For more information and to purchase tickets, click here

Suzanna BowlingJanuary 24, 2023
Read More
Scroll for more
Tap
The Drama Desk Awards and You Are There
Museum of Broadway Announces Opening Date