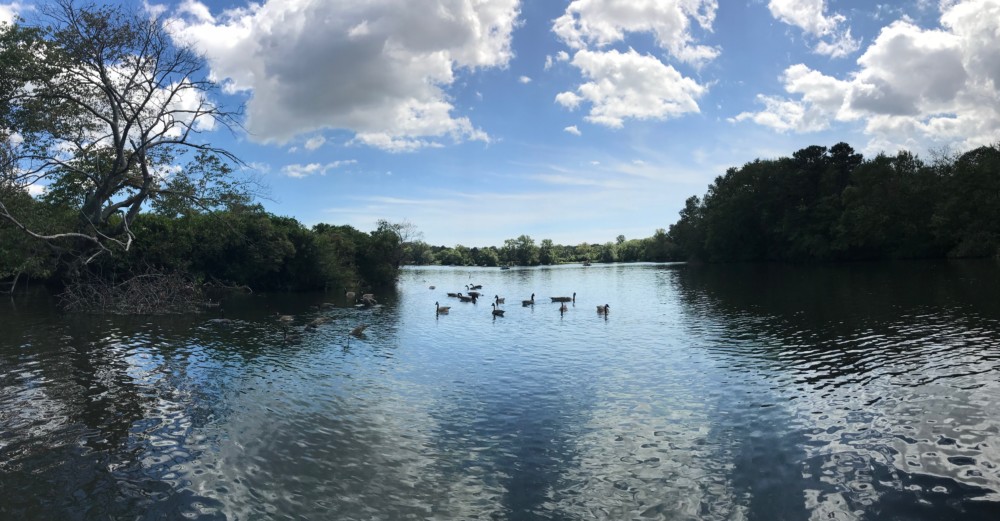 Belmont Lake State Park, located in West Babylon is a 463-acre day use park bisected by Carll’s Creek and Belmont Lake. The park, established in 1926 had been owned by August Belmont and served as farmland for some of Belmont’s equestrian activities. Robert Moses chose this park to establish the regional headquarters for all state parks on Long Island in 1935, which serves the public today for region-wide permit sales, park administration and as headquarters for the New York State Park Police.

Heckscher Park, is located at Prime Avenue and Route 25A, is considered by many to be the “Central Park” of Huntington village.

A gift to the people of Huntington by the late financier and philanthropist August Heckscher and his wife Nannie A. Heckscher, the eighteen (18) acres of parkland and the Heckscher Museum of Art is one of the focal points for culture, education and social activity in Huntington. The park passed from the Heckscher Trust to the Town of Huntington in 1954 and has been under Town stewardship for more than a half century.

Norman Levy Park and Preserve is a man-made park on the South Shore of Long Island in Merrick, New York. The park is situated on a hill and has excellent views of the Manhattan skyline and Long Island. Norman Levy Park and Preserve was once a landfill but was transformed to a park space in 2000. The park is the highest point on Long Island’s South Shore, and has an average altitude of around 120 feet. From this highest point, the New York City Skyline, Jones Beach, the Oceanside landfill can be seen and more.

The park has many groomed trails which take visitors to the top of the hill. Along the trails, there are many exercise stations for the more active visitors. For a more leisurely visit, one can take a tour around the park with one of the park rangers. This tour includes trip to the pier which extends into the bay, a view of Long Island’s horizon, and a clear view of Manhattan Island. Other amenities include fishing, bird spotting, kayaking (June–August), and hiking. Dogs and pets are not allowed in the Park and Preserve.

The park has Nigerian dwarf goats that are walked around the trails multiple times a day by one of the park rangers. The goats keep the overgrowth of the grass, bushes, and weeds at bay. The park also has guinea fowl to control the tick population as an alternative to insecticides.

The park is known as a peaceful mini getaway. It is great for families of all sizes who wish to spend a day walking trails or seeing animals. The preserve is home to a variety of animals such as goats, birds, foxes, etc. Foxes are rare to find, but more sightings have occurred in recent years.