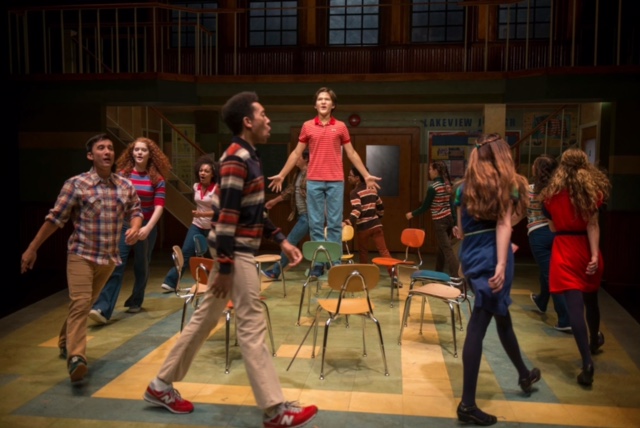 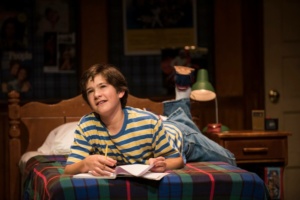 The suburbs are on fire. Not sitting back and allowing all the pre-Broadway tryout shows to happen downtown, Writers Theatre is throwing down their own gauntlet with the production of Trevor The Musical, a bright and highly engaging show about the importance of finding your own voice while simultaneously negotiating the path of burgeoning teen-aged sexuality. Broadway’s Marc Bruni (Beautiful: The Carole King Musical) directs this lovable tale, joined by book and lyrics writer Dan Collins and music by Julianne Wick Davis. Mining frequent laughs and a few legitimate tears, Trevor was inspired by the Academy Award-winning short film that detailed the backstory of what would become The Trevor Project. For those not in the know, The Trevor Project is the nation’s only accredited crisis intervention and suicide prevention organization focused on saving young LGBTQ lives. Please don’t let this deter you in any way from seeing this show. Trevor is far from a dry and sterile public service announcement. While not ready to open on Broadway tomorrow, this show is well on its way. 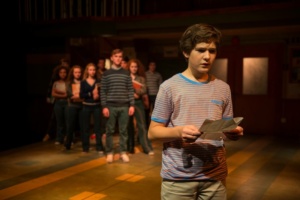 Flashing back to 1981, decades before the all too familiar “It Gets Better” campaign was ever conceived, Trevor (Eli Tokash) is a 13 year old, highly likable boy, dealing with both his emerging sexuality and an obsession with the current diva of the day, Miss Diana Ross (Salisha Thomas). Fantasizing musical numbers based on her biggest hits, Trevor dealt with his problems head on, fueled with the ever familiar soundtrack of “Do You Know?,” “It’s My Turn,””Upside Down,” “Endless Love” and “I’m Coming Out.” Mara Blumenfeld’s character costumes ranged from the early 1980’s student classrooms to the glittery gowns of Miss Ross, inspired by many of Diana’s own over-the-top wardrobe. 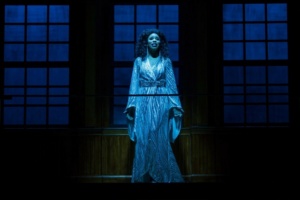 The action centers around the fictional Lakeview Junior High 17th annual talent contest. Trevor is excited to sing and dance and “get discovered,” just like Diana Ross, only to have his dreams dashed by a short-sided teacher who bumps his act in favor of football playing students prancing and preening around in pink tutus.  Ouch. The script frequently points out “Trevor’s not a wimp. He’s artistic” so he decides the show must go on and volunteers to be the choreographer for the football team’s foundering ballet act. At rehearsals, our pubescent hero quickly develops a crush on the star quarterback, Pinky (Declan Desmond).  All falls apart when Trevor is betrayed by his best friend, Walter (Matthew Uzarraga) who shares Trevor’s secret notebook with the class’s mean girl du jour. Merciless teasing by his classmates, detached and uncomfortable conversations with his parents and a suicide attempt ground much of the second act. 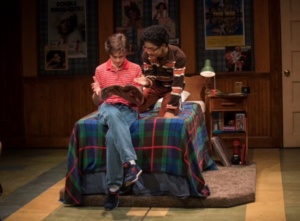 The tone here needs a bit more fleshing out. Trevor The Musical doesn’t go as deep or as dark as this year’s Broadway hit, Dear Evan Hansen. On the plus side, is is not as squeaky clean, with only surface charm, like a Nickelodeon show. The common ground of the material is with linking the fact that pubescence is tough for everyone. The point here is made all the stronger and more resonant by making the hero someone who dares to be a little different. Who cannot relate to that? The stakes in the story just need to be played with a little more gusto and pathos. Trevor’s inevitable suicide attempt registered as just an emotional speed bump. That particular moment must pack more of a significant wallop to really have this production mean something more credible. 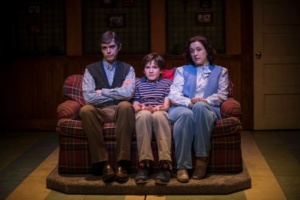 Trevor as a character and Trevor The Musical share the fact they are both on the journey to finding their own unique voice. The original songs are just as engaging as Diana Ross’ familiar hits. The young, Windy City acting ensemble, are at the top of their game. Donyale Werle’s set design and Josh Prince’s choreography also deserve mentioning, although I was immediately struck by how the opening set, Trevor’s bedroom, closely mimicked the opening of Dear Evan Hansen. To paraphrase from another Diana Ross song, Writers Theatre is quickly showing Chicago who is “The Boss” when it comes to producing engaging and highly enjoyable original musical theater. 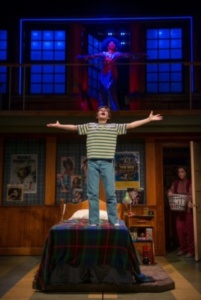 Trevor The Musical is now playing at the Writers Theatre through October 8, 2017