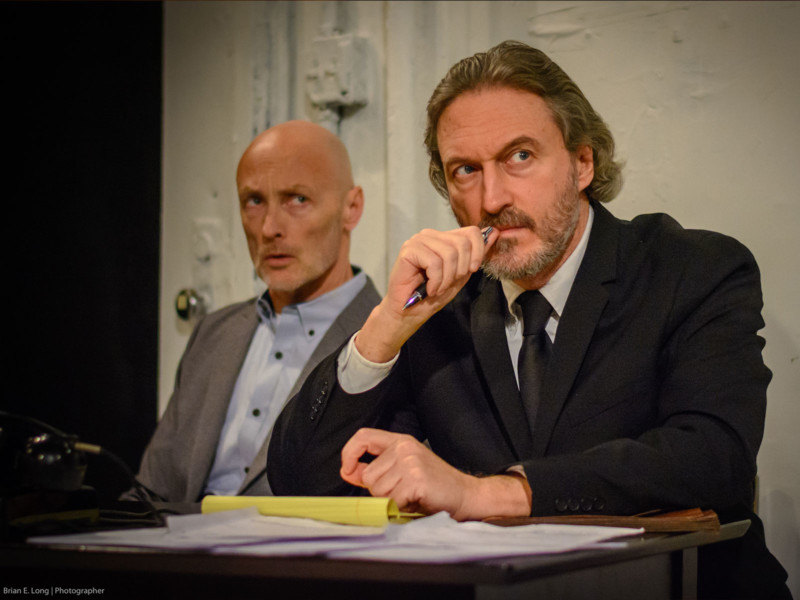 Trial: An Excellent and Challenging Drama

Trial: An Excellent and Challenging Drama

THML Theatre Company finishes its first year with Ashley Griffin’s new play, Trial. The play addresses child abuse and suicide in a Kafka-esque version of the afterlife complete with inexplicably slow bureaucratic processes. Directed by Lori Petty, the exceptional cast brings to life the gray shadow that coincides with what we desperately wish to be black and white.

Arcadia (Ashley Griffin) is waiting for her papers to be processed, and she has been waiting a long time. When her number finally is called, she learns that she must be judge and jury for the trial of her father’s soul. Richard Evans (Malcolm Stephenson) is – like many abusers – irresponsible and defensive of what he calls love. He is represented by Mr. Olin (George Drance), the chief executive of the upper level. The prosecutors are Lucy (Gisela Adisa), who manages the lower level, and her assistant Valentine (Ryan Clardy). At the beginning of Richard’s trial he pleads not guilty. Lucy makes the circumstances clear by saying, “We are here to determine your damnation, or salvation, based on the long-term effect of your actions, and how much harm they have actually caused. Not your guilt.” However, the examination is not limited to Richard’s actions, it also includes Arcadia’s actions. As they revisit the instances of abuse that eventually led to Arcadia’s suicide, and Arcadia is confronted by the life-altering effects that her suicide had on others, specifically on Tommy (Ryan Clardy), her closest friend in life, and Margaret (Jennifer Bareilles), her mother. Lucy and Mr. Olin prosecute and defend without rules because they are in a battle for souls not justice. Valentine’s humanity confronts him and Arcadia must determine her father’s eternal fate.

The heart and truth of this incredible story lies in this quote: “Trials will, in the best circumstances, bring what is purest, truest, most beautiful to light.” 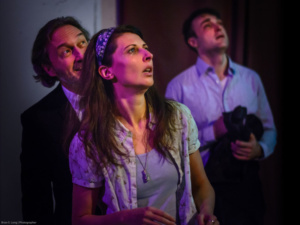 Griffin draws a very clear timeline of events, and demonstrates explicitly that the abuse and the suicide are linked, yet her characters seem determined to examine them as separate events that would’ve been avoided if different choices were made. Arcadia and Richard are forced to acknowledge and to take responsibility for how their actions affected people around them. While this is crucial to the events of the play, the most unfortunate thing is that it seemingly pits the consequences of suicide against the consequences of abuse. Both acts are considered damnable in the world of the play, but surely that cannot make them equal in the circumstances of this, or any, case. It was easy for me to be frustrated that sexual abuse was being defended by an all knowing God-like figure while suicide was defended by the equally omniscient Devil-like figure. And yet, the play is crafted so well, I suspect that such a reaction is intended by the piece. 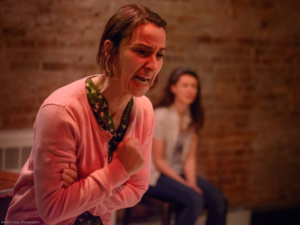 Jennifer Bareilles in Trial by Ashley Griffin at the Beckmann Theater.

The universe of the play is well dictated and maintained through dialogue, circumstance and the use of legal jargon. There is a satisfying irony in the circumstance that the performance is held inside a courthouse. The intimacy of this makeshift theatrical space heightens the raw emotion of the play. The set, a minimal and plain courtroom, serves the absurd bureaucratic afterlife very well. Everything is black and white, with the occasional and pointed pop of color in Tyler Carlton Williams’ costumes: Lucy’s red bra, Richard’s gray suit jacket, Valentine’s purple tie, Arcadia’s blue jeans.

Under Lori Petty’s direction, the actors succeed in portraying the darkest and brightest elements of humanity. Ashley Griffin’s performance is driven and impassioned. Gisela Adisa’s fiery interpretation of Lucy strikes both fear and awe into my heart. Malcolm Stephenson brilliantly demonstrates the twisted nuances of Richard’s humanity. George Drance creates Mr. Olin with firm grace and physical ease. As Margaret speaking to her daughter’s grave, Jennifer Bareilles delivers a raw, unsettled and heartbroken moment that I cannot truly describe.  Ryan Clardy shines best in his passionate speeches and his ability to make Valentine small next to Adisa’s Lucy is a credit to both of them. 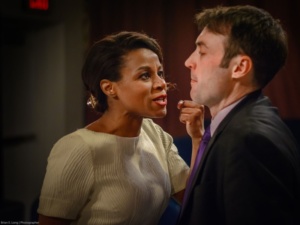 Gisela Adisa and Ryan Clardy in Trial by Ashley Griffin at the Beckmann Theater.

While handling two very relevant and challenging topics, Ashley Griffin’s play begs the question: What would a victim decide if they could determine their abusers eternal fate? Of course the caveat is that if damning the abuser, the victim damns themselves – but is it justice to give the abuser salvation?

Mr. Olin reminds us throughout the trial, “In the course of justice, none should see salvation.” This leads to where human hearts must go for complete healing: Forgiveness.

Though its run is finished, I hope and expect that Trial will soon have another production.