Trial On The Potomac –The Impeachment Of Richard Nixon 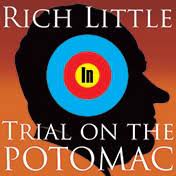 Trial On The Potomac –The Impeachment Of Richard Nixon

Trial On The Potomac by George Bugatti now playing at the St. Clement’s Theatre is an interesting show in that it brings the audience a “What If ?” moments. What if, then president Nixon wanted to go to trial instead of stepping down? What if, all the damning evidence against John Dean, John Sirica and Leon Jaworski was brought forward to possibly exonerate the president? These were some of the questions and answers given last night. The theory of the plot was a good one, however, not always well executed.

The acting was also uneven, as was Josh Iacovelli’s direction. At times the actors seemed robotic. Rich Little, who plays Richard Nixon seemed tired and lethargic. Richard Wingert as Senator Edward Kennedy, accent went in and out and cheapened the role as a result.

The Trial On The Potomac has many things to recommend it within the 90 minute excursion. The set by Josh Iacovelli, the lighting by John Lant and solid acting by Kelsey Lea Jones as Diane Sawyer were all done well. Also handling their roles well were Tom Gregory as Peter Rodino and a very good Nick Mauldin as Geoff Shepard.

However the script and the acting is so inconsistent, it is not enough to sustain the show. John Ramaine as Gordon Liddy and a worse Matthew Hammond as John Dean were badly directed by Iacovelli. Neither actor captures who Liddy or Dean were. The mannerisms, cadence and style are never there in this play.  Here we actually have a play that is pro Nixon; the concept in of itself is shocking and the questions asked never sustain momentum.

A wonderful speech at the end by Rich Little never really makes up for the lackluster conversations that he has with Dean or Shepard. Iacovelli has John Sirica as Victor Colicchio acting more like John Gotti than a trial judge. Paul Caliendo as Judge Warren Burger is very subdued and flat, though he is humorous. Here lies the inconsistency of Bugatti. Some of the performers, as well as the supporting team are also brought into question… Why was Judge Andrew Napolitano brought in to be a consultant? Napolitano was a Bergen County Judge who consulted on FOX News, before being thrown out for sexually harassing a young man. How can his insight into an off Broadway show be of any use? Geoff Shepard himself lived through the Watergate hearings, so why didn’t he do the technical consulting?

If Trial On The Potomac is ever to succeed it needs to be rewritten and needs direction that captures the individuals that were brought into play.

Trial on the Potomac––The Impeachment of Richard Nixon opened on August 6 and plays through September 5 at Theatre At St Clements, 423 W 46th Street.

Magda KatzAugust 6, 2022
Read More
Scroll for more
Tap
Andrew Cuomo, Henry Morris and A New Musical Called A Turtle on a Fence Post
Will Hurricane Henri Pass Over or Will it Cause Havoc on Broadway’s First Opening.