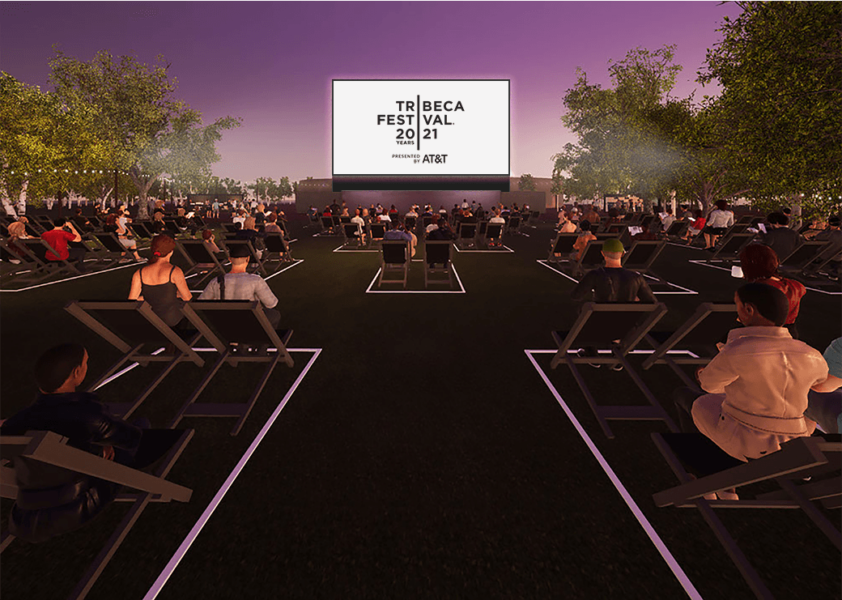 It’s happening, and you’re invited! In a historic culmination of New York State’s statewide initiative, NY PopsUp, to bring live entertainment back, the Tribeca Festival™, presented by AT&T, announced plans today to transform prominent locations into an expansive 12-day multi-screen outdoor celebration. The event will take place from June 9-20 as the first major film festival held in person bringing filmmakers, artists, storytellers and audiences together under the New York skyline.

For its 20th anniversary and in partnership with some of the most iconic outdoor sites, festival-goers will safely gather together once again to celebrate with their fellow New Yorkers as we welcome back the entertainment community. The following venues have been confirmed to take part in the expanded footprint and innovative approach to screening films: Brookfield Place New York, Pier 57 Rooftop, The Battery, Hudson Yards (Manhattan); Empire Outlets (Staten Island), and The MetroTech Commons (Brooklyn).

In addition to the venues, Tribeca will host community screenings in all New York City boroughs including the Bronx and Queens using traveling 40-foot state-of-the-art LED cinemas, the first mobile HD screens in the country.

“After the 9/11 attacks, the Tribeca Film Festival helped set the stage for New York City’s incredible comeback – and helped spur a new golden age for film and TV production across the five boroughs,” said Michael R. Bloomberg, founder of Bloomberg LP and Bloomberg Philanthropies and 108th mayor of New York City. “This year the festival is once again shining a spotlight on our city’s resilience and creativity, and just as we’ve done from the start, Bloomberg is glad to support this great tradition, which will once again help lift our city’s spirit.”

“It’s only natural that The Tribeca Film Festival will be among those leading the return of arts and culture, as it has consistently enriched the lives of New Yorkers since its inception, by celebrating and showcasing our city,” said Jessica Lappin, President of the Alliance for Downtown New York. “This year’s festival at The Battery is just the beginning, as Lower Manhattan continues to develop as a new center of gravity for the arts.”

Since its founding twenty years ago to help revitalize lower Manhattan through the arts, Tribeca has created opportunities and championed emerging storytellers. The tradition will continue this year with diverse programming, immersive exhibitions, games, films, concerts and a commemoration of the Juneteenth holiday, which will fall on Closing Night for the first time.

“Our collaboration with Tribeca allows us to utilize our innovative technology, to connect audiences with underrepresented voices and storytellers,” said Patricia Jacobs, President – Northern Region, AT&T. “We’re thrilled to be able to share our platform, which is committed to amplifying the voices of the next generation visionaries, with a live, in-person audience again!”

“The story of the Tribeca Film Festival, like New York’s, is a story of resiliency and reinvention. The festival was born from the idea that we can mourn and heal through the power of storytelling and coming together as a community. Today, as we emerge from the worst of a horrific pandemic, it’s events like the Tribeca Film Festival that will give New Yorkers hope for a better and brighter future in the days ahead,” added Scott Rechler, CEO and Chairman of RXR Realty and Chair of the Regional Plan Association.

Tribeca Festival is working in concert with the New York State Department of Health to ensure all public gatherings are in full compliance with COVID-19 safety protocols.

Suzanna BowlingJanuary 29, 2023
Read More
Scroll for more
Tap
The Glorious Corner
What to Watch in The New Year: March 30