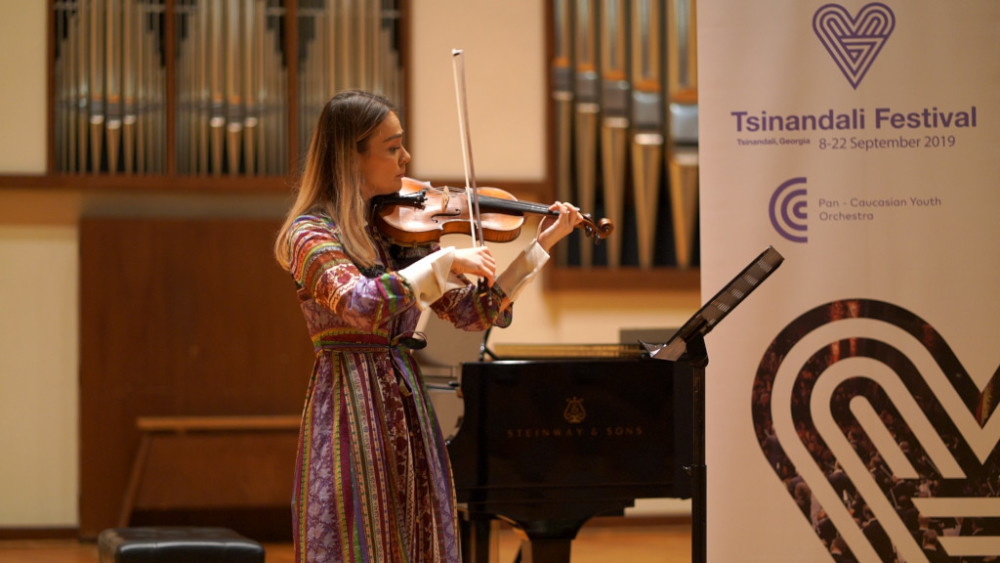 Gifted young musician descended on Almaty, Kazakhstan to compete for a spot on the first ever Pan-Caucasian Youth Symphony Orchestra, which will be featured at the Tsinandali International Festival of Classical Music this September near Tbilisi, Georgia.

The preparations for the first annual Tsinandali International Festival of Classical Music have kicked into high gear with auditions recently being held in Almaty for candidates hoping to be chosen to play in the event’s inaugural Pan-Caucasian Youth Symphony Orchestra (PCYO).The classical music festival, which will be held in the fall, will feature world-class musicians from around the world and highlight young talent from the surrounding Caucasus region.

The 2019 classical music festival will be held September 8-22 on the Tsinandali Estate located in the Kakheti region of Georgia near Tbilisi. The estate, its historical and award-winning vineyard, and its grounds have been beautifully restored through the efforts of generous benefactors. In preparation for the festival, a modern open amphitheater, a concert hall, and a luxury hotel were constructed at the venue. The festival will feature over 30 scheduled concerts to be held over a 15-day period. The event will showcase some of the most prominent and talented international musicians under the direction of Gianandrea Noseda, one of the most sought-after conductors.

More than sixty candidates from Kazakhstan and Russiaauditioned for the Pan-Caucasian Youth Symphony Orchestra in Almatyat the end of March, the biggest auditions held so far for the event. Previous auditions were held in Ankara, Istanbul, Baku, Tbilisi, Kiev, and Yerevan. The final live auditions were held in Vienna at the beginning of April for students originally from the Caucasus region who are currently studying abroad in Europe.

Each candidate performed before a remarkable panel of esteemed experts in classical music including world-renowned Kazakh composer YerkeshShakeyev, the assistant music director of the Tsinandali Festival, Claudio Vandelli, and professors from the National Conservatory.

With so many talented prospective candidates, Tsinandali Festival co-founder YerkinTatishev said, “Both Yerkesh and Claudio have told me how impressed they were by the standard of musical talent on show. I do not envy the decision they have to make, but I wait with anticipation to see which musicians are awarded this opportunity.”

The Pan-Caucasian Youth Symphony Orchestra will feature musicians between the ages of 18 and 28.The Tsinandali Festival, the non-profit organization behind the event has committed to paying for the application, participation, travel and accommodation costs of all members chosen to participate in the PCYO.

Music is What Unites Us

These young musicians will be given the opportunity to showcase their talent on a global stage, studying and playing with international professional musicians and conductors. The Tsinandali Festival will draw talent and audiences from across Kazakhstan, Ukraine, Turkey, Georgia, Armenia, Azerbaijan and the world. The goal of the festival’s Pan-Caucasian Youth Symphony Orchestra is to recognize and promote talented young performers from all over the Caucasus region, with the language of music acting as a conduit between Europe and Asia.

According to the organization, “The Festival is designed to create rare opportunities for young musicians from the Caucasus and neighboring countries to explore the world of music and advance their musical education through professional seminars and master classes taught by some of the brightest names in today’s classical music.”

At the auditions in Kiev, Maksym Tymoshenko, Rector of National Music Academy of Ukraine a supporter of the Tsinandali Festival reaffirmed the goal of the festival, “Classical music and arts- that’s what unites us; It is very important for us to participate in the festival.”

Shining a Spotlight on Young Musicians

Before the Tsinandali Festival, the members of the PCYO will be invited to participate inthree weeks of lessons and rehearsals with notable musicians from some of the world’s leading professional orchestras. During the classical music festival in September, the Pan-Caucasian Youth Symphony Orchestra is scheduled to perform fiveconcerts in the amphitheater venue.

After the Almaty auditions concluded,Tatishev proudly exclaimed, “I am certain that in years to come we will look back at this new Pan-Caucasian Youth Symphony Orchestra as the moment when stars were born.”

Many of the musicians who participated in the auditions for the youth orchestra were excited about the prospects of performing in an ensemble of international musicians. They hoped that the orchestra would provide them with an opportunity to advance their abilities and make lasting connections.

Irina Rostomashvili, a candidate who auditioned for the youth orchestra said, “I think this festival will give young people a unique chance to enhance their career growth and development… this project will be a big challenge and experience for me, certainly, if I am selected.”

Margaryta Yakovenko a potential PCYO member added, “Communication with new faces and musicians is a very interesting process. This project is a new challenge for me making way for further growth and development.”

To the sixty young candidates who auditioned in Almaty, being selected to join the Pan-Caucasian Youth Symphony Orchestra would mean the opportunity of a lifetime: toperform with their peers, under the guidance of legendary conductors and beside the classical music stars of today as part of a multi-national orchestra.

The musicians are expected to be notified within the coming months regarding those selected to perform with the youth orchestra at the Tsinandali Festival.