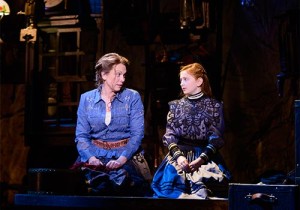 In seeing Tuck Everlasting, I was angered. First the show has been negated in the design elements and they are wonderful. The set by Walt Spangler is magiccal and fun. The costumes by Gregg Barnes are the best this season and the lighting by Kenneth Posner is mystical. Second, the orchestrations by John Clancy are so pedestrian and miss the mark that I was driven crazy. I sang what should have been in the orchestrations to my companion to illustrate what was driving me so insane and he immediately got the problem. Everything falls flat and nothing soars. The music by Chris Miller (The Burnt Part Boys which I loved!) takes motifs from A Christmas Story the Musical and Daddy Long Legs and is sloppy in its execution. I have this horrible habit that if another song is stolen I will start singing the other songs right after the show. 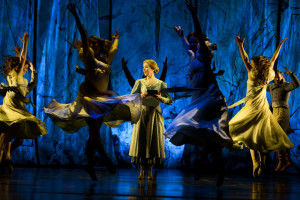 This show had so much potential, with gorgeous, sweeping ballets that director/ choreographer Casey Nicholaw (Aladdin, The Book of Mormon) a interesting story line about a young girl who befriends a family with a mysterious secret. The musical is based on the popular 1975 children’s book of the same title by Natalie Babbitt, which became a Disney film in 2002. There are marked differences between musical and film. Claudia Shear (Dirty Blonde) and Tim Federle, book stays closer to the book than the film. 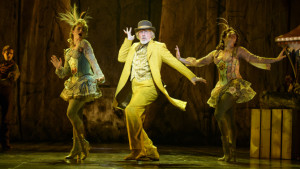 Set in the late 19th century, we follow Winnie Foster (Sarah Charles Lewis) age 11, whose father has died and she is being forced to be a good girl and morn. When a carnival proprietor, “ the Man in the Yellow Suit” (a fun Terrence Mann), invites Winnie see the fair, her mother (Liza Jaine), refuses. Winnie rebels and sneaks outside the gate where she meets 17 year old Jessie Tuck ( a charismatic Andrew Keenan-Bolger) in the wood. Jesse and his family, his mother, Mae (Carolee Carmello), father, Angus (Michael Park); and 21-year-old brother, Miles (Robert Lenzi) are all trapped at the age when they first drank from a mysterious spring at the foot of a tree in the New Hampshire woods. They have not aged and they cannot die. In fear that Winnie will reveal their secret, the Tucks kidnap the her, but Winnie and the family bond.

Winnie’s parents send the dimwitted town constable (the scene stealing Fred Applegate), and his assistant, his son (the goofy Michael Wartella), to find her.

In a neatly tied up storyline the circle of life continues as each moves on. 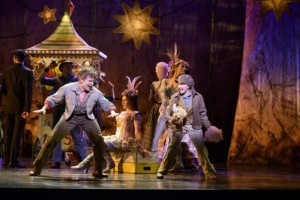 Another problem with this show is nothing ever really emotionally connects. Not the story, not the score and not the performance by Sarah Charles Lewis who we should love and be invested in. The child is talented but is missing that “it” factor that made us love the numerous Annie’s. What does succeed here is the design elements and the work by the uber talented Casey Nicholaw.

Tuck Everlasting, is not a bad show it’s just not a memorable one.