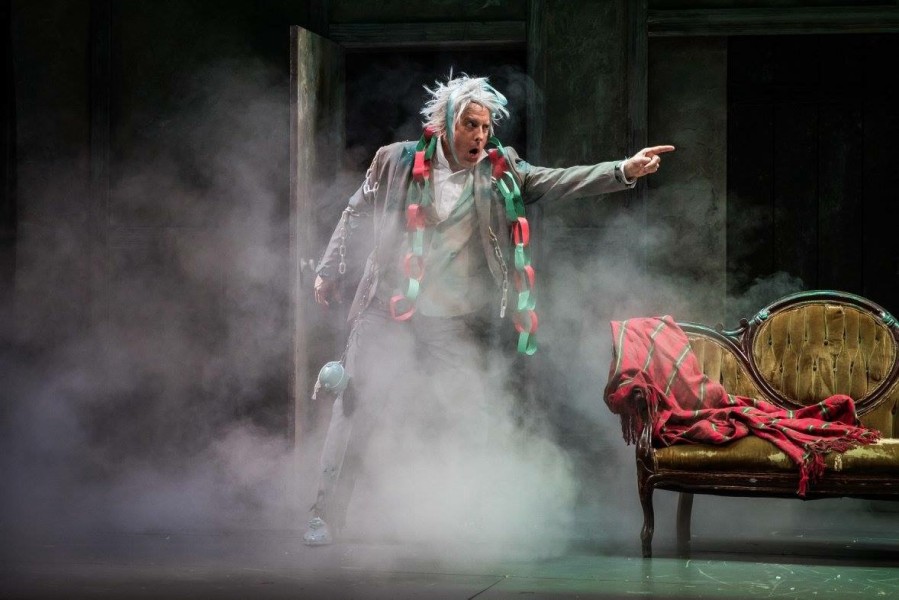 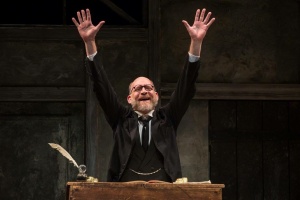 In what should have been a fabulously hysterical partnership, The Goodman Theatre and The Second City joined forces to present the holiday send-up Twist Your Dickens by former Emmy Award winning writers for The Colbert Report, Peter Gwinn and Bobby Mort.  Now in its third season and decisively mocking the Goodman’s holiday classic,  A Christmas Carol, Dickens turned up the political rhetoric this time out, yet still sold the audience a little short.  Wildly uneven in tone, like a run-of-the-mill episode of the current season of Saturday Night Live, Twist Your Dickens delivered sparse genuine belly laughs. Directed by Ron West, this project fused the classic characters of the 1843 Dickens’ Classic; Scrooge, Bob Cratchit, and Tiny Tim with characters from the 1965 Charlie Brown Christmas Peanuts holiday special and the dolls from the Island of Misfit Toys, all presented in the Second City’s trademark improvisational stylings. 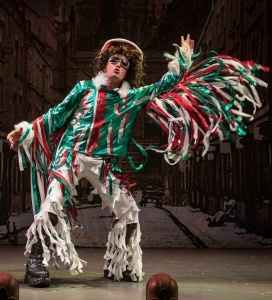 The primary story of the 110-minute parody, set the stage for the retelling of the Ebenezer Scrooge (Ron West) tale. Only this time, Bob Cratchit (Greg Matthew Anderson) wore a Bluetooth and secretly plotted to murder Scrooge and make it look like a fake suicide. (Hysterical, huh?)  We do meet the Ghost of Jacob Marley, who read quips from his red-and-green-paper chains covered with pre-show audience confessions of their personal transgressions.  “Bet against the Cubs this year” drew the loudest audience groans. “Now I know where Donald Trump gets his ideas” quipped one of the cast. 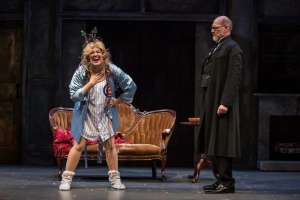 Next up, the Ghost of Christmas Past, fusing the look  of MC Hammer and Prince, stuck in the 1980’s (Joel Boyd) and the Ghost of Christmas Present (Carisa Barreca) a hung-over, hot mess of a specter. Clearly influenced by Amy Schumer, this trashed blonde spewed momentary wisdom in between moments of dry heaving and beer swigging. Couldn’t Scrooge be a dear and hold her hair like a real friend? Finally, The Ghost of Christmas Future appeared, a shell of a ghost who could only communicate through an overly long game of Charades. 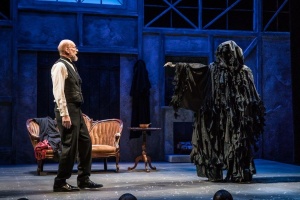 Dispersed within the main narrative were moments peppered with levity.  Giggles were shared during the dancing nun, Sister Act walk on cameo.  Chuckles occured during many of the commercial spoofs, a hoot was had during the segment where the “Island of Misfit Toys” were being adopted by bigger misfits, the skinny jeans wearing, irony loving hipsters of Lincoln Park.  A legitimate  howl happened during the politically incorrect but amusing piece where Tiny Tim (Sarah Dell’Amico), painstakingly walked across the stage and into his anxiously awaiting father’s arms. This is the show’s best use of the daring and hysterical physical comedy Second City is known for. Finally the “Peanuts” sketch introduced us to the never before seen “lost ending” of the 1965 Charlie Brown Christmas special,  in which the Peanuts gang lambasts an overly reverent Linus.  From their stage pulpit, Charlie Brown, Pigpen, Lucy and Sally comically attack Linus for shoving his religion down their throats.  Even Peppermint Patty chimed in with a chorus of “your book forbids me to love who I love. By the way, it’s Marcy!”  That line met with the biggest laughs of the sketch.  Each short skit nailing their punchlines within a brief time frame, not overstaying their welcome like the overly drawn out and underwhelming principle story of Scrooge.

It is unfortunate that Twist Your Dickens felt like a largely hit-and-miss production. The writers need to pick a tone and stick with it.  I suggest whittling down the Scrooge story by about 20 minutes and presenting more, short, concise and (most importantly) funny,  holiday themed sketches, united under the umbrella of “The Second City Screws the Holiday.”  In its current state, it felt they want to screw the audience out of an hour plus of their lives.  Twist Your Dickens worked  best in fleeting moments, not as an overall cohesive piece.  Not a total dud, more like a bad first date, one can hope gets more engaging the more you drink.  The end result, sadly, a surprisingly awkward evening of yuletide foolishness told with a holiday twist.

The Second City at The Owen Hall at Goodman Theatre Twist Your Dickens is currently playing through December 30, 2016.

Daniel Craig Shines, Boys Will Be Boys and All The Girls Die In Sam Gold’s Othello
The Curious Incident of the Dog in the Night-Time – Witty Dialog, Dynamic Visuals