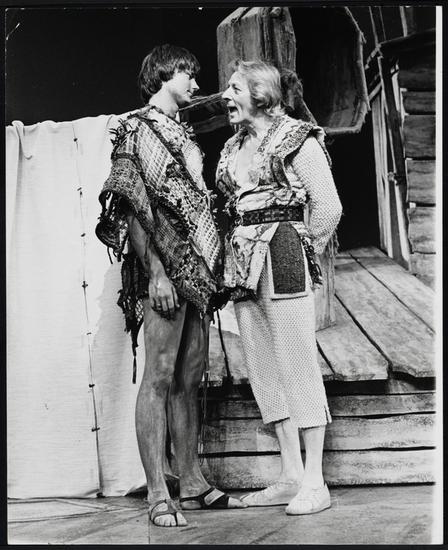 Sandi Durell and TheaterPizzazz.com will present Tony Award nominee Walter Willison and Tony Award winner Karen Ziemba in Two By Two: The 50th Anniversary Virtual Concert to benefit The Actors Fund. The 1970 Broadway musical has music by Richard Rodgers, lyrics by Martin Charnin, and book by Peter Stone. The virtual holiday event will premiere at 2:00 PM on Christmas Day, Friday, December 25 through Monday, December 28 on facebook.com/Metr0politanZoom and continue on facebook.com/TheaterPizzazz where it can be viewed for FREE. Donations to The Actors Fund in any amount are strongly encouraged.

Legendary composer Richard Rodgers (Oklahoma!, Carousel, The King and I) entered his seventh decade of writing for the theatre with this fresh retelling of the Biblical story of Noah, based on the play The Flowering Peach by Clifford Odets. This show about God deciding to destroy the world to save it, because people are not taking care of themselves, each other, the animals, or the planet, is perhaps even more relevant today than it was when it was written, during the era of civil rights marches and protests against the senseless war in Vietnam. The musical tells the story of Noah and his family as if they might be a dysfunctional family living in Brooklyn today, and the building of the ark is only the first of Noah’s many daunting challenges in a journey that isn’t always smooth sailing. At its heart, Two By Two is a show about family and about love.

Two By Two opened at The Imperial Theater on November 10, 1970, starring Danny Kaye, Joan Copeland, Walter Willison, Marilyn Cooper,Harry Goz, Michael Karm, Madeline Kahn, and Tricia O’Neil. Conceived and Directed by Joe Layton, the show ran for 351 performances. In a theatrical season that also included Company and The Rothschilds, Two By Two was one of only two musicals (the other was No, No, Nannette) that made a profit and were thus declared hits by Variety. John Chapman, writing in the Daily News, called it “A musical to be loved, to be cherished. Magnificent!”; the legendary Walter Kerr wrote in the New York Times, “Two By Two fills the house with magic and music”; Variety dubbed it “The best musical in some time, with music only Richard Rodgers can write”; and William Glover of AP deemed it “One of Richard Rodgers finest musicals. A show to treasure and love.”

The Actors Fund is a national human services organization that fosters stability and resiliency, and provides a safety net for performing arts and entertainment professionals over their lifespan. Programs include social services and emergency financial assistance, health care and insurance counseling, housing, and secondary employment and training services. During this challenging time of COVID 19, when so many who work in the performing arts find themselves out of work and in need of financial assistance and medical help, the Actors Fund is there for them. Visit actorsfund.org