U2 Hits The Big Apple and Gets Ready for the Oscars

U2 Hits The Big Apple and Gets Ready for the Oscars 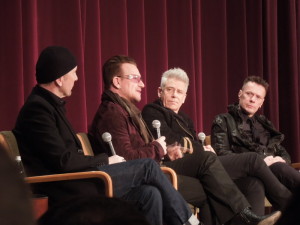 U2 had a busy few days in New York City. On Sunday the band had a very intimate session at the DGA with some very lucky guests invited to a screening of Mandela: Long Walk to Freedom.

Hollywood Reporter and The Weinstein Company hosted the fantastic day where the band enthusiastically talked about their love for the world-renowned leader. The passion and inspiration that went into the making of the Oscar nominated best original song “Ordinary Love” was heartfelt and expressed with such meaning by Bono, The Edge, Adam Clayton and Larry Mullen Jr.

Shortly after the appearance the beloved band had a special rooftop performance at Rockefeller Center for Jimmy Fallon’s premiere night of the Tonight Show. During the debut they played “Invisible.”

Next up the group will be playing at The Oscars in front a global audience. U2’s exclusive Oscar show performance will be the first time the band will perform the song live. The Oscars, hosted by Ellen DeGeneres, will air on Sunday, March 2, live on ABC.