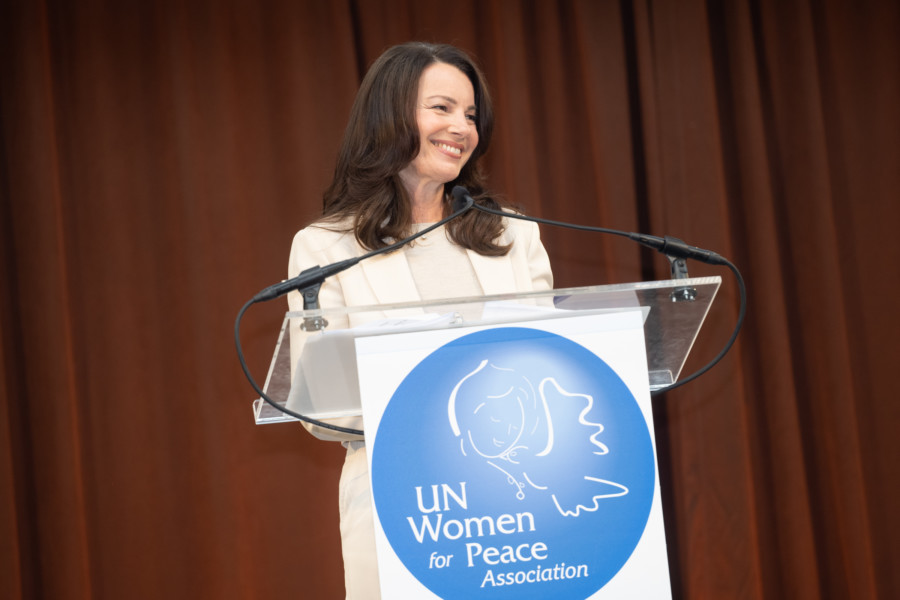 This was not another ladies who lunch moment in the Big Apple. This was the best power lunch this season and it was all for a phenomenal cause.

On May 3, hundreds of attendees gathered inside the grand of hall of Casa Cipriani for the UN Women For Peace Association Annual Awards Luncheon. The afternoon was graced with an uplifting and harmonious affair that was one for the history books. In this moment in history the gratitude and love that filled the room was deeply appreciated and revered.  Ambassador Rosemary DiCarlo, Christian Elliott, The Honorable Joanne King Herring, Vicki Hollub, and Kevin Hyland OBE were all respectfully honored by  UNWFPA for achievements that have been the touchstone of change in modern times. 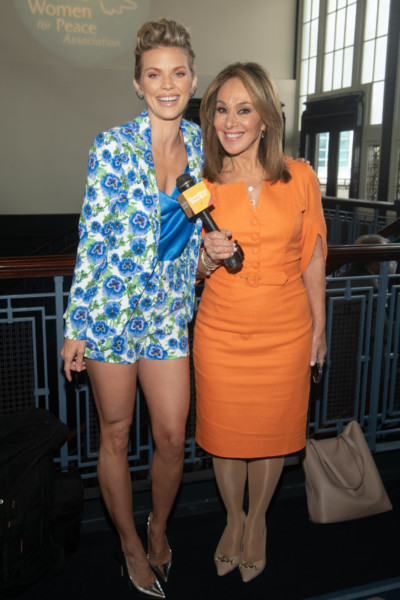 Rosanna Scotto of FOX 5’s, Good Day New York emceed the delightful day that showcased the incredible strength of the women who were celebrated. Sitting over lunch, the crowd took in moving performances in between speeches that brought forth an equal amount of tears, laughter and inspiration. Wendy Moten sang Somewhere Over The Rainbow and country star Drew Baldridge sang his original song She’s Somebody’s Daughter.

As each award was presented the crowd was uplifted to their feet and applauded. It was a fitting tone for the harmonious event that made each guest realize the truly powerful mission statement of the organization.

Moments like when actress and SAG-AFTRA President, Fran Drescher, made the keynote address made the men and women in the room listen with awe. Sharing her personal story of rape survival, she brought to attention the much needed work that continues to be needed around the world. 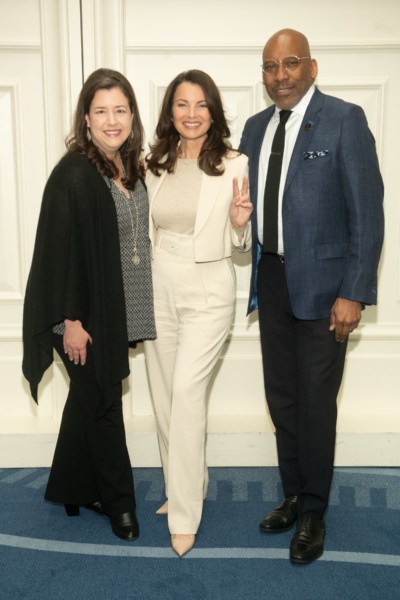 A key highlight of the lunch was when UNWFPA President Rema DuPont presented a posthumous Legacy Award to UNWFPA Founder, Dame Muna Rihani Al-Nasser. Her husband H.E. Mr. Nassir Abdulaziz Al- Nasser, with their son, Aziz Al-Nasser in the audience, accepted the award in her honor. 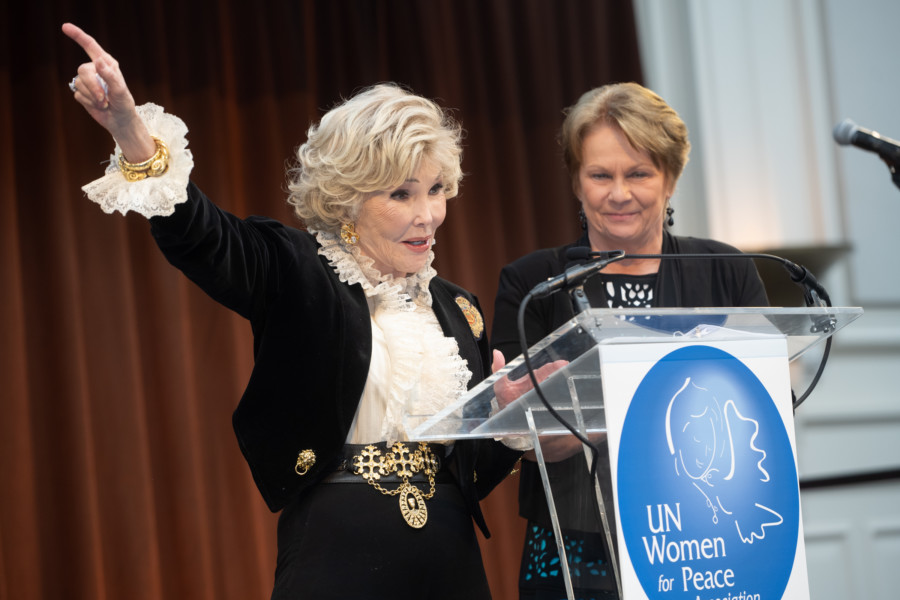 Other notable honorees included Ambassador Rosemary A. DiCarlo received the Leadership Award for her decades of work as a peacekeeper and an advocate for women’s rights. In 2018 DiCarlo became the first woman to assume the position of Under-Secretary-General for Political and Peacebuilding Affairs at the United Nations. DiCarlo has served at the United States Department of State as Deputy Permanent Representative to the United Nations with the rank and status of Ambassador Extraordinary and Plenipotentiary, and represented the United States at the Security Council, General Assembly and other United Nations bodies. Past recipients of this award include First Lady of Panama, Lorena Castillo Garcia de Varela, Deborra-Lee Furness, Secretary-General H.E. Mr. Ban Ki-moon. 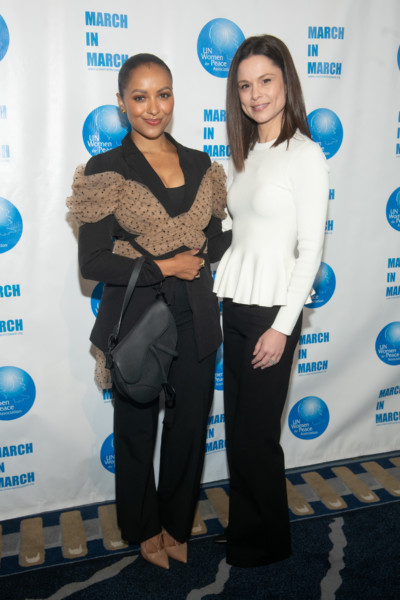 The Honorable Joanne King Herring received the Lifetime Achievement Award for her outstanding achievements and years of work to end human trafficking and for helping survivors, which are disproportionately women and children. Herring is a political activist, philanthropist, diplomat, and former television talk show host. While she was born in a world where women had limited choices, she rose to form the most significant alliance that brought an end to the Soviet invasion in Afghanistan and saved America from an economic catastrophe. Long known within the corridors of power in both Afghanistan and Pakistan, Herring’s freedom fighting role in southwest Asia was brought to a wider American audience when the true-life 1980s story of Charlie Wilson’s War was retold in 2007, with Oscar winning actress Julia Roberts playing the remarkable Herring. Past recipients of this award include Eve Branson, Loreen Arbus, and Francine LeFrak. 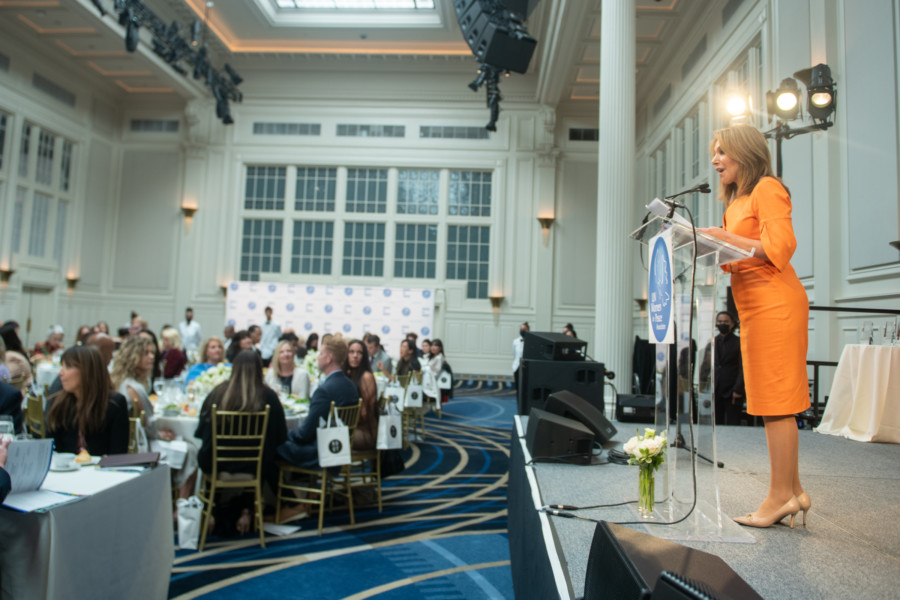 Kevin Hyland OBE received the Advocacy Award for his remarkable contributions to ending violence against women and girls everywhere. Hyland dedicated over 30 years to public service, including leading London’s Human Trafficking Unit. Hyland was appointed as the UK’s first Independent Anti-Slavery Commissioner and was elected as Ireland’s representative to the Council of Europe Independent Group of Experts for Trafficking. He was instrumental in the establishment and remains chief advisor to the Santa Marta Group, a high-level partnership between law enforcement agencies, faith groups and civil society launched by Pope Francis at the Vatican. He leads several international anti trafficking projects chairing the Responsible Recruitment Group of the Institute of Human Rights and Business and the Island of Ireland Human Trafficking Project and provides strategic leadership to the OSCE in producing global victim support guidance.

Vicki Hollub received the Humanitarian Award for her outstanding achievements in rescuing over 500 girls, and their families, by bringing them safely from Afghanistan to Portugal. Hollub was the first woman to head a major American oil company as President and CEO of Occidental Petroleum. She also serves on the boards of Lockheed Martin and the American Petroleum Institute, and is a stewardship board member for the World Economic Forum’s Platform for Shaping the Future of Energy and Material, and a member of the Oil and Gas Climate Initiative. Past recipients of this award include Leyla Ilham Aliyeva, Dayle Haddon, HRH Princess Camilla of Bourbon Two Sicilies, and Paul Bettany.

Christian Elliott received the Media Award for his heroic efforts to end modern-day slavery. Elliot created the global campaign to combat human trafficking, entitled Can you see me?. The campaign reached millions of people, equipping the general public to recognize indicators of human trafficking, and report suspected scenarios. Elliot is Global Development Officer of A21, a nonprofit organization works to end in human trafficking, with offices in 14 countries worldwide.

This was truly one lunch that will never be forgotten.